100 years from Greco-Turkish War! Greek landing at Smyrna – when a joyful day became a reason of war 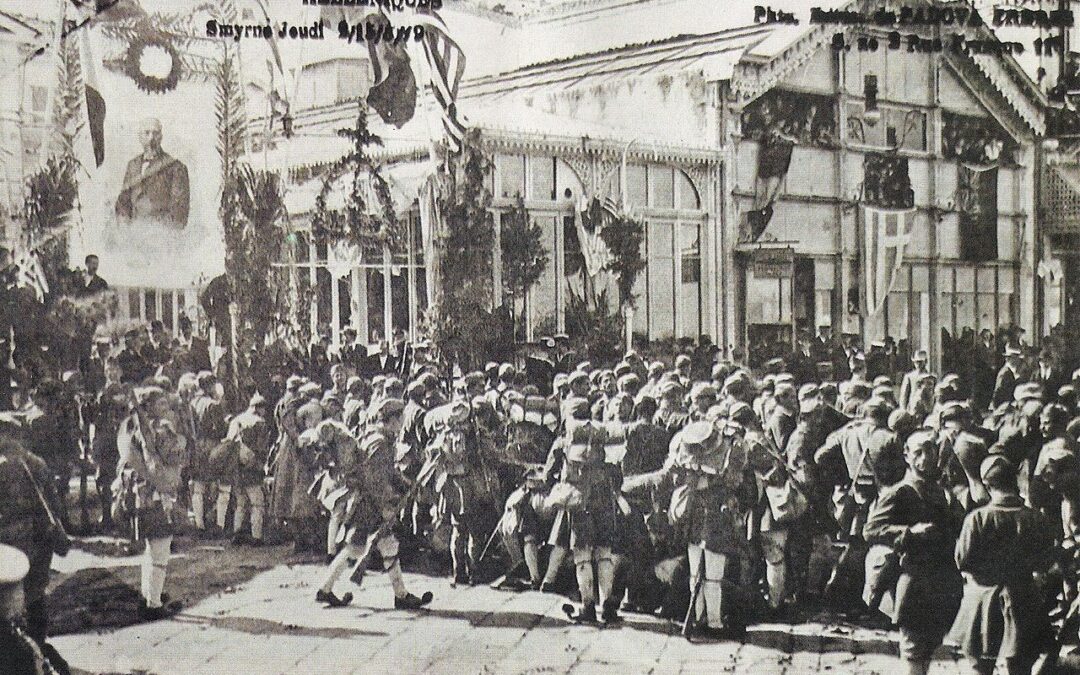 May 1919 is the month when Greco-Turkish War began. Is one of the most bloody episode from the end of the first world war. The Greco-Turkish War of 1919–1922 was fought between Greece and the Turkish National Movement during the partitioning of the Ottoman Empire after World War I between May 1919 and October 1922. It is known as the Western Front  of the Turkish War of Independence in Turkey and the Asia Minor Campaign  or the Asia Minor Catastrophe in Greece.

The Greek campaign was launched primarily because the western Allies, particularly British Prime Minister David Lloyd George, had promised Greece territorial gains at the expense of the Ottoman Empire, recently defeated in World War I.

The armed conflict started when the Greek forces landed in Smyrna (now Izmir), on 15 May 1919. They advanced inland and took control of the western and northwestern part of Anatolia, including the cities of Manisa, Balıkesir, Aydın, Kütahya, Bursa and Eskişehir.  Their advance was checked at the Battle of Sakarya in 1921 by forces of the Turkish national movement. The Greek front collapsed with the Turkish counter-attack in August 1922, and the war effectively ended with the recapture of Smyrna by the Turkish forces and the Great fire of Smyrna.

At the end of World War I (1914–1918) and with the Armistice of Mudros that ended the Ottoman front of World War I, the allies began a series of peace talks focused on the Partitioning of the Ottoman Empire. During Paris Peace Conference, 1919 the Italians landed and took over Antalya and began showing signs of moving troops towards Smyrna. When the Italians left the meeting in protest over other issues, British Prime Minister David Lloyd George and Greek Prime Minister Eleftherios Venizelos pushed a concocted report in the peace negotiations alleging that the Christian populations were under direct threat to convince France and the U.S. to support a Greek takeover of the Aidin Vilayet centered in Smyrna. Borders and terms of the Greek occupation were not decided but in early May 1919, the Allied powers supported Greek troops landing in Smyrna and moved a number of battleships into the area to prepare for the landing.

While negotiations were still in progress, Venizelos informed Clemenceau of the deterioration of the situation in Aidin Vilayet, where the local governor, Nureddin Pasha, was ordering Muslim groups to commit excesses against the Greek population. The British intelligence was also informed of the deterioration of law and order in the area and the Italian role in provoking this situation. In early May, Venizelos reported instances of Italian–Turkish cooperation to the Supreme Allied Council and requested that Allied vessels should be sent to Smyrna. This request, although initially accepted by the Council, was not carried out immediately. Under this context, the British Prime Minister and the Foreign Office were the main supporters of the Greek landing, with the purpose “to restore public order and forestall the massacres”.

On the afternoon of May 11, 1919, the Commander of the 1st Infantry Division of the Hellenic Army, positioned in Kavala, Colonel Nikolaos Zafeiriou, received orders for the operation. The next morning, the landing force, consisting of 13,000 soldiers, as well as auxiliary personnel, 14 transport ships and escorted by 3 British and 4 Greek destroyers, headed to Smyrna. Zafeiriou’s order to his soldiers, who learned about their destination only after the departure, was the following:

„Wherever we may go, we must know that we are going to liberate our brethren under alien rule. The enthusiasm filling our hearts is fully justified but any improper manifestation of this enthusiasm will be entirely out of place. We must not forget that when we reach our destination we shall meet Turks, Jews and Europeans of other denominations. Everybody should be treated in the same way. In a little while they will become our brothers as if they were true Greeks.”

On May 14, 1919, the Greek mission in Smyrna read a statement announcing that Greek troops would be arriving the next day in the city. Smith reports that this news was “received with great emotion” by the Greek population of the city while thousands of Turkish residents gathered in the hill that night lighting fires and beating drums in protest.

Later, translations of proclamations issued by the Turks during this occasion, showed that the intention was not purely pacific resistance. The same night, several hundred prisoners, mostly Turks, were released from a prison, with the complicity of the Ottoman authorities and Italian major in charge of the prison. Some of them armed purchased arms from a depot near the barracks.

The Greek occupation of Smyrna started the following day, where thousands were gathered on the seafront, waving Greek flags on the docks where the Greek troops were expected to arrive. The Metropolitan of Smyrna, Chrysostomos of Smyrna blessed the first troops as they arrived at 08:00.

A colonel, who had neither the will nor the prestige to force himself relentlessly on his men, was in charge of the operation and neither the appointed High Commissioner nor high-ranking military individuals were there for the landing resulting in miscommunication and a breakdown of discipline.

Most significantly, this resulted in the 1/38 Evzone Regiment landing north of where they were to take up their post. As a result, they had to march south passing a large part of the Greek crowds celebrating the landing and also the Ottoman government Konak and the barracks of Ottoman troops. A Turk fired a shot and chaos resulted with the Greek troops firing multiple shots into the Konak and the barracks.

The Ottoman troops surrendered and the Greek regiment begun marching them up the coast to a ship to serve as a temporary prison. Allied officers in the harbor reported seeing Greek troops bayoneting multiple Turkish prisoners during the march and then saw them thrown into the sea.

Prisoners were forced to shout “Long live Venizelos!” and “Long live Greece!”. Donald Whittall, a British citizen and one of the few neutral observers during the landing, remarked about the treatment of Turkish prisoners, “They were made to go through no humiliation and received a good deal”. But Whittall estimated that thirty unarmed prisoners were slaughtered. The captain of HMS Adventure reported that a Turkish officer, marching with his hands up, veered out of line. He was hit by a Greek soldier’s rifle butt on the back of his head. When he tried to stand up he was hit again and bayoneted, before the top of his head was blown off.

Violence and disorder followed the landing and Greek troops and Greek citizens of Smyrna participated in these actions. Some shops belonging to Jews were also plundered by Greek soldiers. For the days following the landing, Greek troops arbitrarily detained around 2,500 people. Looting of Turkish houses in the city and in the surrounding areas began on the night of May 15 and continued for many days after that. The Inter-Allied Commission of Inquiry reported that:

Admiral Calthorpe left the area on May 21 and on May 23, the Greek commander in the area went against orders issued by the Allies and Venizelos by ordering the expansion of military operations in Aydın and Şuhut. These operations initially did not face significant resistance, but ethnic violence erupted along the way leading to significant violence and chaos; particularly in the Battle of Aydın from May 27 until June 27, 1919.

In many areas, Greek forces demobilized the Ottoman police and then left the area resulting in Turkish mobs looting Greek property and killing Greek citizens. This was retaliation for atrocities committed by Greek soldiers and civilians in Smyrna and the surrounding area against Turks.

When the atrocities were exposed and condemned by the British House of Commons on 26 June, Venizelos faced British diplomatic pressure to conduct an official inquiry. Court martial in August 15, 1919 led by the Greek High Commissioner for the violence on May 15 and May 16 pronounced 74 convictions (including 48 Greeks, 13 Turks, 12 Armenians and one Jew).

According to the Inter-Allied Commission of Inquiry, the casualties on 15 May were as follows: Greek army (2 killed, 6 wounded); 100 Greek civilians (20 killed, 20 drowned, 60 wounded); 300-400 Turkish civilians killed or wounded.

Eyewitnesses in Smyrna reported higher civilian casualties among the Turks. The U.S. Naval Officer of the USS Arizona, which was berthed at Smyrna harbor, estimated 300-500 Turks killed with a total of 700-1000 casualties. Regarding the Greek casualties, he estimated 2 killed and 15-20 wounded soldiers, 20-30 killed and 40-50 wounded civilians Reverend MacLachlan, a Canadian in charge of the international college at Smyrna, estimated 400-600 Turks killed.

The Greek army from the first started showing the signs that they had not come for a temporary occupation but rather for a permanent annexation; to incorporate western Anatolia into Greece. After the violence in May 1919, many of the allies began to limit their support for the operation: France and Italy all became resistant to permanent Greek occupation and the stillborn Treaty of Sèvres in 1920 gave administrative control of the area to Greece, while Turkey would retain sovereignty, with permanent sovereignty to be decided after 5 years.

The Greek occupation ended when Turkish forces entered Smyrna (İzmir) on September 9, 1922, after a long and bloody war. As a result of this war, the Greek government accepted the demands of the Turkish national movement and returned to its pre-war borders, thus leaving East Thrace and Western Anatolia to Turkey. The Allies abandoned the Treaty of Sèvres to negotiate a new treaty at Lausanne with the Turkish National Movement. The Treaty of Lausanne recognized the independence of the Republic of Turkey and its sovereignty over Asia Minor, Istanbul, and Eastern Thrace. Greek and Turkish governments agreed to engage in a population exchange.