1917- The Bulgarians rob the Romanian Academy 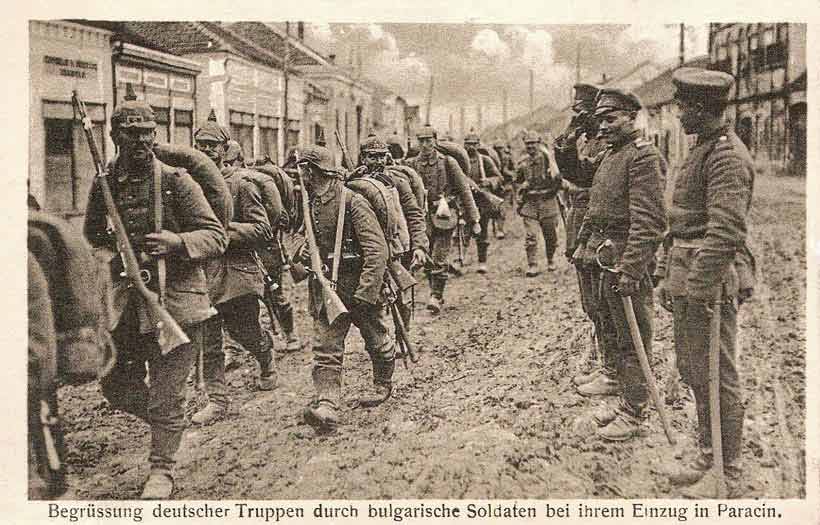 In 1917, the whole of Muntenia was forced to go into exile, in Iași, leaving behind many assets and valuable goods. Among them were many important documents of the Romanian Academy. This time, however, the Germans were not guilty of theft, but the Bulgarians and it would not be the first, because a year later, the Bulgarians would steal the relics of Saint Demetrius from the Metropolitan Church.

On the night of January 22, 1917, several Bulgarian officers forcefully enter the Romanian Academy and begin to take documents, on the grounds that they were stolen by the Romanians in their 1913 campaign in Bulgaria. Ioan Bianu, the secretary general of the Academy, who opposes the attempt, is arrested. Here’s how the event is related by Sabina Cantacuzino:“The sad ceremony had just ended and we were just learning about the theft of the documents from the Romanian Academy. Life was not monotonous to us, moving from one emotion to another, happy when it ended in spite of the Germans or their comrades.

This is what Mr. Bianu, the only guardian of the fortune left at the Academy, told me. At half past four in the afternoon, on January 10/ 23, a sergeant in the German secret police with a Bulgarian officer asked to see the Slavonic documents. Bianu asked for their identity papers, they showed a piece of paper stamped by the Command, but without the names of the perpetrators; [Bianu gave them his business card and asked for theirs. The Bulgarian, not having one , wrote his name on a piece of paper and, after looking at the room where the documents were on the shelves, asked for the keys and ordered no one to move until ten o’clock]. However, they changed their minds and evacuated all the employees, locked the doors, called the sentries waiting in the yard, put them at each door and on the director’s private apartment and left.

From ten o’clock onwards, Bianu heard them as they went up and down the stairs, carrying things. He had sent Tzigara to Bogdan, to convene the members of the Academy remaining in Bucharest at a meeting the next day at 3 o’clock. At two o’clock at night he was called by a German officer. The German asked him only to ascertain that the documents had been taken and nothing else. Bianu did not want to make such statements in the middle of the night and in such circumstances, but asked that they give him a list of what was taken. They refused.

The next day, the two thieves went to Mr. Bogdan and took from him seven volumes of illuminated manuscript. Bogdan, going with them to the secret police headquarters in the Urban Credit premises, saw all the files there. Tzigara and Lupu Costache made a complaint to Mackensen; at the same time, according to Bianu’s detailed report, the Academy drafted an official protest, which Maiorescu refused to present, but was sent to him.

A Mackensen deputy came to Bianu, asking for explanations, and if he knew that it was true that those documents were collected from our monasteries, and not taken from Bulgaria in 1878 and 1913. After the evidence was presented, he insulted the Bulgarians, who «tell us only lies». Finally, after 48 hours the assurance is given that everything will be returned, and so it was done.

This story of Bianu interests me even more because I came to him with a mission from my husband. He owned many and precious documents of the Cantacuzino family; he came to an understanding with his brother George to give them to the Academy, but he wanted first to translate them and keep a copy. By postponing this formality from day to day, I had remained with the documents in my home. They were now seriously threatened if, as they had warned us, we were all arrested and the house turned into a Turkish casino. We didn’t care anymore, but we considered that these historical pieces were part of the national heritage and that we had no right to expose them to destruction.

We could not donate them now, as there was no office of the Academy in Bucharest, but we wanted them safe. Bianu refused to take them, «because he could not fraudulently put these acts among those of the Academy and deceive the German authorities». I warmly pleaded that it was not a fraud, but an anticipation, that we were not obliged to hide our assets from the enemy who plundered us shamelessly and without any right, that only at the Academy there was an escape chance for our documents. He was irreducible in his judgment. I left indignant. I hid them in the attic, under the eaves, in a depression of the floor, where it was very difficult to reach; I had to put on a special suit and I barely got out, not remembering how I managed to squeeze my head through the beams.

I lived some very unpleasant moments, because nobody in the house knew where I was. But neither the Germans, in any of their searches, discovered them, because they didn’t even consider entering there. When the war ended  the documents were removed by cutting the beam from the attic, and later, after my husband’s death, they were given to the Academy.

I had only one condition, agreed upon by the Academy: in exchange for the 89 pieces, some of them from the time of Matei Basarab, one signed by Michael the Brave, etc., I would receive an authentic copy recognized by the Academy, for the descendants of the family. Ten years have passed and I have yet to receive a thing”.