1919: How the Romanian soldiers hanged a peasant’s sandal on the Parliament of Budapest﻿ 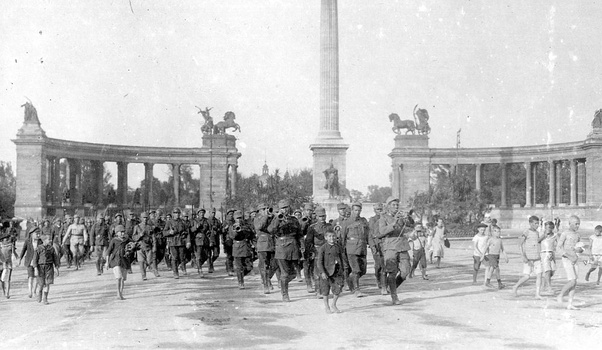 Romanian-Hungarian relations reached their lowest point in 1919 as the end of the First World War escalated the long running tensions between the two nations. The establishment of the communist regime in Russia and Bela Kun’s subsequent seizure of power in Hungary, prompted the Romanian army to intervene against its regime, as the newly formed Soviet Republic of Hungary was threatening the realization of the Great Union.

The overthrow of the Bela Kun regime, a strategic necessity for Romania

Bela Kun had gained popularity through his promises of restoration of Greater Hungary, which meant it would bring the country into conflict with its neighbours, including Romania. The Communist regime in Budapest was relying on the possibility of a war between the Entente and Bolshevik Russia and on the support of the latter.

The authorities in Bucharest were aware of the danger of having two neighbours which had no qualm in voicing their territorial claims, but most of all, their desire to use force against Romania. In this regard, the Romanian delegation in Paris requested permission to remove Bela Kun and his regime from power, but this course of action was not approved. However, the actions of the Hungarian army required the intervention of Romanian forces.

Transylvania came under the control of the Romanian army after the Great Union. Consequently, the Hungarian army attacked the Romanian troops stationed there. Kun’s plan was to occupy Transylvania in its entirety and make a junction with Lenin’s troops, which were to attack Romania in the East. But his plan was to prove itself a mistake.

The counteroffensive of the Romanian army managed to quickly occupy the cities of Carei, Oradea and Salonta, reaching the demarcation line established by the Great Powers through the Vix note on March 19, 1919. However, the Romanian commanders took the decision to advance to the river Tisa, for obvious tactical reasons: a defence on the Tisa line would have been much simpler.

The state of the two armies contributed to the success of the Romanian army’s counteroffensive. Romania, victorious in the war, and the defeated Hungary were in a totally opposite situation. The military forces of the two states were very disproportionate.

The occupation of Budapest

However, relations between Bucharest and Budapest did not straighten out. The government in Bucharest called for the demobilization of the Hungarian army, but Bela Kun was not willing to do so. Negotiations broke down and the Hungarian army vigorously attacked the defending Romanian forces on July 20, pushing them back to Oradea.

The Romanian army held out against the Hungarian offensive and started a counteroffensive. The Romanian army crossed the Tisa river and, after a week of hard fighting, went on to occupy Budapest. By occupying Hungary’s capital, Bela Kun’s regime fell apart.

The first units that entered Budapest were headed by General Rusescu. His 400 men were the only ones who controlled Budapest until August 4, when General Mărdărescu enters the capital, with a much larger force. On the same day, at six o’clock in the afternoon, there was a parade on the Andrassy Boulevard, consisting of troops from the 4th Vânători Regiment, the 23rd Artillery Regiment and the 6th Roșiori Regiment.

It seems that Iordan was not very pleased with the presence of the flag and wanted to avenge what he considered to be Hungarians injustices against Romanians. So, he came up with the idea to put one of his peasant sandals on the Hungarian flag to show everyone who was really in charge of Budapest.

He lowered the flag and personally climbed and hanged over the red-white and green flag one of his peasant’s sandal, before hoisting the flag back up. This is how the Romanian soldiers hanged a peasant’s sandal on the Parliament of Budapest.