23 July, 1914: The Austro-Hungarian Ultimatum to the Kingdom of Serbia 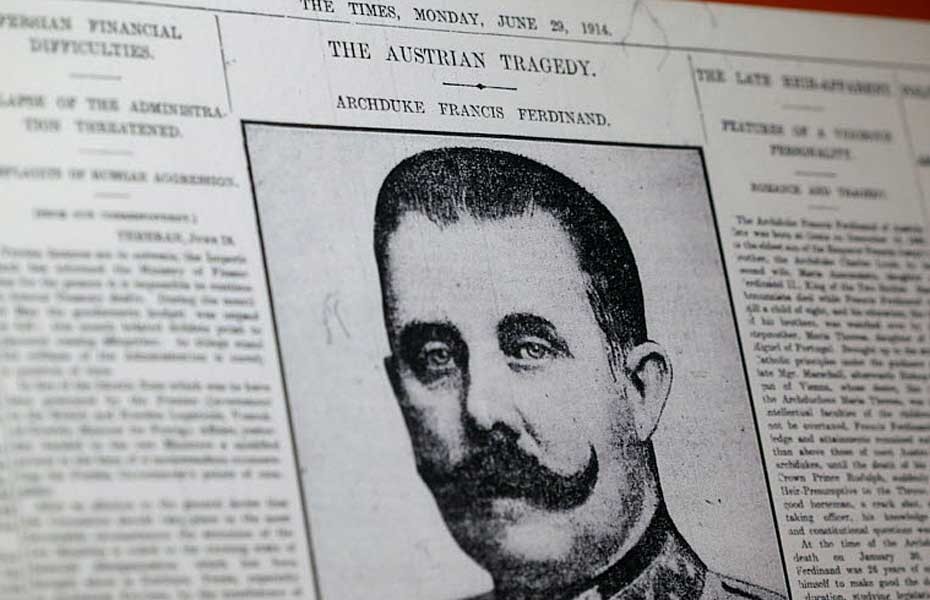 Baron Giesl von Gieslingen, Austro-Hungarian Representative in Belgrade, to Laza Pacu, The representative of President of the Ministry and Minister of Foreign Affairs. In Belgrade 10/23 of july, 1914. 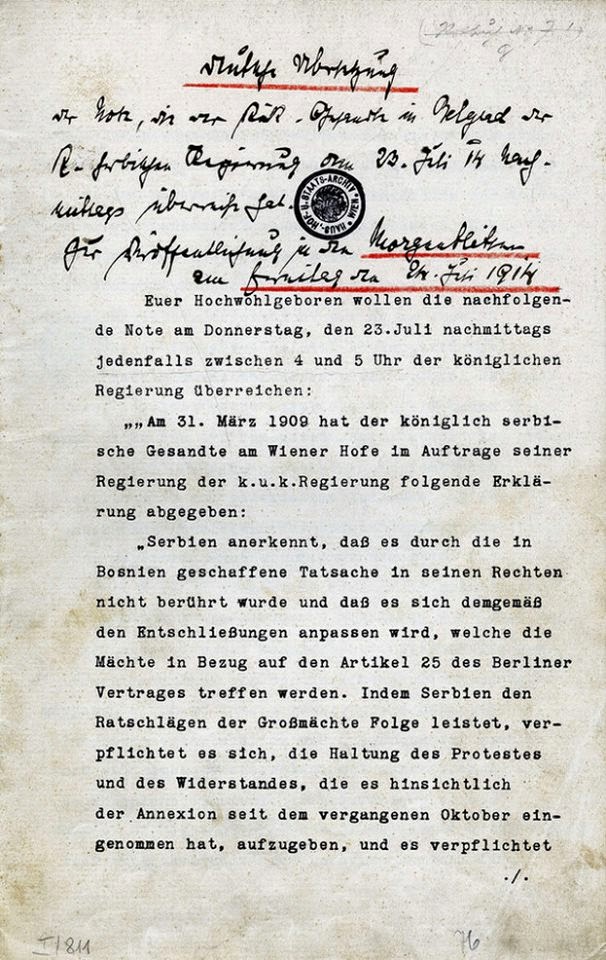 On the 31st of March, 1909, the Royal Serbian Minister at the Court of Vienna made, in the name of his Government, the following declaration to the Imperial and Royal Government:

“Serbia recognizes that her rights were not affected by the state of affairs created in Bosnia, and states that she will accordingly accommodate herself to the decisions to be reached by the Powers in connection with Article 25 of the Treaty of Berlin. Serbia, in accepting the advice of the Great Powers, binds herself to desist from the attitude of protest and opposition which she has assumed with regard to the annexation since October last, and she furthermore binds herself to alter the tendency of her present policy toward Austria-Hungary, and to live on the footing of friendly and neighborly relations with the latter in the future.”

Now the history of the past few years, and particularly the painful events of the 28th of June [1914], have proved the existence of a subversive movement in Serbia, whose object it is to separate certain portions of its territory from the Austro-Hungarian Monarchy. This movement, which came into being under the very eyes of the Serbian Government, subsequently found expression outside of the territory of the Kingdom in acts of terrorism, in a number of attempts at assassination, and in murders.

Far from fulfilling the formal obligations contained in its declaration of the 31st of March, 1909, the Royal Serbian Government has done nothing to suppress this movement. It has tolerated the criminal activities of the various unions and associations directed against the Monarchy, the unchecked utterances of the press, the glorification of the authors of assassinations, the participation of officers and officials in subversive intrigues; it has tolerated an unhealthy propaganda in its public instruction; and it has tolerated, finally, every manifestation which could betray the people of Serbia into hatred of the Monarchy and contempt for its institutions.

This toleration of which the Royal Serbian Government was guilty, was still in evidence at that moment when the events of the twenty-eighth of June exhibited to the whole world the dreadful consequences of such tolerance.

It is clear from the statements and confessions of the criminal authors of the assassination of the twenty-eighth of June, that the murder at Sarajevo was conceived at Belgrade, that the murderers received the weapons and the bombs with which they were equipped from Serbian officers and officials who belonged to the Narodna Odbrana, and, finally, that the dispatch of the criminals and of their weapons to Bosnia was arranged and effected under the conduct of Serbian frontier authorities.

The results brought out by the inquiry no longer permit the Imperial and Royal Government to maintain the attitude of patient tolerance which it has observed for years toward those agitations which center at Belgrade and are spread thence into the territories of the Monarchy. Instead, these results impose upon the Imperial and Royal Government the obligation to put an end to those intrigues, which constitute a standing menace to the peace of the Monarchy.

In order to attain this end, the Imperial and Royal Government finds itself compelled to demand that the Serbian Government give official assurance that it will condemn the propaganda directed against Austria-Hungary, that is to say, the whole body of the efforts whose ultimate object it is to separate from the Monarchy territories that belong to it; and that it will obligate itself to suppress with all the means at its command this criminal and terroristic propaganda. In order to give these assurances a character of solemnity, the Royal Serbian Government will publish on the first page of its official organ of July 26 [1914], the following declaration:

“The Royal Serbian Government condemns the propaganda directed against Austria-Hungary, that is to say, the whole body of the efforts whose ultimate object it is to separate from the Austro- Hungarian Monarchy territories that belong to it, and it most sincerely regrets the dreadful consequences of these criminal transactions.

“The Royal Serbian Government regrets that Serbian officers and officials should have taken part in the above-mentioned propaganda and thus have endangered the friendly and neighborly relations, to the cultivation of which the Royal Government had most solemnly pledged itself by its declarations of March 31, 1909.

“The Royal Government, which disapproves and repels every idea and every attempt to interfere in the destinies of the population of whatever portion of Austria-Hungary, regards it as its duty most expressly to call attention of the officers, officials, and the whole population of the kingdom to the fact that for the future it will proceed with the utmost rigor against any persons who shall become guilty of any such activities, activities to prevent and to suppress which, the Government will bend every effort.”

This declaration shall be brought to the attention of the Royal army simultaneously by an order of the day from His Majesty the King, and by publication in the official organ of the army.

The Royal Serbian Government will furthermore pledge itself:

1. to suppress every publication which shall incite to hatred and contempt of the Monarchy, and the general tendency of which shall be directed against the territorial integrity of the latter;

2. to proceed at once to the dissolution of the Narodna Odbrana to confiscate all of its means of propaganda, and in the same manner to proceed against the other unions and associations in Serbia which occupy themselves with propaganda against Austria-Hungary; the Royal Government will take such measures as are necessary to make sure that the dissolved associations may not continue their activities under other names or in other forms;

3. to eliminate without delay from public instruction in Serbia, everything, whether connected with the teaching corps or with the methods of teaching, that serves or may serve to nourish the propaganda against Austria-Hungary;

4. to remove from the military and administrative service in general all officers and officials who have been guilty of carrying on the propaganda against Austria-Hungary, whose names the Imperial and Royal Government reserves the right to make known to the Royal Government when communicating the material evidence now in its possession;

5. to agree to the cooperation in Serbia of the organs of the Imperial and Royal Government in the suppression of the subversive movement directed against the integrity of the Monarchy;

6. to institute a judicial inquiry against every participant in the conspiracy of the twenty-eighth of June who may be found in Serbian territory; the organs of the Imperial and Royal Government delegated for this purpose will take part in the proceedings held for this purpose;

7. to undertake with all haste the arrest of Major Voislav Tankosic and of one Milan Ciganovitch, a Serbian official, who have been compromised by the results of the inquiry;

8. by efficient measures to prevent the participation of Serbian authorities in the smuggling of weapons and explosives across the frontier; to dismiss from the service and to punish severely those members of the Frontier Service at Schabats and Losnitza who assisted the authors of the crime of Sarajevo to cross the frontier;

9. to make explanations to the Imperial and Royal Government concerning the unjustifiable utterances of high Serbian functionaries in Serbia and abroad, who, without regard for their official position, have not hesitated to express themselves in a manner hostile toward Austria-Hungary since the assassination of the twenty-eighth of June;

10. to inform the Imperial and Royal Government without delay of the execution of the measures comprised in the foregoing points.

The Imperial and Royal Government awaits the reply of the Royal Government by Saturday, the twenty-fifth instant [July 25, 1914], at 6 p.m., at the latest.
A reminder of the results of the investigation about Sarajevo, to the extent they relate to the functionaries named in points 7 and 8 [above], is appended to this note.

The crime investigation undertaken at court in Sarajevo against Gavrilo Princip and his comrades on account of the assassination committed on the 28th of June this year, along with the guilt of accomplices, has up until now led to the following conclusions:

1. The plan of murdering Archduke Franz Ferdinand during his stay in Sarajevo was concocted in Belgrade by Gavrilo Princip, Nedeljko Cabrinovic, a certain Milan Ciganovic, and Trifko Grabesch with the assistance of Major Voija Takosic.

2. The six bombs and four Browning pistols along with ammunition — used as tools by the criminals — were procured and given to Princip, Cabrinovic and Grabesch in Belgrade by a certain Milan Ciganovic and Major Voija Takosic.

3. The bombs are hand grenades originating from the weapons depot of the Serbian army in Kragujevatz.

4. To guarantee the success of the assassination, Ciganovic instructed Princip, Cabrinovic and Grabesch in the use of the grenades and gave lessons on shooting Browning pistols to Princip and Grabesch in a forest next to the shooting range at Topschider.

5. To make possible Princip, Cabrinovic und Grabesch’s passage across the Bosnia-Herzegovina border and the smuggling of their weapons, an entire secretive transportation system was organized by Ciganovic. The entry of the criminals and their weapons into Bosnia and Herzegovina was carried out by the main border officials of Shabatz (Rade Popovic) and Losnitza as well as by the customs agent Budivoj Grbic of Losnitza, with the complicity of several others.

On the occasion of handing over this note, would Your Excellency please also add orally that — in the event that no unconditionally positive answer of the Royal government might be received in the meantime — after the course of the 48-hour deadline referred to in this note, as measured from the day and hour of your announcing it, you are commissioned to leave the I. and R. Embassy of Belgrade together with your personnel.