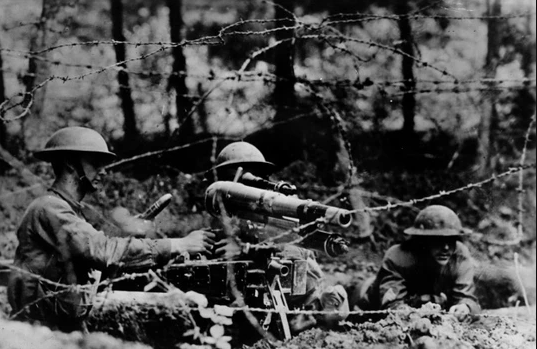 American troops arrived on the western front in 1918 full of enthusiasm, and in the spirit of great adventure. Yet most of them were novices who, unlike their German counterparts, had seen practically no action. Determined to teach them this was no game, the Germans proceeded to unleash the war’s most harmful weapons. Here are 7 facts you might not know about America’s entry into the First World War…

Naming their first major raid against American troops – with gallows humour – Einladung (an invitation), the Germans exposed American troops to the weapons of modern warfare: gas, flamethrowers, and high explosives. Their surprise attack in the Woëvre region around the village of Seicheprey, France, on 20 April, spearheaded by elite German stormtroopers and supported by aircraft, trench mortars and heavy artillery, was designed as a propaganda coup against the perceived ‘weak’ newcomers (America had formally entered the conflict with an official declaration on 6 April 1917).

In his book, retired US Air Force colonel Terrence J Finnegan uncovers the story of the combatants, the outcome of battle and how the war was portrayed by the media. Relying entirely on primary sources, ‘A Delicate Affair’ on the Western Front offers the only analysis of the United States’ entry into the First World War, and is said to be the most complete account of how the Germans planned an operation ever published (most of the data having been destroyed in the Potsdam raid of 1945). Finnegan reveals seven little-known facts about America’s entry and involvement in the First World War…

1. In 1918 the first American infantry divisions fought at a ‘quiet sector’

Quiet sectors exemplified the concept of ‘live and let live’ – a welcome respite from the ongoing horror of the western front. In 1916, the St Mihiel region became known as a ‘convalescent home’ – a quiet sector for units of both sides recovering from other battlefronts.

Until the St Mihiel offensive of September 1918, the conflict saw regimental-sized units committed against each other. One American soldier recalled: “Guns are booming all the time. This harassing fire gets our goat. And they call this a quiet sector… C’est la guerre!” (This is war!)

A quiet sector seemed the most logical first commitment for independent American forces on the western front, and the Americans arrived at the Woëvre tasked with the responsibility of defending French ground. American operations proved the area to be anything but quiet. Both the 1st ‘Fighting First’ Division and 26th ‘Yankee’ Division showed the Germans that the bow wave of American soldiers was committed to battle.2

2. When the Germans unleashed their first major raid on the Americans, they called it an ‘invitation’

The German Generalstab committed the 78 Reserve Division’s 259 Reserve Infanterie Regiment to engage the 1st ‘Fighting First’ Division under the code word Einladung (invitation) – an ironic name for the first planned German trench raid against the Americans in the Woëvre, indicating that it was now time to send an ‘invitation’ to American forces to experience first-hand the realities of positional war.

On 1 March 1918, north-east of Seicheprey and north of the Bois de Remières, Einladung commenced with a combination barrage of high-explosive and gas fire saturating American positions held by the 18th Infantry. The barrage lasted half an hour, annihilating positions, demolishing dugouts (referred to as abris in this sector), caving in trench networks and cutting off wire communications. Einladung was more noteworthy for the artillery exchange than for infantry close combat: in less than an hour the German barrage deluged four American 75mm batteries with 300 shells each.

Thanks to Einladung, the Germans better understood what faced them with the arrival of American forces. American close-in combat was assessed as being very good, with US troops using machine guns, rifle and hand grenades effectively.

Both sides declared victory. The French corps d’armée commander, Général Passaga, heaped praised on the Americans’ first major battle with these stirring words: “The Boche felt the weight and vigour of the American fist.”3

3. Americans followed the French practice of ‘sacrifice positions’ at Seicheprey

When the Germans unleashed their major Operation Michael offensive on 21 March 1918, Allied commanders took action to position battle-trained American forces north of Paris. The 1st ‘Fighting First’ Division was replaced by the 26th ‘Yankee’ Division, a US National Guard division from New England. At Seicheprey on 20 April 1918 the Germans launched an Erstürmung (taking by assault) against the 102nd Infantry positions under the code name Kirschblüte (cherry blossom). Experienced German assault troops, aided by Sturmtruppen and Pioniere (combat engineers), struck hard against American positions on the front lines.

What made the affair even more sobering was that the French practice of ‘sacrifice positions’ (meaning that troops should hold their positions at all costs, even to the death) was adhered to within the Woëvre. A procedure imposed on American military thinking by the French VIIIe Armée tactical command under Général Gérard, sacrifice positions became the basis for French operations at the front, redolent of ‘they shall not pass’ in the spirit of Verdun. It made it a matter of priority for military commanders to place soldiers at key front-line positions in order to weather both the horrendous barrages and the explosive assaults now being executed.

The Seicheprey affair deserved greater respect due to the heroism clearly demonstrated by soldiers placed in sacrifice positions. Americans showed incredible courage, in many cases fighting to the death. This was what resonated with the German commanders; they now faced a fresh enemy with purpose.

4. The ethnic diversity of the ‘Yankee’ Division worried German commanders

Equally concerning to German commanders was the phenomenon reported by General der Artillerie von Gallwitz after the war in his memoirs. He received reports from Kirschblüte that prisoners from 26th Division identified themselves by their native tongue rather than as simply American.

In the quiet sector, German planning of combined arms held Allied forces in check, but gradual attrition from fresh American combatants of equal fervour filling the lines meant that time was running out for the Germans.

5. America’s first decorated US Marine Aviator for valour in combat fought at Seicheprey

On 20 April 1918, Second Lieutenant Kenneth P Culbert flew a historic sortie at Seicheprey. Culbert had graduated from Harvard the previous summer with the prestige of being a star member of the rowing crew. Following initial training with the French as an aerial observer, Culbert transferred to 1st Aero Squadron on 1 April.

The weather on 20 April was miserable. Poor visibility combined with a hailstorm battered the Spad XI of aerial observer Lieutenant Culbert and his Spad XI pilot Lieutenant Barney Barneby as they entered the airspace over the battlefield and, in American aviation’s first entry into a combat environment, fired approximately 100 rounds into the trenches. Flying over the road to Thiaucourt they fired on German trucks.

On spotting a German artillery battery near Essey, they radioed its position and status back to the American artillery units. Their sortie was mentioned in the German official battle report. The enemy aviators flying over the trenches at a low altitude and firing machine guns, it said, “proved very annoying”.

A few weeks later, on 15 May, Culbert’s valour continued when he successfully acquired aerial photographs, despite severe damage from heavy enemy anti-aircraft and machine-gun fire. But his short yet illustrious career came to a tragic end when, a few days later, he and Lieutenant Barneby were killed by anti-artillery fire while flying their Spad XI.

Both aviators were posthumously awarded the Croix de Guerre for operating under heavy fire and in adverse weather conditions. Culbert was also awarded a Silver Star citation – the first American award for valour to a US Marine aviator – for his second act of bravery.6

6. A second generation German-American became a heroic legend to the German enemy he fought

The concept of the sacrifice position was exemplified by a lone US National Guard-enlisted man whose heroic actions were communicated up to the highest German echelons, but never recognised by the Allies.

A 30-man German Zug (patrol) intercepted the 102nd Infantry’s Company H rations and mail wagon over a stone bridge crossing the Rupt de Mad river west of Seicheprey. The acting company mess sergeant (actual rank was private) Louis R Ziegra and two other soldiers came under a hail of fire. Private Ziegra fired back, killing one of the troops with a shot to the head.

In response, German soldiers jumped on the wagon and the two soldiers fell into the back of the wagon playing dead. Then the fight began. Private Ziegra was shot at close range, the bullet entering his chin, missing the jawbone and exiting near the right nostril. Despite the blood spurting from his head, Ziegra didn’t stop pummeling the German assault troops that jumped him. One German recalled the American violently lashing out with his fists, flooring assault troops to the ground with each blow.

Several assailants had bloody noses, a few broken teeth and black eyes. Soon Ziegra was overpowered and taken as a prisoner of war. Iron Crosses for bravery in the scuffle were awarded to nine members of the assault troop.

Ironically, Private Ziegra, a second-generation German-American, became a legend among the Germans. One American officer prisoner of war returned after the conflict and related that the Germans considered Private Ziegra to be one of the bravest men they had ever seen. Amazingly, the ultimate testimony from the German enemy came from the army commander who faced American forces for most of the war: General der Artillerie von Gallwitz. He cited Ziegra’s courage and fighting spirit in his post-war memoirs: “An American of the 26th Division, captured at the southern front by Xivray, had defended himself mightily and refused all testimony.”

Sadly, whether due to his period of absence as a prisoner of war or because he was a German-American, Private Ziegra never received recognition for his valour that night.7

Memories of Seicheprey affected many combatants on the western front. French poilus (the equivalent of the English Tommies) nicknamed Seicheprey ‘Little Verdun’. In its operations logbook, the counterpart French regiment to the 102nd Infantry cited the horrendous barrage that deluged American positions on 20 April 1918 as a catastrophic event.

American losses reported from the Seicheprey affair gave the British the impression that “the Americans were not going to do much”. One American soldier countered: “They had lost heavily but they had made the Germans pay a dearer price.”

A German Seicheprey veteran, Paul Ettighoffer, reflected on the battle that had just concluded: ‘Erdrücken werden heute vielleicht noch nicht, aber morgen.’ (‘Today [we] might not be crushed, but tomorrow.’)

Terrence J Finnegan is a retired US Air Force Colonel and senior civil servant whose career spans four decades of military service. His career as a military intelligence professional covered analysis, production and planning within the US Department of Defense. Finnegan is the author of ‘A Delicate Affair’ on the Western Front: America Learns How to Fight a Modern War in the Woëvre Trenches (Spellmount, 2015). He is also the author of Shooting the Front: Allied Aerial Reconnaissance of the First World War (Spellmount, 2011).