A Christmas miracle: When gunfire was replaced by joy 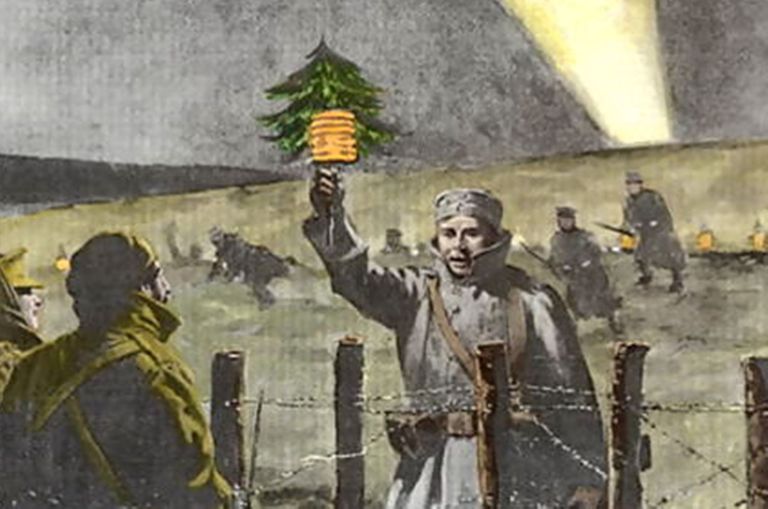 The Great War began in July 1914, and a few months later the soldiers would spend the first Christmas away from their loved ones in the heat of battle. On the Western Front, however, a miracle happened: the two sides decided to forget the war and celebrate. About 100.000 German, French and British soldiers spent Christmas together.

“Then we placed even more candles than before along our one-kilometre long trench, as well as Christmas trees. The British expressed their joy by applause. Like most people, I spent the whole night awake. It was a wonderful but somewhat cold night,” said German Lieutenant Kurt Zemisch.

The press of the time wrote that the soldiers agreed to observe this important Christian holiday. Beside the fact that they ceased fire, the soldiers from both sides met in no man’s land and congratulated each other. Moreover, they also prepared gifts like food, alcoholic beverages and cigarettes. Such meetings also took place on the Eastern Front between the Austrian and Russian soldiers. “I think I was witness to one of the most extraordinary sights a man could see. We were going to open fire when we saw that they had no rifle, so one of our men came out to meet them and in about two minutes the ground between the two trench lines swarmed with men and officers, wishing each other happily a happy Christmas”, wrote British lieutenant Dougan Chater.

“What a sight, groups of Germans and Britons along the entire length of the front”

The soldiers sang together, rejoiced and drank around the fire. They even played a couple of football games. Their superiors resisted these actions because they were afraid that in the future this would affect the frontline activities of the men under their command. The soldiers tried to repeat this temporary peace during Easter and Christmas 1915, but on both occasions, it didn’t have the same scale. In 1916, no such fraternization took place on Christmas.

“What a sight, groups of Germans and Britons along the entire length of the front. From the darkness we could hear laughter or see matches, a German lighting a Scottish cigarette and vice versa, exchanging them or other souvenirs. When they could not speak the tongue, they made themselves understood by using signs, and everyone seemed to be doing well”, said Corporal John Ferguson in a letter to his family. The Christmas armistice lasted until the New Year. These events were attended not only by soldiers but also by officers. Although the superiors ordered them to resume the attacks, such calls were ignored.

“A very special thing happened. Some Germans came out with their hands up and started to take some of their wounded, so we came out of our trenches and we also started to take our wounded. The Germans then made us a sign and some of us turned to them and talked with them, they even helped us in burying our dead. This lasted all of the morning and I spoke with several of them and I must say they were formidable people”, lieutenant Geoffrey Heinekey recalled.

The armistice ended before the New Year, when Captain James Dunn fired three shots into the air, and the Germans responded with two shots. Many soldiers were then threatened to be executed because they refused to return to their trenches. Eventually, the fighting was resumed between the two sides, the Great War ending at last in 1918.