America joins the war: Wilson’s speech to Congress and the Zimmermann telegram 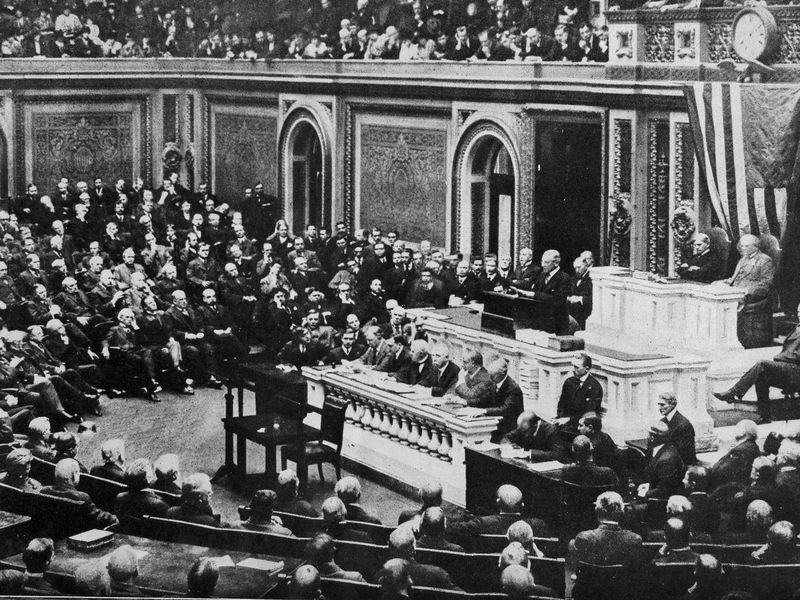 On April 2nd1917, Woodrow Wilson addressed the American Congress, asking for a declaration of war on Germany. ”The world must be made safe for democracy.” Four days later, the American congressmen voted for their country’s involvement in the European war.

The New York Times would write that the “United States virtually made its entrance into the war” with Wilson’s speech. “Before an audience that cheered him as he has never been cheered in the Capitol in his life, the President cast in the lot of American unreservedly with the Allies and declared for a war that must not end until the issue between autocracy and democracy has been fought out.”

And this was a declaration coming from a president who had won his second term in office in 1916 by promoting the idea of neutrality. Wilson’s presidential campaign was based on the idea that, until then, he had managed to keep the US far from the European war. However, Wilson wasn’t willing to maintain neutrality if the Central Powers became too dangerous for the American safety and national interests. In September 1916, in a speech delivered when he was nominated as the Democrat presidential candidate, Wilson issued a warning to Germany that its submarine attacks that killed American citizens would not be left unpunished.

“The Germans have started a war against mankind”

In his speech to Congress, talking about the Germans’ decision to instate a total submarine warfare, Wilson declared that:

“I was for a little while unable to believe that such things would in fact be done by any government that had hitherto subscribed to the humane practices of civilized nations. International law had its origin in the attempt to set up some law which would be respected and observed upon the seas, where no nation had right of dominion and where lay the free highways of the world. By painful stage after stage has that law been built up, with meager enough results, indeed, after all was accomplished that could be accomplished, but always with a clear view, at least, of what the heart and conscience of mankind demanded. This minimum of right the German Government has swept aside under the plea of retaliation and necessity and because it had no weapons which it could use at sea except these which it is impossible to employ as it is employing them without throwing to the winds all scruples of humanity or of respect for the understandings that were supposed to underlie the intercourse of the world. I am not now thinking of the loss of property involved, immense and serious as that is, but only of the wanton and wholesale destruction of the lives of noncombatants, men, women, and children, engaged in pursuits which have always, even in the darkest periods of modern history, been deemed innocent and legitimate. Property can be paid for; the lives of peaceful and innocent people cannot be. The present German submarine warfare against commerce is a warfare against mankind.”

“With a profound sense of the solemn and even tragical character of the step I am taking and of the grave responsibilities which it involves, but in unhesitating obedience to what I deem my constitutional duty, I advise that the Congress declare the recent course of the Imperial German Government to be in fact nothing less than war against the Government and people of the United States; that it formally accept the status of belligerent which has thus been thrust upon it, and that it take immediate steps not only to put the country in a more thorough state of defense but also to exert all its power and employ all its resources to bring the Government of the German Empire to terms and end the war.”

Ever since the war had started in the summer of 1914, the United States had tried to keep away from Europe’s conflicts. In a speech delivered in August 1914, Wilson talked about the American neutrality, stating that “The United States must be neutral in fact, as well as in name, during these days that are to try men’s souls. We must be impartial in thought, as well as action, must put a curb upon our sentiments, as well as upon every transaction that might be construed as a preference of one party to the struggle before another.”

While most Americans were in favor of neutrality, businessmen and manufacturers were linked to the belligerent states through commercial relations, selling ammunition and food supplies. As such, the American neutrality wasn’t actually an impartial one, as it favored the Entante.

The public opinion changed in the following years, as the US gradually became more involved in the war. The Germans’ submarine attacks were the final drop. In 1915, a German sub sank the Lusitania, a British ship carrying American citizens. 128 Americans died that day. At the time, Wilson threatened to take measures against Germany, so the government in Berlin agreed to not attack commercial ships. However, in January 1917, the Germans announced a policy of unrestricted submarine warfare. Wilson’s next step was to immediately break all diplomatic relations with Berlin.

The American decision was heavily influenced by the Zimmermann telegram, a note sent by the German Foreign Minister, Arthur Zimmermann, to the Mexican ambassador, promising to aid Mexico in its claim of American territories in exchange for support in the war. The telegram was intercepted by the British and sent to Washington on February 24th 1917.

“We intend to begin on the first of February unrestricted submarine warfare. We shall endeavor in spite of this to keep the United States of America neutral. In the event of this not succeeding, we make Mexico a proposal of alliance on the following basis:make war together, make peace together, generous financial support and an understanding on our part that Mexico is to reconquer the lost territory in Texas, New Mexico, and Arizona. The settlement in detail is left to you. You will inform the President of the above most secretly as soon as the outbreak of war with the United States of America is certain and add the suggestion that he should, on his own initiative, invite Japan to immediate adherence and at the same time mediate between Japan and ourselves. Please call the President’s attention to the fact that the ruthless employment of our submarines now offers the prospect of compelling England in a few months to make peace.”

Mexico declined the German proposal, arguing that it was ill prepared for a military confrontation with a much stronger America, and that the promises for “generous financial support” were meaningless, as the Germans were send military supplies through a British-controlled Atlantic.

The telegram was intercepted by the British in January, but they didn’t send it to Washington right away. Why? First of all, to protect its intelligence agency (the Germans didn’t know their note to Mexico had reached London) and, second of all, to wait for the opportune moment in which anti-German sentiments in the US reached a critical point.