An (other) failure: The revolt of July 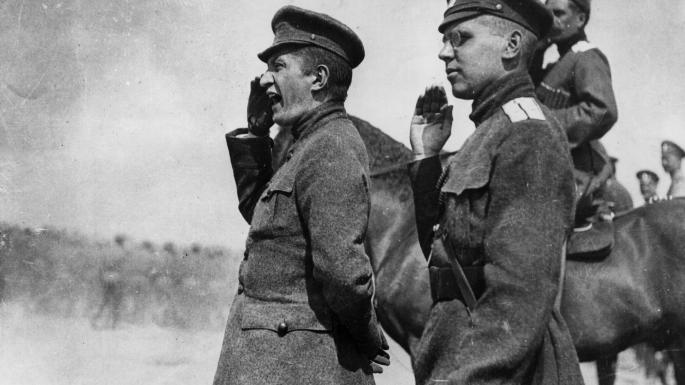 Not even half of year had passed since tsarism had been overthrown- and, as always, history repeated itself: the new leadership in Petrograd failed to keep its promises, and the populace believed that everything would be resolved, yet again, in the street. But what started then was a revolt without a political foundation, without a leader and without a manifesto- and the Russians slid into an ever-deeper crisis. When the demonstrations of the July Days were over, the people only got hasty resignations and unexpected disappearances.

The big problem of the Great War

It was almost three years since Russia had entered the war against Germany- bringing only suffering, misery and decay. In February 1917, the Russian people found their culprit: Tsar Nicholas II. When he was removed from power, the leadership of the country fell on the bourgeois intelligentsia and on the elected representatives of the people, assembled in the State Duma and the Petrograd Soviet. This first provisional government was led by Prince Lvov, a moderate monarchist, who surrounded itself with popular people, including Alexander Kerensky, the Minister of War. For them, international relations were a priority and decided that Russia should continue the war and respect their commitments to the Allies. Kerensky, along with General Brusilov, seemed to be able to rouse the demoralised soldiers. Their apparent patriotism gave the two the illusion of victory. But once in a while they were brought down to earth by the simple and direct questions of ordinary soldiers: “You say we have to fight the Germans so that the peasants can have land. But what good will it do to us, peasants, to get the land, if I’m killed and get nothing?”

Russia was poor- the soldiers lacked food, equipment and courage. More and more often, those left to fight found themselves attracted by Bolshevik slogans. This “trench bolshevism”, as it was called, has resulted in numerous desertions before the great offensive against Germany, prepared by Kerensky and Brusilov. The Petrograd Soviet presented the alternative of peace and the soldiers were asking themselves: “Why should we conquer a hilltop when we can make peace at his feet?”. There were riots in garrisons and units. The soldiers refused to fight, some saying they would not do it unless Lenin asked them to. On June 16, 1917, the last Russian offensive of the war took place, an act that plunged the country into chaos and collapsing the faith in the Provisional Government. Prince Lvov acknowledged his own incompetence: “I feel like a piece of driftwood taken ashore by revolutionary waves”. Besides the internal problems, the failure of the offensive also threatened the ruling coalition, and the wind of the revolution was again blowing through the Tauride Palace.

In Petrograd, the people were starting to get agitated when they began to suspect the government of being “counterrevolutionary”. Because the February Revolution had been a revolution of both workers and soldiers, one of the conditions that the Soviet made when the dual governance was established was that the soldiers, about 250.000 of them, would remain in place in Petrograd if the monarchy or other power would try a counterrevolution. But the Duma’s leaders felt that the security of the government was threatened by the garrison in the capital- so on June 20, they decided that 500 machine-gunners should be sent to help on the front.

The Bolshevik military committees saw in this a reason to start a new revolution, to take down the Provisional Government and put themselves into power. But Lenin disagreed. It wanted a majority in the Soviet, not a revolution that could have led to a civil war and automatically to the decline of Bolshevism.

The debates did not last long. Some Bolsheviks and anarchists believed in a spontaneous revolution. The first to be convinced were the 500 soldiers, in honour of whom a show was organized on July 3, before their departure. The event turned into a protest that brought back the February slogan: “All power to the Soviets!”. In the afternoon, with the end of the working hours, the streets began to be filled with workers. It seemed that the revolutionary spirit of February would once again make its presence known. The place was the same, only the landscape was changed. Ordinary people traded in their overalls for bullets in their pockets and ammo belts hung about their necks. They set off on the Nevsky Prospekt Boulevard, at the end of which was the Tauride Palace. They tried to organize themselves, they needed a leader as the crowd was in disarray and the risk of a civil war loomed. Rumours were circulating that the Provisional Government had been removed, that a special commission was being formed to organize the protests. In the evening, people ran out of patience and seeing that nothing was being done went back to their homes.

Bolshevik hesitation and the failure of the revolt

July 4 was to be the decisive day in the Bolshevik camp. The Central Committee had reunited to decide whether this was the right moment to take power. The soldiers and workers already occupied the streets of Petrograd, and other Bolsheviks would join them. But the key role of the revolt would be played be the Kronstadt fleet, with more than 20,000 armed sailors, led by Raskolnikov. “Everywhere you could see sailors with ladies in revealing clothes and wearing high-heeled shoes”, this is how the sailors were greeted when they arrived in Petrograd.

It was the second day of revolt- people were gathering, but incredibly the Bolsheviks had not yet decided what position to adopt. They were not sure whether this was the right time for the Provisional Government to be replaced by the Bolshevik Central Committee, or to just to use the opportunity to put pressure on the Petrograd Soviet. Lenin had been brought back in a hurry in the hope that he would decide. Everyone was relying on him, especially since in June at the All-Russian Congress of Soviets, the Menshevik leader, a member of the Provisional Government, Tsereteli, had said: “There is no political party that can tell the provisional government: «Give us the power and leave- we will take your place! » Such a party does not exist in Russia”, Lenin had risen and, confidently, said: “Est takaia partia!”- “There is such a party!” It seems, however, that Lenin’s indecision during the revolt was in the end a blow to the Bolshevik image. Eager and ambiguous, he held an incoherent speech to the gathered crowd- the last, indeed, before October 1917.

“Is this the revolutionary army of a free people?”

They wanted a revolution, but the revolutionaries did not have a leader. So, the street tried to organize itself. In front of the Tauride Palace there were already a lot of people: over 20,000 people, and with the arrival of the sailors, the Nevski Prospekt boulevard was filled. But no one knew what to do once they got into the street.

The Provisional Government was only defended by 18 soldiers of the Pavlovsky Regiment and a few dozen Cossacks- too little to cope with a possible assault by the crowd. The Tauride Palace was empty: The Duma members had fled or had hidden in the General Staff. But the soldiers and the Cossacks, even though few in number, were enough to fill the main thoroughfare of the capital with over 700 bodies in a few minutes. They had to shoot at random- the government had to be somehow defended.

What the revolutionaries expected was a sign from the Bolshevik leaders, from Lenin, but none came. Irritated, and because of the rain that had swept over Petrograd, several sailors broke into the palace and arrested minister Chernov. They wanted to give all the power to the Soviets, as they always called for, but the Soviets did not want to be given that power. That’s why they held Chernov hostage. Meanwhile, Trotsky intervened and asked the sailors to release the politician. The last part of the day saw the unfolding of the revolt like something out of an amateur stage theatre.

In the evening, when many people had already resigned to the thought that the coup had failed, the 176th Regiment of Krasnoye Selo arrived in the capital. They were coming to take part in this great historic event, but there was nothing to see in Petrograd. The evening ended when a group of workers entered the Tauride Palace to ask the members of the Soviet for explanations. They did not receive any, instead they were the first to be given an order stating that protesters had to return to their homes, otherwise they would be arrested as traitors of the revolution. And as a last symbolic scene, the sailors from Kronstadt occupied the deserted fortress “Peter and Paul”, sleeping in empty cells, haunted by the Tsarist past.

The Prime Minister, Prince Lvov, had enough. He felt that his policies didn’t not work, and the fact that the idea of ​​a Soviet government had failed under his leadership was unforgivable. Regarding the war, Russia was in the same place: it had no soldiers, no equipment, no food. Even the people in the countryside were struggling. The political scene was in shambles, because after the July Days everyone was more concerned with denigrating the Bolsheviks. So, the prince thought it was time to leave the country’s helm in the hands of a capable politician and, to a great extent, liked by the people: Alexander Kerensky. “The only way to save the country now is to dismantle the Soviet and shoot the people. I cannot do this. But Kerensky may”, the prince confessed before resigning.

The July Days were a step by step replay of the February Revolution, but also a warning for what was about to come. Why did this revolt fail? Because of the indecision of a leader in whom everyone had put their trust. The revolt changed a government, but there was no real headway. The Petrograd Soviet lost a great deal of credibility, the Bolsheviks were in hiding and the demonstrations seemed to end, but the coming of autumn would change everything.