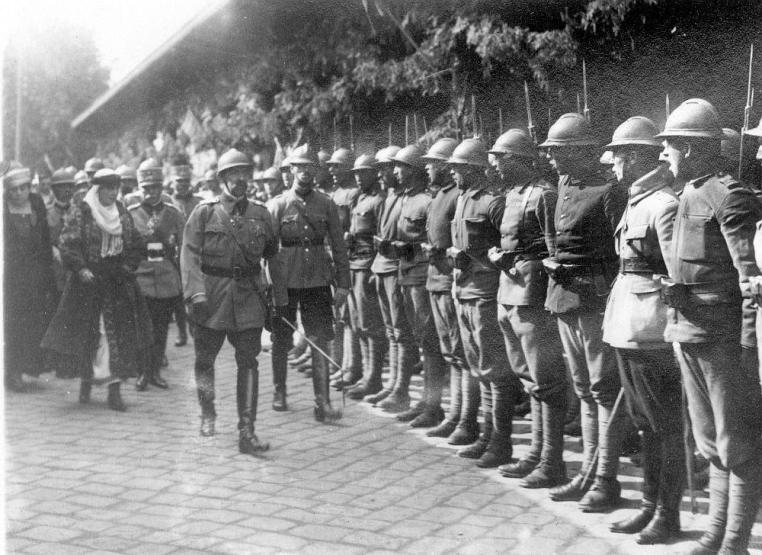 On August 17, 1916, the Romanian Prime Minister, Ionel Brătianu, signs with the representatives of the four powers of the Entente, the treaty by which Romania joins the Allies and enters the First World War. Brătianu negotiated between 1914 and 1916 the best conditions for the country’s entry into war. Regarding the territories, Romania requested provinces from Austro-Hungary that were inhabited by Romanians: Banat, Crişana, Maramureş, Bukovina and Transylvania. Under the military convention signed on August 17, 1916, Romania had to enter the war by August 28.

Immediately after the signing of the Treaty, the Crown Council of Romania was scheduled on the morning of August 27 to inform the political and institutional leaders regarding the treaty. On the same day, Romania would make the mobilization public, which already was in its preliminary stages.

The purpose of the Crown Council was different from the one of August 3, 1914. Then, King Carol I asked the council for advice if Romania should enter the war and the vast majority of members were in favour of neutrality, a decision that was respected by Carol. This time, King Ferdinand needed support because the decision was already taken. The Council began with the King outlining the situation: “I have summoned the country’s greatest men here, not to ask for advice, but to ask for their support. I see that the situation is in such a way that we can no longer remain neutral; the victory of the Central Powers from this moment on is excluded; my government, who also believes the time has come for us to enter the war, has had a meeting with one of the belligerent governments.” Finally, Ferdinand explained the internal conflict he was in, between his German origin and his duty as the King of Romanians. The King asked all those present to support the decision of Romania entering the war on the side of the Entente to fulfil its national ideal.

Then there was a long presentation made by the Prime Minister, Ionel Brătianu, of the conditions of the alliance and of the reason to enter into war. “In a whirlpool like the one of the current war, in which the map of the world is transformed, a country like ours cannot remain neutral until the end. It is necessary to forsake neutrality, with the ideal of national unity in mind, for who knows if over the centuries we will find another opportunity as favourable as the one of today.” Brătianu was supported by the majority of those present in the Council, who mostly were liberal and conservative-democrats. However, the conservatives opposed this decision. Alexandru Marghiloman, Titu Maiorescu and especially Petre P. Carp were against it. If the first two were still in favour of neutrality, Carp argued that Romania should join the Central Powers. As a final argument, Petre P. Carp told the King, “Sire, the Hohenzollerns cannot be defeated”. The king promptly replied, “You are wrong, Mr. Carp, I have already defeated one”, referring to himself.

Brătianu: “Even defeated, I still believe that my country must, at this moment, make this gesture”

Towards the end of the debates, Brătianu, according to I.G. Duca’s notes, told that: “no doubt we will be victorious, but I’m not sure, we can still be defeated. That’s why I want everyone to know, that even defeated, I still believe that my country must, at this moment, make this gesture. In the lives of nations there are affirmations of rights that are worth more than fleeting victories or gestures of abdication, of moral desertion that compromise their future for centuries. In such a situation Romania finds itself today… and if not today, then tomorrow we will reap the fruits of these sacrifices and of these assertions of rights… remember: Tudor Vladimirescu was crushed and the rulers of the day slaughtered him. But he raised the flag of our national rebirth, and on the basis of his gesture his descendants have done it… the most characteristic case is Michael the Brave. He too was defeated, he too was killed, but he had known for a moment to embody the age-old dream of the people, the union of all the Romanians. And it was enough, not only for him to remain a legendary and glorious hero throughout the ages, but also for us today to base the claims of this nation on his deeds.”

On the same day, at nine o’clock in the evening, the Romanian ambassador to Vienna, Edgar Mavrocordat, handed the war declaration to the Austro-Hungarian Foreign Minister Burian Istvan. Romania entered the First World War. On August 28, Germany declared war on Romania, followed by the Ottoman Empire on 30 August and Bulgaria on 31 August.