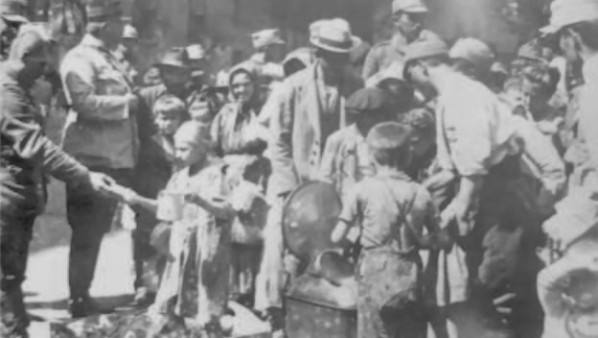 Hungary’s domestic policy was left to Hungarian politicians, giving them wide autonomy, although they were still under occupation. They took advantage of this freedom and sought to discredit the Romanians, blaming them for all the ills of the country.

Undoubtedly, there were cases of violence and abuse, but it was by no means generalized, as Hungarian politicians claimed.Outside Hungary a network of anti-Romanian propaganda was set up, fuelled by influential aristocrats and politicians.Because of this, British and US media in particular, launched virulent attacks against Romanian authorities. In many occasions, news correspondents and representatives of the Great Powers arriving in Budapest were received only by Hungarian envoys and quickly became victims of misinformation.

Such was the case when members of the US  Inter-Allied Military Mission to Budapest falsely reported that children were dying in maternities due to lack of milk, blaming requisitions made by Romanian troops. The news spread like wildfire around the continent, and even though an Allied committee later proved that everything was caused by an epidemic at Budapest’s largest dairy, the damage to Romania’s reputation was already done.

There were also reports that the Bolshevik prisoners of war were detained in miserable conditions, that Romanian authorities refused to provide them with the basic necessities of life, like beds and medicine.However, there was no mention of the fact that they were difficult to obtain even in Bucharest, as a consequence of German and Austro-Hungarian requisitioning following the Treaty of Bucharest in 1918.

Veterinary captain Diossy Aladar, claimed that 1.000 mares from the Mezoheghies stud were given to the Italians by the Bolsheviks in exchange for weapons and munitions.However, this did not prevent Hungarian authorities to state that, in fact, the mares were taken by the Romanians.Romanians were also blamed for robbing hospitals leaving patients without food or medicine.The incriminations were aroused by the attempts of the Romanian troops to retrieve certain goods and the sanitary utensils plundered from Romania during the occupation of the Central Powers which were now in Hungary.Moreover, following the vehement protests of the Hungarian government and the  Inter-Allied Military Mission, Romanian authorities were prevented from recovering their own assets.

In the Buda Castle, archives stolen from the library of the Romanian Academy, but also a hundred boxes with different objects from Transylvanian museums were also found, which rightfully belonged to Romania.General Bandholtz, the US delegate to the  Inter-Allied Military Mission in Budapest, stopped the Romanians from taking back some of their historical patrimony.This incident served in the creation of an anecdotal story, in which it is said that Bandholtz whipped with his riding crop not only some Romanian soldiers, but even the general in charge, Serbescu.Years later, a statue of General Bandholtz was erected in front of the United States Embassy in Budapest, in gratitude for the services he provided.

However, when it came to rolling stock, the situation became especially sensitive. From Hungary, by the end of the occupation, over 1.000 locomotives, 2.000 passenger cars, and 37.000 freight wagons had been taken, besides the equipment, machinery, and other war spoils.The cost to the Hungarian state was calculated somewhere around 29 billion Austro-Hungarian crowns [13 billion euros], a truly colossal figure.However, it was not near enough to the 15 billion francs [19 billion euros] that Romania had to pay as a consequence of its occupation by the Central Powers.

There was little confidence in the reparation system being developed by the Allies, especially after they refused to acknowledge Romania not only its status as cobelligerent power with equal rights, but also the rest of the clauses of the Treaty of Bucharest signed in 1916.In this situation Romania wanted to cover the damage done by the Austro-Hungarian and German occupation, having no guarantee that the Entente will compensate the country for all these losses.

Before the start of the First World War, Romania had 900 locomotives, 1800 passenger cars and 24.000 freight cars, and after the departure of the Germans and Austro-Hungarians there were only 300 locomotives and 8.000 freight cars. Not to mention the nearly two hundred railway bridges  which were blown up or the extensive damage done to railway infrastructure.

However, on the issue of requisitions Hungary garnered much more attention than Romania, and did not benefit from the same vocal sympathies.

It was no wonder that Romania’s relation with the Allies soured, especially when the issue of increasing the number of police officers in Budapest was raised.The Hungarian government insisted on the creation of an additional police force in the capital, besides the existing one, consisting of 6.000 people armed with rifles and bayonets, a request considered by General Holban more than exaggerated, especially since there were plans to reform the Hungarian army by creating two infantry divisions and one cavalry division.

Eventually, a compromise was reached, the Romanian general’s proposal being adopted for only 4.000 people armed with only a sword and a pistol, angering General Bandholtz.However, a force like the one demanded by the government would have represented a far too great a threat, and could be used against the Romanian troops. These suspicions were confirmed in early September 1919, when a military conspiracy became apparent.Major Politowsky was arrested, being in possession of documents that outlined the way in which an armed insurrection would take place. A warehouse containing hundreds of weapons is also discovered with this occasion.

A few days later General Letay was arrested and identified as the head of the entire organization. It was discovered that they were already recruiting in Budapest for a major action against the Romanian army.