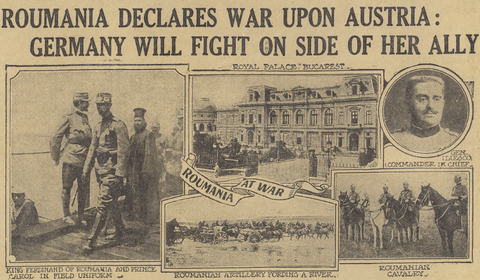 For two years, between 1914 and 1916, Romania proclaimed its neutrality. Under these conditions, both the Entente and the Central Powers made special efforts to bring Romania to their side, by promising territories inhabited by Romanians. If the Entente enticed Romania with Transylvania, Banat, Maramureș and Bukovina (all of them a part of Austria-Hungary), the Central Powers tempted Romania with the promise of Bessarabia. In fact, the Austro-Hungarian ambassador to Bucharest, Count Ottokar Czernin, reiterated at each meeting with the Romanian Prime Minister, Ionel Brătianu, the fact that Romania should be focusing on Bessarabia.

Exasperated by the growing insistence of the Austro-Hungarian ambassador, Romanian Prime Minister Ionel Brătianu decided to answer in kind. We can find the details of their conversations in a secret telegram sent by Ottokar Czernin to Austro-Hungarian Foreign Minister Stephan Burián von Rajecz.

The content of Mr. Brătianu’s statements is the old and far too well-known profession of governmental creed: to stay in neutrality as much as possible, and when one of the camps is collapsing, go against it at the last minute. For me the novelty was the shameless sincerity with which Mr. Brătianu spoke and with which he- the ally- made it clear that Romania would go against us if we were to be defeated. Of course, in his long speech, the President of the Council spoke largely against Russia and repeatedly stressed that the control of Bessarabia- sans l’ecrasement de la Russie– has no value for Romania. Then came another element that was not new, but no less interesting and not actually spoken, but only hinted at. The President of the Council has made it clear that the destruction of our monarchy is possible, while the destruction of Russia is excluded, and for this reason the lasting rule of Transylvania is viable, while that of Bessarabia is not.

It goes without saying that I’ve had much to reproach to Mr. Brătianu’s statements. I mention my answer only in passing because it is of little interest. I fought the views of the President from the point of view of morality and reason. I emphasized that there is an alliance, plus the consequences that come from here, and I let Mr. Brătianu understand that this is an irreducible contradiction between our conceptions. Then I explained to him that a war without winners and losers is excluded, and our defeat is excluded, and the possibility of working with us after the final victory is a utopia.

The interesting element that completes the discussion with Mr. Brătianu is the statement of the King made to my Bulgarian colleague and I honestly admit that it is not clear to me why these beautiful confessions, sprung from the very depths of the heart, are pouring out just now, unexpectedly, on us. Probably the basis of Romania’s allusions of going up against us is the desire to get territorial concessions, in order to remain neutral. If that was the intention of Mr. Brătianu with all those long explanations, then the ice-cold silence with which I listened to his litany prevented him from making any allusion to this conclusion, let alone mention it. Imperial and Royal Plenipotentiary: Czernin”.