Between the Entente and Germany: Romania during the period of neutrality in the First World War 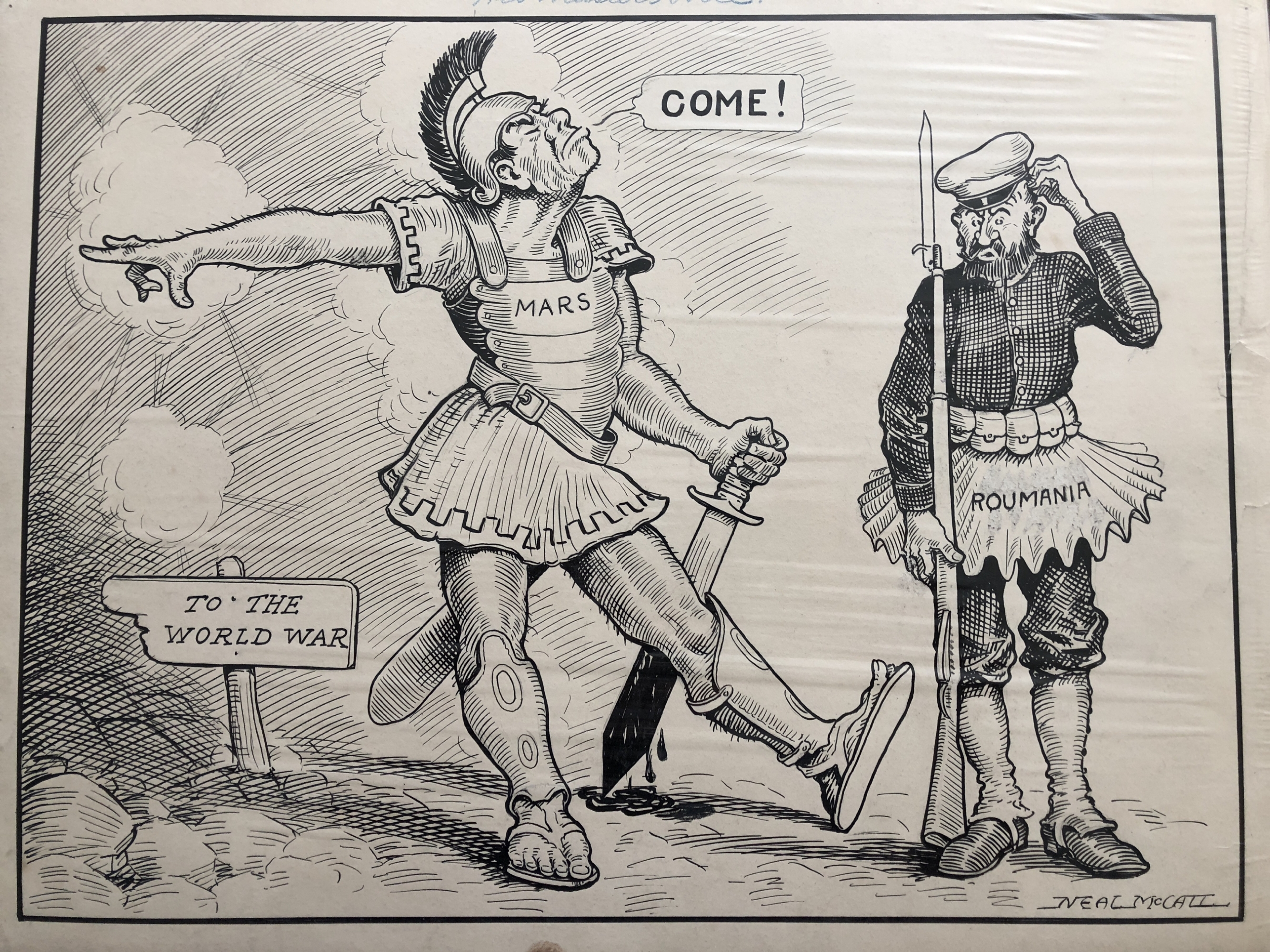 The outbreak of the First World War produced a split among the Romanian political and cultural elite around the issue of which side to join in the conflict. The Ententophiles and the Germanophiles tried to sway public opinion and thus gain the upper hand in a political confrontation that had large scale ramifications for the future of the country.

The decision to enter the war on the side of the Entente was not taken unanimously, as many of the political and cultural leaders were opposed to it. Either out of fear for Russia or from the firm belief that the Entente could not win the war, they considered that Romania would have more to gain if they joined Germany. Important figures of Romanian culture and political leaders were Germanophiles: Grigore Antipa, Tudor Arghezi, Victor Babeş, Mateiu Caragiale, Petre P. Carp, George Coşbuc, Gala Galaction, Constantin Giurescu, Dimitrie Guşti, Garabet Ibrăileanu, Alexandru Macedonski, Titu Maiorescu, Dimitrie Onciul, Vasile Pârvan, Constantin Rădulescu-Motru, Liviu Rebreanu, Mihail Sadoveanu, Ioan Slavici, Constantin Stere, Nicolae Tonitza, George Topârceanu, Duiliu Zamfirescu.

Even though anti-Hungarian sentiment became more and more pronounced among public opinion, the pro-German movement intensified their activities. On July 31, 1914, Ioan Slavici set up the “Ziua” publication, as a propaganda tool in favour of the Triple Alliance. Though the newspaper tried to portray itself as objective, from the very first issues it published news from German sources that exaggerated their victories against the French and Belgians and criticized the “atrocities” committed by “enemy” soldiers, referring to the French and the Russian troops that were fighting against the Central Powers. Regarding the Romanians in Transylvania, the newspaper even claimed that their situation was as good as those in Romania.

The division of the Romanian conservatives

The Germanophile movement already had their objectives outlined in August 1914, while the Ententophiles were just now deciding on a plan of action. The Germanophiles urged openly to enter the war, while the Entente supporters were trying to maintain neutrality. While the ruling National Liberal Party, under the leadership of Ion I.C. Brătianu, acted unitarily, according to his directives, a split took place in the Conservative Party.

Many important members desired Romania’s entry into war on the side of the Central Powers. In the beginning, Marghiloman hesitated to listen to the urgings of the Germanophiles, but as other conservatives pronounced themselves in favour of the Entente, he had to act against them.

Conservative leaders such as Nicolae Filipescu, Ion Lahovary, Ion Grădişteanu and Barbu Ştefănescu Delavrancea supported Romania’s entry into war on the side of the Entente, even criticizing the liberal government for maintaining neutrality.

The Germanophiles had set up several propaganda newspapers to support the alliance with the Central Powers. Besides Slavici’s “Ziua”, in November 1914 the “Steagul” appeared, and the following year P. P. Carp set up his own publication called “Moldova”. In the first issue, he claimed that the greatest danger to Romania was not Austria-Hungary, but the loss of the mouths of the Danube: “If we take Transylvania and we lose the mouths of the Danube, we are lost and Transylvania with us.” He considered that the problem of the Transylvanian Romanians would be solved by future generations “easily and without conflict with the Austro-Hungarian Empire.

Deeply dissatisfied with the rise of pro-Entente feelings not only among public opinion but also in his own party, Alexandru Marghiloman declared that Romania had to remain neutral, because in this situation he had nothing to lose. Marghiloman said that the situation of Romanians in Transylvania was good and believed that they would receive important concessions from the Austro-Hungarian government. The tensions between the conservatives led to the split of the party on ideological lines in the autumn of 1914.

Caught between the two camps of the Conservative Party, Marghiloman was now being challenged in an ever-increasing manner. To counteract those who criticize him, the head of the conservatives summoned the Party’s Executive Committee to cast a vote of confidence. The motion was voted with 32 votes in favour and 26 against.

Immediately after this, 22 senators and conservative deputies sent a letter to Marghiloman asking him to resign “to facilitate through the sacrifice of his person, the restoration of (…) the unity of vision and action” in the party.

Conservative members of Parliament that were opposed to Marghiloman gathered on April 26 and voted for a motion to disassociate from the party’s president in order to promote a policy favourable to the Entente. They carefully followed Italy’s intention to declare war on Austria-Hungary, and they tried to make the liberal government follow the same path.

In this context, the Germans and the ambassadors of the Central Powers in Bucharest had also started to act in order to prevent Romania from entering the war. The German ambassador visited Maiorescu to ask him to ensure that King Ferdinand will preserve Romania’s neutrality.

In May 1915, the Conservative Party divided. The group led by Nicolae Filipescu left the political party and merged with the Conservative-Democratic Party, led by Take Ionescu, who broke away from the conservatives in 1908. Under the influence of this event, Titu Maiorescu remembers in his diary that he went to the king to remind him that the treaty of alliance with the Central Powers “forces us not to deal with the enemies of Austria”. Ferdinand did not respond to this observation.

“A neutrality in all respects favourable to the Central Powers”

Among the Germanophiles, Marghiloman and Maiorescu tried to maintain a balanced attitude and pronounced themselves publicly for neutrality. In fact, the latter repeatedly rejected his colleagues’ suggestions to take over as the head of a conservative government. Maiorescu justified this attitude by his care towards “the safety of the throne”: “The new king can hardly go against the sentiments, even misplaced ones, of most of the country’s political class.”

Conscious that Romania cannot enter the war on the side of the Central Powers, against the overwhelming will of the public opinion, Maiorescu cautiously pleaded for neutrality. On August 26, 1916, Maiorescu was summoned to the king. His Germanophiles supporters and the ambassadors of the Central Powers in Bucharest were pushing him to accept the responsibility of forming a new government.

When he arrived in front of Ferdinand, Maiorescu was surprised to see that he was not called because of this, but to be informed that the king had decided to enter the war on the side of the Entente. Gheorghe Dabija reports that Maiorescu replied in a bewildered manner: “I draw your Majesty’s attention to the dire consequences that this decision might have. I do not think that as a Hohenzollern your Majesty should have committed this act of disloyalty.”

Irritated, Ferdinand replied that he had put his nationality in second place. Maiorescu told the king that he was wrong: “We Romanians must first be Romanians. Your Majesty mustn’t be. That is why we have called a foreign dynasty in the country, not because they were no candidates here, but because we needed a German dynasty.”

But the king did not want to hear any more of the conservative leader’s arguments: “He looked into Maiorescu’s eyes, stretched out his hand and said, «My judgment is final»”.

Immediately after the audience, Maiorescu told Marghiloman that “everything is lost. The king deceived them all. He makes a glory out of the sacrifice of breaking his word and out of forgetting that he is German.”

The Germanophiles were amazed at the king’s decision. Ferdinand was their only hope, but he turned his back on his German origin and chose to ally himself with the enemies of his country of origin. The next day, the King convened the Crown Council at the Cotroceni Palace, where he decided that Romania will go to war against the Central Powers, starting on August 28, 1916.