Bucharest, December 1, 1918: “It was only for a moment. But it’s enough to live this moment once to fill an entire life with it” 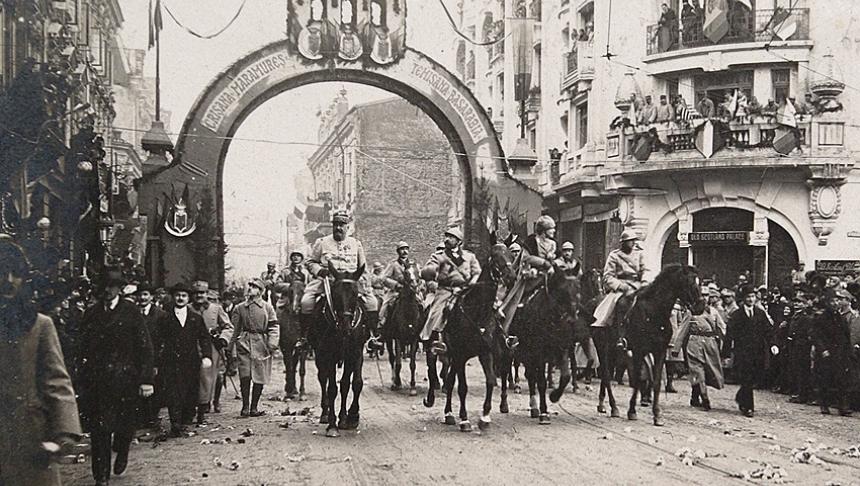 On December 1, when the Transylvanians voted in Alba Iulia for the union with Romania, Queen Marie along with King Ferdinand and General Berthelot returned triumphantly in Bucharest after two years of dreadful despair and exile, of struggle and heroism: “The whole city was delirious. […] now we were returning victorious, despite the misfortunes, we were returning after we had fulfilled the Dream of Ages, the Golden Dream of Romania. We were returning with Greater Romania- we were returning as king and queen of all Romanians. It’s almost unbelievable, but it’s true!”. Joy finally filled the streets of Bucharest. It was December 1, 1918 and Romania lived the most important moment in its history.

“Everything that followed, the days, weeks, and months, were muddled, it was like a single day of endless feast, when man is above life, uplifted, carried by too much joy for the soul to encompass.

A triumphal arch rose on the boulevard two or three steps away from Victory Avenue. On the columns of the arch all the victories of the Entente were inscribed […].

It’s November 1918. A wet cold penetrates the bones, and yet a huge crowd has gathered around the Arch of Triumph, under which King Ferdinand, Queen Marie, General Berthelot, the French and Romanian armies would pass.

I rented a window upstairs so I and the children could look and not miss out any details of the splendour of this unique parade.

Some sort of fever keeps me at the window glass, with burning eyes pinned to the place where our royal family must appear.

The children were picked up and placed on the window pane so they can see better.

Suddenly, the war song of the French suddenly broke out: Sambre et Meuse. I also burst into tears and in bouts of crying, overwhelmed by the solemnity of the moment.

Queen Marie, in the uniform of a roșiori general, on a superb horse, adorable in the majesty of her beauty and in her royal majesty, then King Ferdinand, the creator of our national unity, and General Berthelot, jovial, massive and imposing on a mighty horse that seems to defy his burden.

Flowers were flying everywhere towards them: from the balconies, from the sidewalk, from baskets, from the thousands of arms of the crowds.

It’s spring in November, with roses and carnations, which rejuvenates this autumn in which we saw the fulfilment of our millenary dream.

The parade began. Our troops were marching together with the French troops, baptized by fire, by suffering, by the consecration of their sacrifices, by the greatness of an epic heroism.

Our mountain troops, the infantrymen, the stout and lively cavalrymen, with the light of youth in their eyes and the drunkenness of victory in their soul are marching proud. […]

The cheers intensify. It’s like a wave that swells and rolls over the dikes. On uniforms, on heads, on horses, on gun carriages, under the wheels, the rain of petals swerves endlessly. It seems like flowers have wings and are joyfully criss-crossing during this great holiday. […]

It was only for a moment. But it’s enough to live this moment once to fill an entire life with it.

All this time, the children stood at the window with their eyes fixed. They are still small, yet able to understand what’s going on. I showed them the armies that go by and explain to them what role they played in the great world war.

When everything is over, I take them in my arms and I tell them with damp eyes:

«No matter how many days will God give you, you will not forget that it was you who saw the greatest celebration of the Romanian people! »

It’s been several decades since. The children are now all grown up.

They’re each at their own homes. Each one remembers in detail the Victory Parade of November 1918.”