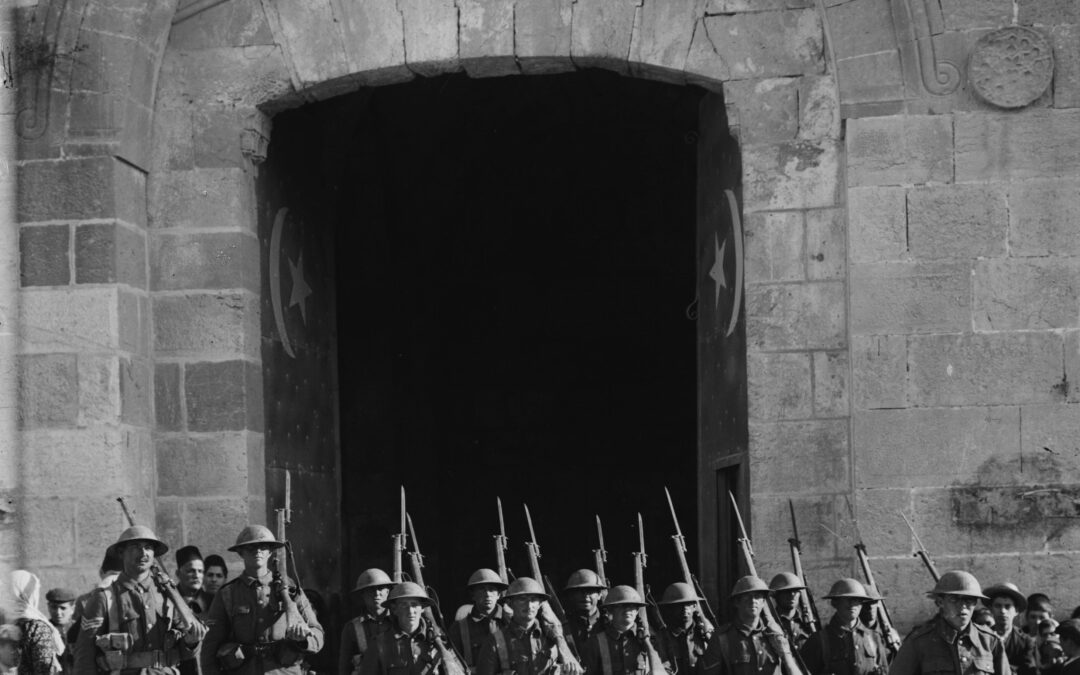 In December 1917 Jerusalem Falls and ends Turk Plan To Seize Suez Canal. The Battle of Jerusalem occurred during the British Empire’s “Jerusalem Operations” against the Ottoman Empire, in World War I, when fighting for the city developed from 17 November, continuing after the surrender until 30 December 1917, to secure the final objective of the Southern Palestine Offensive during the Sinai and Palestine Campaign of World War I.

The capture of Jerusalem by British forces marks the end of more than 1,200 years of the seat of the Christian religion being held by the Mohammedans. For 673 years the Holy City has been in undisputed ownership of the Turks, the last Christian ruler of Jerusalem being the German Emperor Frederick the Second, whose short-lived dominion lasted from 1229 to 1244.

The fall of Jerusalem marks the definitive collapse of the long protracted effort of the Turks to capture the Suez Canal and invade Egypt. In November 1914, a Turkish army marched on the Suez Canal and succeeded in reaching within striking distance of the great artificial waterways, before being pushed back. In 1915 the Turks, with German backing, reached as close as 85 miles east of the canal, but again were beaten back. In 1916 the Turks again advanced on the canal, reaching within fifteen miles of it. Here they were decisively defeated and driven out of Egypt, and the British forces crossed the border into Palestine.

On March 5th of this year, the British captured Hebron, fifteen miles south of Jerusalem. The campaign, however, lapsed into stagnancy due to the heat of the summer, but was renewed with a setting in of cool weather this fall.

By November, Gaza was in the hands of the British. General Allenby, the British commander, kept his forces near the coast, and in rapid motions pushed on to Jaffa – the Port of Jerusalem. By November 22nd the British were within five miles of Jerusalem, cutting the city virtually off on all sides but the East. Few details have come through since that date, but the encircling movement must have been carried out with considerable speed, resulting in the surrender of the city.

Jerusalem contains about 60,000 inhabitants and is the home of pestilence, filth and fevers, but in historic interest it naturally surpasses, to Christians, all other places in the world. Since the days when Joshua wrestled it from the hands of the Jebusites, making it the capital of the Jewish race, Jerusalem has been the prize and prey of half the races of the world. It has passed successfully into the hands of the Assyrians, Babylonians, Greeks, Romans, Persians, Arabs, the motley crowds of the Crusaders, finally to fall before the Turks.