DOCUMENT: The Declaration of Independence of the Moldavian Democratic Republic 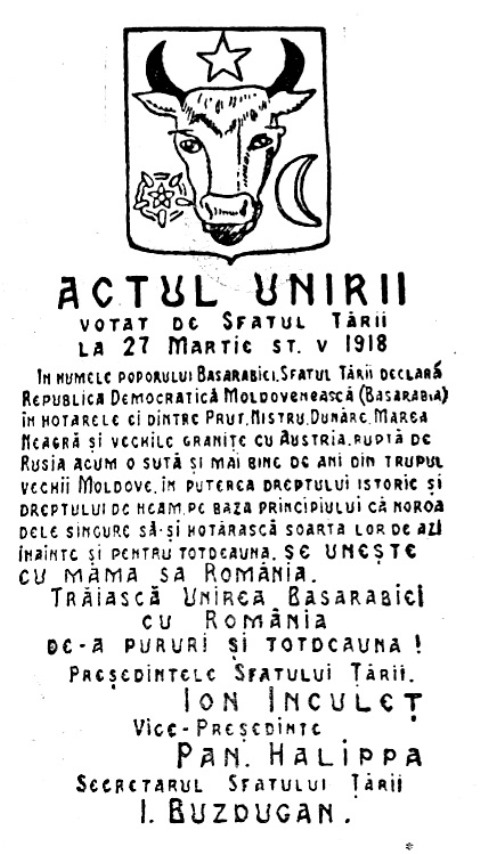 One of the main decisions taken after the Russian Revolution of 1917 was the proclamation of the right of self-determination of the peoples of Russia. Thus, on December 2/15, 1917, the Council of the Country promulgated Bessarabia’s declaration of autonomy, which later on January 24, 1918, was to be completed by the Declaration of Independence of the Moldavian Democratic Republic, as follows:

“Moldavians and twin peoples of the Moldavian Republic!

The great Russian revolution pulled us out from the darkness of slavery, in which we bitterly lived for far too long and has put us forth on the path of liberty, justice, and brotherhood! Through your sacrifice and all your struggle, our country, by exercising its right won by the revolution, to decide its own fate, has been declared a free democratic Republic.

Brethren by the blood shed under the flags of the revolution, we have shown our unwavering desire to live in union with the republics established on the land of the former Russian Empire, all of them together constituting, the great Russian federal democratic republic.

But the changing times and the political circumstances of today completely impede the realization of this union. The democratic republic of Ukraine, our neighbour across the Dniester, proclaimed itself independent, and thus we are separated from Russia and the republics that formed in its old frontiers.

In such circumstances, we are also obliged to proclaim, in union with the will of the people, a free, self-contained and independent Moldavian democratic republic with its own right to decide its destiny in the future.

The proclamation of independence is a political requirement of the time, for the Moldavian Republic can no longer expect from anyone to organize its life, and the peoples of the Republic must understand that their future is their own and that this future can only be accomplished by the establishment of a polity – the Council of the Country and its government – the Council of Ministers.

The independent Moldavian Republic aims for peace and friendly understanding in the political and economic life with all distant and neighbouring countries, counting war as the greatest enemy of the peoples and countries. So, in its outward policy, the independent Moldavian Republic will pursue the conclusion of democratic collective peace as much as possible with all fellow countries.

In its inward politics, the independent Moldavian Republic, guaranteeing full rights to all nations, will continue with the strengthening of the liberties gained through the revolution and proclaimed by the Declaration of the Council of the Country of December 2, 1917.

In particular, the Council of the Country and the Council of Ministers of the Moldavian Republic will summon the people’s assembly as soon as possible, on the grounds of the collective will, which will decide on the internal order of the country and its union with other countries, if it will be demanded by the good of the peoples of our republic.

Secondly, the Council of the Country and the Council of Ministers of the independent Moldavian Republic will take steps to decide the land matter in the shortest possible time. It will pass it into the hands of ploughmen without any payment, on the basis of a just rule, as stated in the December 2 declaration.

Besides that, the Council of the Country and the government of the Moldavian Republic are aiming to work as soon as possible on a whole series of laws and measures that will satisfy the present needs of the country in order to get it out of the darkness, poverty and hunger.

Moldavians and twin peoples of the Republic of Moldova!

We are at the most significant crossroad of our history! The future of the country depends on your conscience and wisdom. Through the arrival of our brotherly Romanian troops on the land of our republic a favourable state for a diligent and ordained work in all the fields of life was created. The Romanian armies came to defend the rail roads and the bread storehouses for the front; but their being on our land also helps by instituting order in the country, and today, the labour of every citizen of the republic is secured against the greed of criminals.

Romanian troops do not have any other purposes on the land of the republic. All the rumours that the Romanians have come to seize our country and rule us do not fit the truth and are spread by the enemies of our country. France, England and America with their testimonies, as well as the declarations of the Romanian representatives guarantee that the Romanian armies do not jeopardize our independence, liberty and the rights gained through the revolution.

Moldavians and twin peoples of the Moldavian Republic!

Being convinced that the building of our lives will not be disturbed by anyone and that nothing threatens the independence and liberties acquired through the revolution, we call everyone to unity, to orderly work and calm for the well-being and benefit of all the peoples of the democratic Moldavian Republic, now and forever independent.