Everyday life in a Romanian city during the German occupation 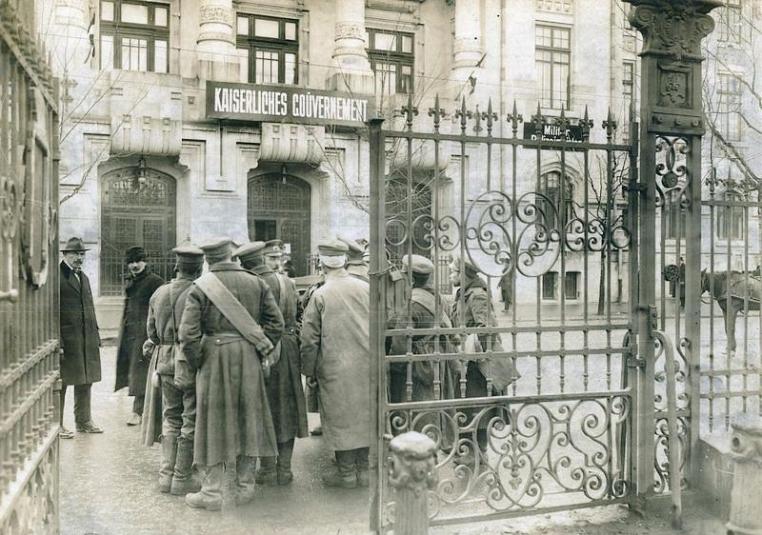 Ramnicu Valcea was under German occupation for two years, starting from November 1916. The arrival of the German army in the city meant rationalization of consumption, speculation and, at the same time, more taxes for the people who did not manage to leave the city.

After the German troops arrived, all resources in the city, including food, were requisitioned. In 1917, the army seized almost all animals, wine, walnuts and beans. The inhabitants were forced to gather chestnuts and pumpkin seeds and to hand over to the Germans “old boots, pieces of any kind of leather, small pieces of cloth of any kind, garments such as shirts, gloves and bedding”.

In the same year, the city authorities raised 25.000 lei after collecting the taxes, 50% less than the previous years. This has led to the introduction of new taxes, including for “dog keeping”.

“The budget revenues of the municipality no longer corresponded to the peace ones. It sought to increase these revenues by imposing new taxes. The most original was the fee for “keeping dogs”, amounting to 36 lei per year, depending on the number of animals owned “, says Bogdan Aleca, researcher at the Valcea County Directorate of the National Archives of Romania (DJVAN).

The Communal Council decided to introduce a toll on bread to support the canteen where the poor population of Ramnic was eating. The City Hall has set a fee of 2 bani per piece while a bread would cost 30 bani.

From the documents kept at DJVAN we discover, besides the fact that the bread was quite expensive, that the merchant who handled the city supplies was profiteering from people. The bread was of inferior quality and weighed much less than the seller claimed.

”A control of city hall officials showed that the bread was baked out of the most common flour mixed with bran and brandy, and the weight was inferior to the one displayed. Following the check, it was decided that the bread would be made of clean flour, not to be mixed with the leek, for a weight of 880 grams, applying a label to prevent the sale out of the city, in pubs, restaurants or bars, over the number of cards and ration”, says Bogdan Aleca.

According to the order given by the German Stage Command 270, the daily bread ratio was set at 500 grams per capita.

German measures to rationalize food enriched speculators. They bought fruit, meat, eggs or milk from peasants from other localities and sold them at an overpriced rate while most of the Romanians suffered from hunger.

“At that time, speculation was like a scourge. Food speculation brought wealth, and illegal trade flourished, even with the support of officials, “says Bogdan Aleca.

In September 1917, a communal agent, Budisteanu, informed the municipality that a woman from Brezoi entered the city to sell various items. The vendor escaped because she came to an “understanding” with a local police representative: “In the Trojan countryside, I met a two-horse-driven wagon, accompanied by a lady from Brezoi, with 400 eggs, two pigs, 20 chickens, five geese, four ducks and melted butter and while I was watching some egg-buying supplies and others, the city police subcommittee picked up the wagon, took her to the local police. (…) And afterwards I see that the wagon was released”, says the document kept at DJVAN.                                  A man who sold over-the-counter cheeses purchased from a factory in Baile Govora did not have the same luck.

He was reported to the police after being indicted for illegal trade. But many speculators, despite prohibitions, managed to sell various goods right under the watchful eye of German soldiers.

During the occupation, some measures were also taken that led to the development of the city: a school was set up to teach in German, the Zauvoi park was opened, the cinema was re-established. Also, after the Germans complained about the city’s misery, the authorities ordered measures to sanitize the city.