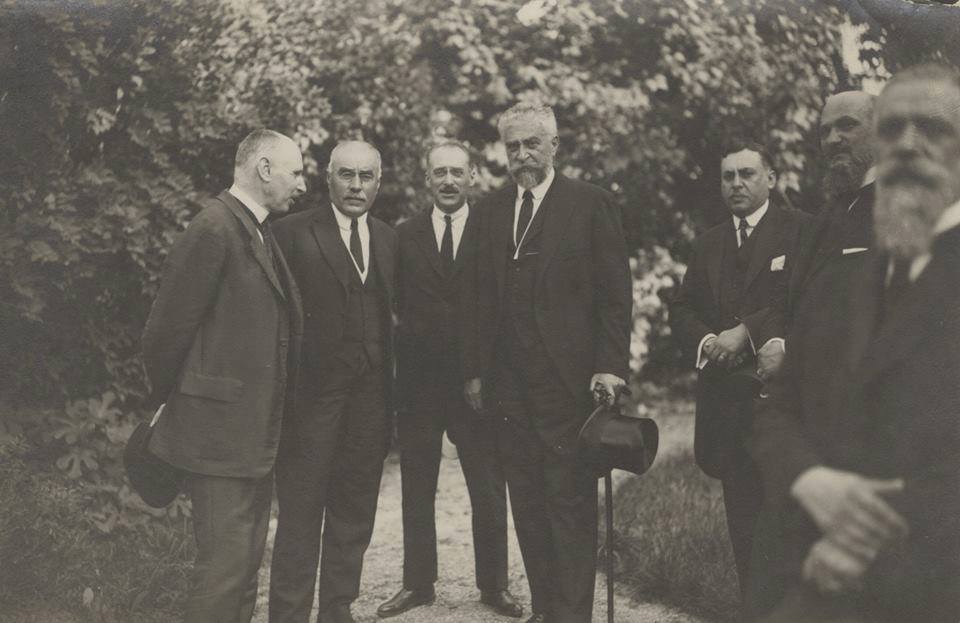 On the 7th of February 1918, Romanian Prime Minister Ion I.C. Brătianu sent a telegram to the diplomatic representatives of the allied countries informing them of the request made by the Germans to conclude a separate peace and of the two alternatives that were left for King Ferdinand: starting military operations or concluding the peace.

The telegram was sent in an extremely difficult time for Romania. The great military victories in the summer of 1917, at Mărăști, Mărășești and Oituz, could not be capitalized because of developments in Russia. The October Revolution brought the Bolsheviks to power who signed a truce with the Central Powers at Brest-Litovsk (the 22nd of November).

Because of this, the Romanian government, which was forced to relocate to Iași, following the occupation of the capital by German troops, was forced to accept an armistice on the 26th of November in Focşani.

In the weeks that followed, chaos erupted among the Russian troops still in Romania. The disorderly retreat of Russian soldiers, emboldened by Lenin to desert, led to a direct confrontation with the Romanian army (the Battle of Galați – January 1918).

The change in the ratio of forces on the Romanian front, caused by the withdrawal of the Russian troops, led general Marshal von Mackensen, the commander of the German forces, to demand the renegotiation of the Focșani Armistice at the end of January 1918.

The two sides resumed negotiations in the first days of February in Focşani. After several days of talks, the German side interrupted the negotiations and urged Romania to conclude a separate peace. In this context, Romanian Prime Minister Ion I.C. Bratianu sent the following telegram to the diplomatic representatives of the allied countries:

“Iași through Thessaloniki the 7th of February 1918

The Germans have ceased negotiations regarding the armistice with the Romanian military representatives, demanding that the Romanian Government should send its representatives to the peace talks by Saturday afternoon. Their written statements are also of the nature that it is impossible to accept that such an approach will not be followed by immediate military action in the case of a refusal on our part.

With the exception of the peace negotiations that could, I hope, bring about two or three weeks of pause, I see the disaster as irreparable and immediate. The beginning of the negotiations would convince the public opinion in Moldova and in the occupied territory about the true intentions of the enemy that Beldiman, Marghiloman, etc. (conservative politicians – n.r.) try to portray as a true friend.

My personal decision is taken. If it is not adopted by the conservatives in the Government, there are only two solutions left for His Majesty the King: 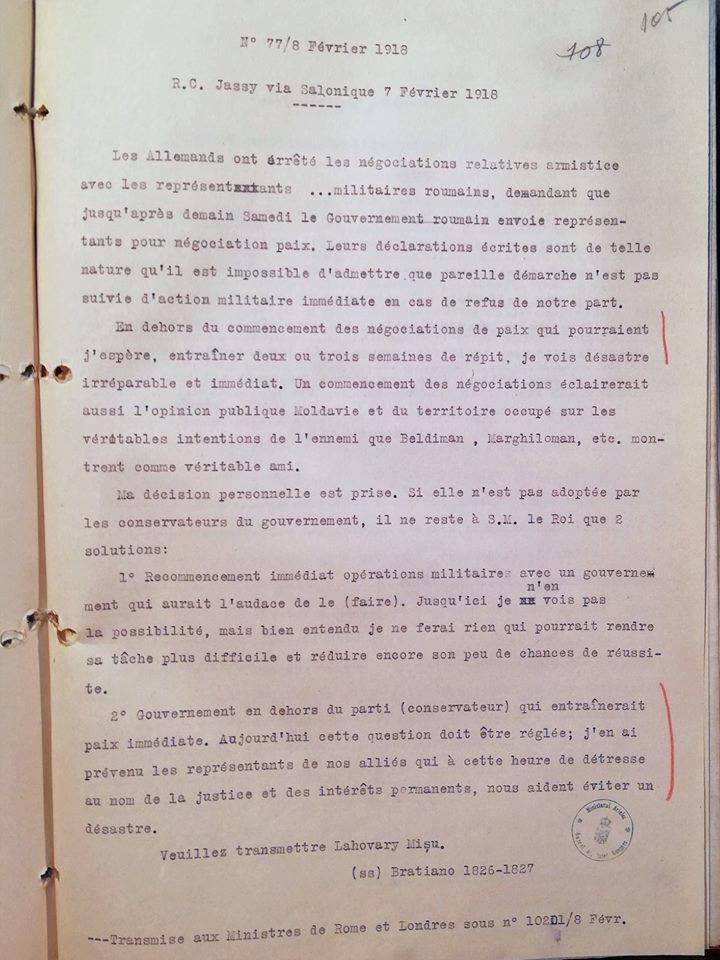 Indeed, in the absence of the Russian support, Romania had no choice and it was forced to conclude a separate peace with the Central Powers. On the 9th of February, two days after sending this telegram, Ion I.C. Bratianu resigned. General Alexander Averescu was tasked with forming a government that began negotiations to sign a peace treaty.

Telegram sent by Romanian Prime Minister Ion I.C. Bratianu to the diplomatic representatives from the allied countries, regarding the request made by the Germans to conclude a separate peace. (National Archives of Romania, Collection of the Council of Ministers, dos 4/1917, p. 105).