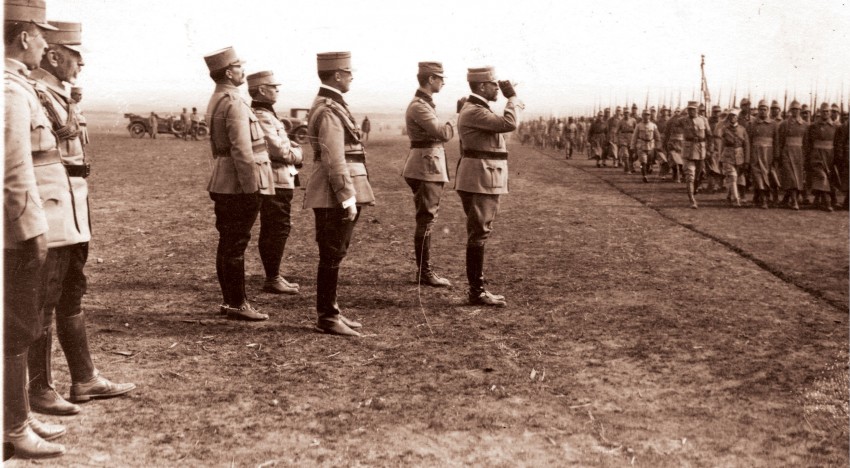 The defeat of Bulgaria on September 28, 1918 at the hands of Allied troops on the Macedonian Front paved the way for further politico-military developments in the Balkans and beyond. The arrival of General Henri Berthelot to Thessaloniki and the creation of the Army of the Danube put pressure on the remobilization and re-entry of Romania into the war.

On September 15, 1918, troops led by General Louis Franchet d’Esperey launched the long-awaited offensive of the Allied army on the Macedonian Front. On the Thessaloniki Front, two French divisions and a Serbian division attacked the front of the 11th German Army, largely composed of Bulgarian forces. In just two days, the Bulgarian defensive lines were pierced, and the Bulgarian army withdrew hastily. On September 28, the Bulgarian High Command requested an armistice. One day later the armistice was signed and Allied troops were allowed free passage on the territory of Bulgaria. Allied troops continued their advance further north, being slowed down only by inadequate roads and railways. Soon the Romanian Front was established on the Danube.

On September 30, Clemenceau recalled General Henri Berthelot from the command of the Fifth Army on the Western Front and put him in charge of the newly created Army of the Danube, with the mission to occupy Bulgaria and at the same time, to embolden Romania to get back into the fight. The Romanian army was to play a central role in defeating Mackensen’s forces, then occupying Transylvania and cooperating with Allied contingents who were to intervene in southern Russia against the Bolsheviks. Arriving in Thessaloniki, Berthelot sent a letter to the French ambassador in Romania, the Count of Saint-Aulaire, in which he outlined his plans. The French general, together with the army he was leading, was to cross the Danube in mid-November. “It is imperative that Romania take up arms in order to prove its loyalty to the Entente, to liberate its national territory and to win once more the right to realize its national claims”. Saint-Aulaire presented Berthelot’s letter to King Ferdinand, to Ionel Brătianu and to the commanders of the Romanian army. Some of the Romanian generals were quite sceptical in regards to the possibility of a rapid mobilization of the army. With one exception. General Alexandru Averescu advised King Ferdinand to change the Marghiloman government and to immediately start mobilization, “so that general peace will find us weapon in hand and, if possible, with one foot on the territories we claim”. While the commanders of the Romanian army were still discussing how to mobilize, things were changing with astonishing speed on the Western Front. The German army had major problems on the Western front, Ludendorff had been sacked, the German navy had rebelled, revolts and nationalist uprisings broke out in Austria-Hungary, the Italian Front collapsed, and the Austrian High Command signed the Armistice at Villa Giusti in Padua (November 4). The armistice forced German troops to evacuate Italy, the Balkans and Austria-Hungary within 15 days or face capture.

Under such conditions, the Romanian Foreign Minister, Arion, telegraphed to King Ferdinand in Iași, that German troops were preparing to leave the areas they occupied in Romania and that anarchy could follow. “It is necessary to have gendarmes immediately available, and in short order the Romanian troops”. There was no more time for hesitation, and King Ferdinand acted accordingly.