From the diary of a hero-poet. “Come tomorrow, there we will be many more of us who will know the glorious comfort of death” 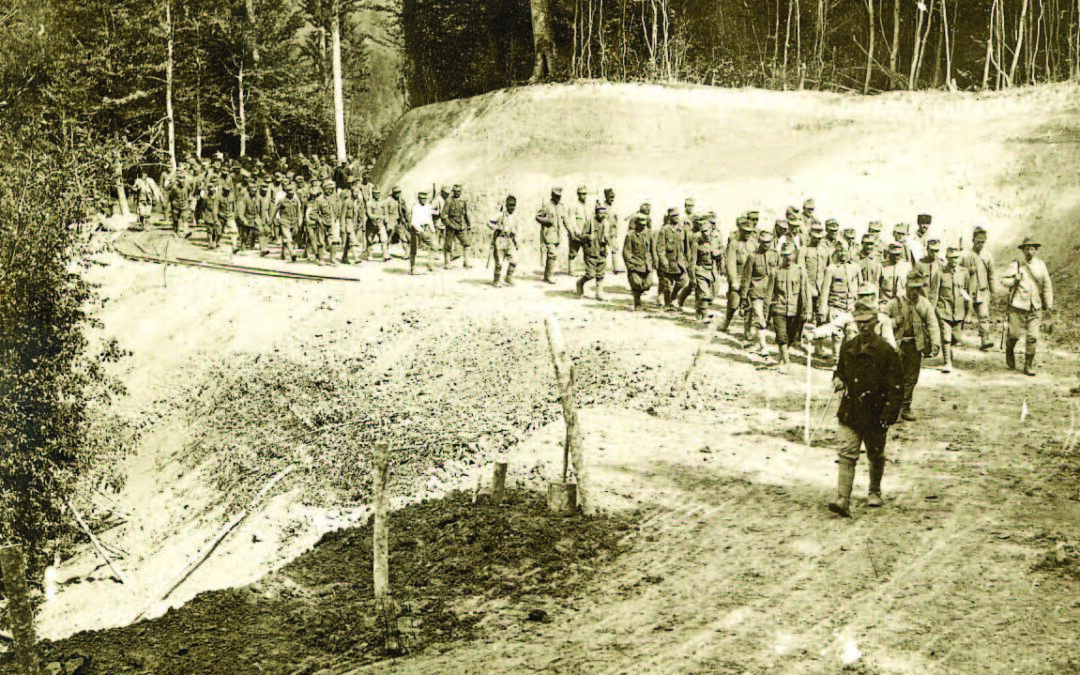 One of the thousands of heroes of the Great War who have left their testimonies and had written about their experience on the front, is Constantin T. Stoika. He died at the end of October 1916, on the Olt Valley. His journal was published in 1921, in an edition edited by Ovid Densușianu.

I went with the battalion commander to reconnoitre the flanks of the security sector. Near a ditch, under the tent and in the middle of the troop, I met Lieutenant Cuțui, my former Latin teacher. Under the uniform and rigid clothes one could no longer recognize the soul of the classical teacher, of the patient teacher who opened my eyes so long ago to Tacitus and Lucretius. I was watching the lieutenant, in this new facet of his life, shrivelling in the morning wind, with a severe melancholy in his eyes, and suddenly the quiet and sweet hours of Latin of my years of study appeared in my mind. Then, the methodical Latinist was preparing for a peaceful career in life, preaching work under the sacred purview of social peace; now, there he is himself, with sword in his hand, spurning his principles, waiting for the disquieting enemy just within a few thousand steps.

How stupid seemed to me the gigantic conventional lie that was nurtured in my childhood. I had the impression that I was asleep for two decades, reading Anatole France, Reinach and all the pacifists of Europe in a dream. The great thinkers now were illusions that left behind memories of reverie, but still, my disappointed soul clung to me, torturing me. Like me, the Latin teacher made an ideal out of the splendid abstractions of the human mind, a righteous church born out of the library of peace […].

The sentries brought a German prisoner who had surrendered to them in the middle of the night, suffering and mutilated by the cold. He was part of the mountain troops. Near our camp fire, he ate, took the chill off and told us, without investigating him too much, that in front of us are two battalions of mountain troops, the 253nd Infantry Regiment and a regiment of the Bavarian guard: he told us nothing about the artillery. We found upon him, in addition to intimate photos and family letters, the book of a Serbian soldier, because he had also fought in Serbia, his name tag, a Franco-German vade mecum, because he had also fought at Verdun, a map with the borders of our country, on which two directions were found: Budapest-Făgăraș and Budapest-Sibiu, a book with daily entries, from which we saw that the German mountain troops arrived in our mountains starting with October 1, and a prayer book. The prisoner inspired mercy. In all his confessions he was quiet and one could not see any sort of Teutonic pride, even when his army was praised. He was asked why he was fighting for a country that was not his own and for a people who until yesterday was his unspoken enemy. He paused for a moment and answered briefly: because I have to.

Where machine guns cut through the air and the iron rain fell supported by shells and shrapnel, Lieutenant Ganovici strengthened the hearts weakened by the sight of the carnage. Up, on the ridge line, he commanded gunfire, and there, with his gaze lit by the divine light of victory, toward sacred Transylvania, a howitzer enveloped him in smoke and shrapnel cut off his legs. On the cold stone of the road he still lay at dawn, and his white and serene figure was bruised and writhe with pain. The soldiers looked at him with the love of a brother, as all found comfort in his heart when they needed. Never has an injured man been surrounded with more love. We all knew him as a soul without the shadow of passion […]. I, who write these in the dampness of a pit and under enemy howitzers, cannot forget this hero. Come tomorrow, there we will be many more of us who will know the glorious comfort of death. Those who remain will have to break the silence that is so quickly descended over those who are no longer. The country, in these historical moments, has use for such sacred memories. If we all thought fondly of our cherished dead, we could embolden the strength of the souls that are hard tried now […]. From my damp, sacred shadow, receive, as long as there is time, the greeting of a comrade.”