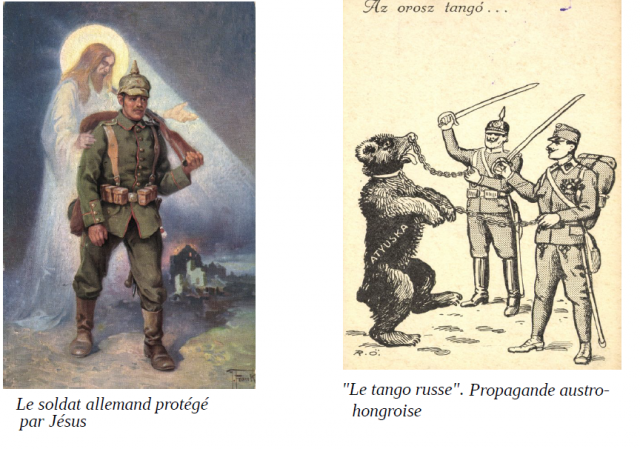 In order to break the resistance of the Romanians, the Central Powers, especially Germany, also used propaganda as a weapon. In the occupied territory of southern Romania, newspapers were published, presenting the messages and the views of the occupying forces, in both Romanian and German (“Gazeta Bucureștilor”, “Bukarester Tagblatt”, “Săptămâna ilustrată”, “Rumänien in Wört und Bild”, “Lumina”). There were also numerous manifestoes addressed to Romanian soldiers, which asked them to surrender in exchange for different promises.

The armies of the Central Powers hoped to soften the resistance of the Romanian soldiers, most of them being from peasant families, by spreading rumours that land was given to the peasants and that freedom was offered in exchange for their surrender. These rumours were spread ever since the end of 1916, when Romanian troops withdrew to Moldavia.

On June 7, 1917, before the great battles of that summer at Mărăști, Mărășești, and Oituz, the Information Office within the Great General Headquarters of the Romanian army came in the possession of a secret document, issued by General Kreyensberg, the commander of 62nd German Infantry Brigade Brigade, who was overseeing the development of “propaganda activity on the Romanian Front”.

According to the document, the purpose of this propaganda was to disorganize Romanian military units and especially the First Army on the Moldavian Front. The methods they used varied from throwing propaganda materials (newspapers, posters) into Romanian lines, as well as by influencing of the masses through speeches in order to “gain the trust of worthy people”, that is to say, traitors and deserters.

Surveillance posts on the front were turned to favourable meeting points where the interpreters lured in the credulous or those weak in spirit. They were reassured that the meetings would be peaceful, they were promised that they would not be shot or that the area will not be bombed, that they would be given tobacco, all in order to gain the confidence of the Romanian soldiers. The positions of artillery observers were avoided, as they were not found to be conducive to German propaganda, as the presence of French officers and instructors was assumed.

It was advised to avoid loud cries, which “would further terrify an enemy as fearful as the Romanian and would perhaps alarm of the whole position”. The disregard for the Romanian soldier by calling him “false and dishonest” was part of the campaign to denigrate the enemy.

The order drew attention to the danger of “traps to capture or shoot our agents carrying out propaganda” and required their training “on the alleged distribution of our forces.”

In order to counteract Romanian propaganda, it was ordered that the “letters and prints that the enemy would send in our ranks should be taken without reaching the hands of the troops, and handing them to the German head of the Intelligence Bureau untouched and unopened.”

The case of Metropolitan Conon Arămescu-Donici

The Central Powers also received the help of different personalities in occupied Romania, known for their Germanophile sentiment. An interesting case is that of the cleric Conon Arămescu-Donici, metropolitan-primate of the Romanian Orthodox Church from 1912 to 1918. In the summer of 1917, during the battles on the Moldavian front, he gave in to the pressures of the occupation forces and some collaborators and agreed to sign a manifesto addressed to the Romanian soldiers asking them to cease their resistance against the armies of the Central Powers.

“Peasants, townsfolk, clerks and whatever you may be, have good faith that the conqueror who enters Moldavia is not seeking revenge, it does not kill, it does not rob, it does not set fire and it does not wreak havoc. Here, in Muntenia, the assets, houses, and even our honour were respected, together we worked the land of the country and it bore fruit. God soothed the wrath of the war and blessed our work. Do not be afraid brothers and don’t take the wandering path. With longing and with a thought of peace we turn to you and urge you to stay in your place. You have defended your country with dignity, you have done your duty fully…”.

After the end of the war, Metropolitan Conon Arămescu-Donici retired from office, the main reason being the collaboration with the occupation authorities.

Aware of the German propaganda, the Romanian military authorities were able to take appropriate counter measures, annihilating the activity of German propaganda. The results were seen in July-August 1917, when the Romanian army triumphed in the battlefields of Mărăști, Mărășești and Oituz.

Alexandru A. Mares, Românii în Războiul de Întregire a neamului. Din suferințele populației și ale prizonierilor [Romanians and the People’s Unification War. From the sufferings of the population and prisoners], in Historia magazine, no. 90, June 2009.