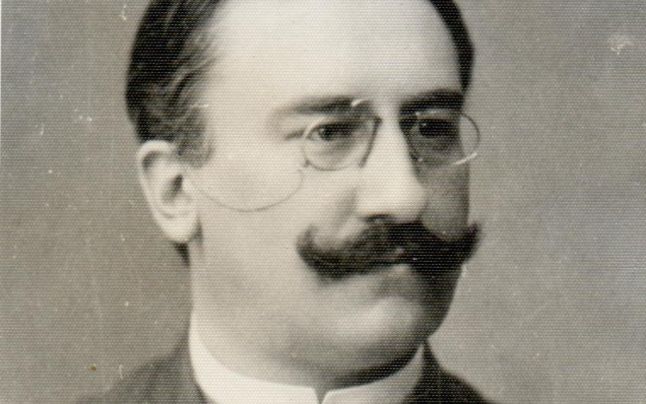 1907, Budapest. Count Apponyi, Minister of Education in the Hungarian Government, prepares a set of laws that would have led to the Magyarization of primary schools not only in Transylvania, but in other territories administered by the Crown of Saint Stephen. The young Romanian deputy, Alexandru Vaida Voevod, elected in the Chamber of Deputies only one year prior, opposed Apponyi’s discriminatory laws, which he “fought not only from a national point of view, but also from a democratic and social one, because they weren’t aimed at raising the cultural level, but in order to frustrate non-Hungarian citizens in their endeavour for cultural uplifting, in order to benefit in the free competition for existence of the same possibilities as the sons of the urban privileged classes”, as Vaida Voevod noted in his Memorii.

A young man from Olpret at the gates of Budapest

It was February 27, 1872, when Alexandru was born in the family of Dionisie Vaida and Anna Bohățiel, the daughter of Alexandru Bohățiel, a participant of the 1848 revolution. One year later, his brother, Ioan Vaida was born. But Ana suffered from puerperal fever and she could not be saved by any of the doctors brought from Cluj.

Even with all of his grieving Dionosie still had to take care of the two boys. Of course, with a little help. Dionisie Vaida was not just a peasant from Olpret [today, Bobâlna]. He was the heir of an old and wealthy family- one of the few Romanians in Transylvania with such a situation- who was related on his mother’s side with the Boer family. Besides, Dionisie was an active supporter of the emancipation of Transylvanian Romanians and he was a famous person in Cluj.

Dionisie took care of the boys’ education as he knew best. First, he sent them to a unitary school in Cluj and for high school they went to Bistrița. Although they spoke Romanian and Hungarian, Dionisie thought it would be better to send them to a German gymnasium. “After passing through the hardships of learning the Hungarian language, I was met by the mysteries of Goethe’s language. From «tatik, tetik» to «der, die, das». I did not speak a speck of German” the former politician wrote. But he learned it and was in the top four of his class, and his father was satisfied.

Education at the German school was strict and it involved corporal punishment. “«Stretch out your palm» and the teacher’s cane would hit once or twice or more the palm of the offender. He would either bend over the chair down and would hit him over the rear with the Spanish reed cane” notes Vaida Voevod in his memoirs. It was an unpleasant business and a habit that Dionisie did not tolerate. However, one-time Alexandru threw an apple to a fellow pupil. The censor marked him on the blackboard. Revolted, Alexandru protested. The censor added a cross over his name. Alexandru continued with a series of insults in German, few, because he didn’t know too many. The censor continued to mark crosses. When the teacher came into the classroom and read his name on the blackboard, he ran out of the classroom. He explained to his father what had happened, and he went to talk with the school principal. The result delighted the young Vaida: he was not subjected to corporal punishment, and he was taken out of singing class, where the incident had occurred.

Alexandru and Ioan, being almost the same age, spent their childhood together and studied in the same schools- after the Saxon school in Bistrița, they attended for a period a Romanian school in Brașov. “Between us there was this traditional sense of brotherhood. If one of us bought candies, cherries, etc., it would be split down the middle: one for you, one for me, until it was all finished in good order. The frequent but insignificant quarrels and controversies were childish, for example, I spat out, with a loud sound, the cherry pips. Ioan was a stranger to this artistic invention. He threw the pips with his hand. I insisted for him to imitate my method, but he refused. Ioan sneezed clumsily like a cat, I like a trumpet. John, refractory, refused to accept as aesthetic the sound that I usually caused” wrote Alexandru Vaida Voevod.