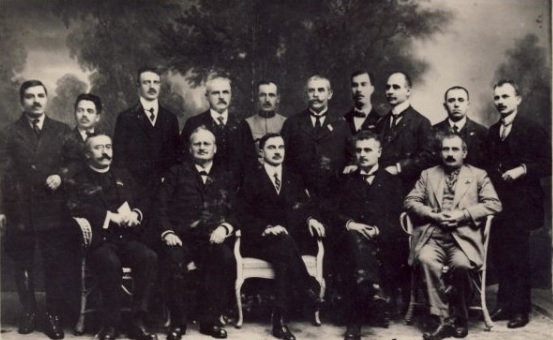 Vaid Voevod went with his brother to study in Vienna, where he enrolled at the Faculty of Medicine. After finishing his studies, in 1901, he married Elena E. Safrano, affectionally called Lencica, who bore him four children. With a doctor’s degree in medicine, he moved to Karlsbad, where he worked for a brief period as a balneologist. Karlsbad was a favourite destination for many Romanians at that time. Even Vaida Voevod returned when he was free in the summers.

Many famous names of the era frequented Karlsbad, especially from the literary sphere. For example, among those with frequent outings at the restaurants and in the parks were George Coşbuc and I.L. Caragiale. “Lencica had great sympathy for Coșbuc, a man who was naturally distinguished by his delicacy and sentimentalism. Caragiale was an extreme observer of the conventional ceremony and of the forms of social routine, but I was delighted by his subversive sarcasm, which he so aptly used to characterize people and states. When the men were alone, the two great masters competed in their opinions on the production of modern art and literature.”

Another great writer of the time with which Vaida Voevod had connections in Karlsbad was Barbu Ştefănescu Delavrancea. “He was my «client». He had stomach aches due to rotten cheese and wrote one of his dramas in bed. «I knew that the cheese was rotten» the writer said «but I was forced to swallow it, because there were two ladies who were watching me at the neighbouring table». Under my care, Barbu Șt. Delavrancea recovered in a couple of days” Vaida Voevod assures in his Memorii.

Even at the end of the nineteenth century, Vaida Voevod dedicated himself to the cause of the Romanians in Transylvania, along with his colleagues from the University of Vienna. Counselling, propaganda, protests, elections. At the age of 20, he joined the Romanian National Party. He ran for the first time in 1906, in Şomcuta Mare and Ighiu, but he only won at Ighiu. Then he entered the Chamber of Deputies in Budapest, where he remained until 1918. And his first gesture there was to constitute a “non-Hungarian national group”. Then, at the insistence of Gh. Pop de Băsești, the new president of the Romanian National Party, he published a daily newspaper in Budapest. Vaida Voevod, who often penned articles under various pseudonyms, was honoured by being sued for an article titled Apponyi.

Until 1918, as a member of the legislature in Budapest, in the Romanian group, Vaida Voevod opposed all initiatives that damaged Transylvanian interests and campaigned for a democratization of the empire’s policy. For example, in this context, he advocated for the adoption of an electoral law that would have also benefited citizens that were “disowned and out of the constitutional frameworks of state life”, as well as women.

The Romanian spokesman in Budapest

His role in the Hungarian Parliament put him on the forefront of the national movements of 1918. For example, on October 12, 1918, when the Executive Committee of the Romanian National Party met in Oradea and decided that the Romanians of Austria-Hungary will “have their seat among other free nations”, Alexandru Vaida Voevod was the one appointed to read this resolution in the Hungarian Parliament: “On October 18, 1918, due to the methods put into practice by Count István Tisza, being reduced to three Romanian deputies and the Slovaks to one, the Serbs and the Socialists having no single representative, it was relegated to me the honourable task of the duty to expound in the plenary sitting of the Chamber, the decision of the Romanian National Party, in a speech, that we refuse to recognize the right of the official bodies of Hungary and the Habsburg Monarchy to represent the interests of the peoples of that state at the peace conference by virtue of the Wilsonian points [the 14 points of US President Woodrow Wilson, which included the right of peoples to self-determination]”.

Returning to Transylvania, he drafted the regulation of the county and communal national guards and councils, thus preventing the outbreak of violent conflicts during the Union’s realization. He participated, of course, at the Great National Assembly in Alba Iulia, where the Union Resolution was voted and subsequently became a member of the Directing Council, in which he was elected vice-president.Translated by Laurențiu Dumitru Dologa