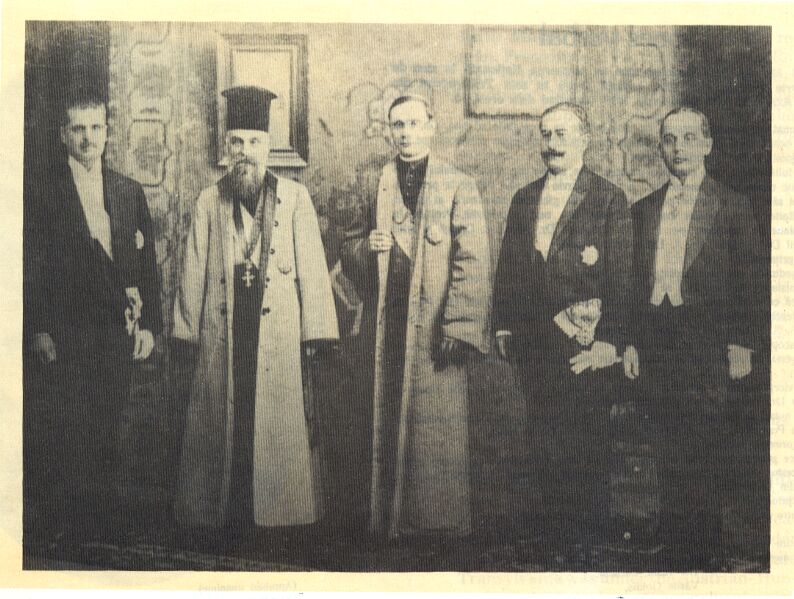 His memories of the Great Union were not entirely cheerful. Immediately after December 1, 1918, he left Alba Iulia and arrived in Sibiu, being accommodated at the Boulevard Hotel. On December 3, in the afternoon, he met Mihai Popovici, to whom he dictated the text to be handed over to King Ferdinand, of the proclamation of the Great National Assembly of December 1, regarding the Union of Transylvania, Banat and Partium under the Crown of Romania. About half an hour after he’d finished his frantic dictation, going back and forth in the room, he started feeling ill. He suddenly felt very weak, so he asked Mihai Popovici to help him undress and sit him on the bed.

“I feel like I’m losing my strength, I feel that I’m dying. That’s why I ask you to please get a car and go to Olpret [his place of birth] to arrive before the news came that I had died” he told Mihai Popovici, who nonetheless tried to encourage him even if he too was scared. While Popovici went to call Ion Sturza, Vaida Voevod laid in bed, increasingly overcome by his weakness. The doctor consulted him and advised him to get a nurse to stay overnight. It was, indeed, a rough night for Alexandru Vaida Voevod: “I improvised a thermophore, out of a fur cap, putting it on my stomach. The next day I ate rice soup and a Reisauflauf [rice pudding] sent by Mrs. Sturza. I rested in bed and on the next day I got up and went to Bucharest, together with Goldiş, as I had a car at my disposal. The hat thermophore- I wore it at all the solemnities in Bucharest and I endured with it, or thanks to it- the lamb is the Wallachian’s cure after all- all the meals that were consumed on this occasion” the politician noted in his Memorii.

Alexandru Vaida Voevod distinguished himself in Bucharest’s political life since the very beginning. Immediately after the Great National Assembly in Alba Iulia, he was appointed state minister for Transylvania, a post he held until 1919 and then resumed it in 1938 and 1940.

When the first parliamentary elections based on universal suffrage took place in November 1919, none of the political parties of the time passed the threshold to form the government, so a coalition was needed.So, at the end of 1919, all the representatives of parties from the Old Kingdom and from the newly united provinces with Romania gathered in Bucharest: “In Bucharest I was met by chaos, which was the very foundation of public life. We felt like we were in a madhouse. The locals thought that all was well and good. They saw in our conceptions the lack of experience in governing. We were, for them, the opposition, strangers to the art and the benefits of government, a kind of manic peasants, poor Hungarian déclassés” remembered Vaida Voevod of his first impression of the Romanian political scene. Backstage politics did not go unnoticed, but were somewhat misunderstood, temporary alliances, silent jubilation of the adversary’s misfortune, calling each other a “traitor” almost randomly. “The deputies in the new provinces did not understand anything. They were stunned in the midst of these situations, for them entirely new and inexplicable. I was almost the only one that could somewhat figure out the thousands of political machinations” Vaida continues in his Memorii.

However, even in this climate there were negotiations for the formation of a coalition government. For days on end, the parties gathered to discuss the creation of the new Council of Ministers. The first one that King Ferdinand had in mind for the post of prime minister was Iuliu Maniu, but because he refused, Alexandru Vaida Voevod was eventually elected as the first Prime Minister of Greater Romania. “Maniu was asked to take the post. It was in vain. Then, after we appealed to him from all sides, encountering his resistance, motivating that he could not take on this responsibility- because of his obligation to complete the organization of Transylvania as president of the Directing Council- Goga, taking the floor, proposed me. He appealed to me, declaring that I owe them to take the post, the internal and external political situation, being of such a nature that a delay was intolerable. The rest of the speech was what was common in such situations. Maniu and Iorga agreed with Goga’s proposal, and the others applauded, «acclaiming me»” the politician wrote of his election as the head of government on December 1, 1919.

He was also offered a second position, as the first president of the Chamber of Deputies in the Parliament of Greater Romania. The term was quite timely given the events, just as the protagonist recollected: “My election happened between the following: on the day when the office of the president of the venerable V. Stroiescu ceased and half of the mandates were verified, the President of the Chamber should have been elected. That day, at half past twelve, Maniu sent his cabinet chief, C. Savu, to me to urgently tell me to go to the Chamber at two o’clock in order to get elected president. That I had to take on this post was so natural that I did not even dwell on it. Bored with so many sessions, in which they all wavered and enticed each other with dignities, which required a great deal of accountability and, as usual, no one took the initiative, I took note of Maniu’s order as a natural duty that I had to accomplish. At two o’clock I was in the room.”

Given the offices he held during this period, Vaida Voevod was elected to take part of the Romanian delegation at the Peace Conference in Paris in 1919, and was also one of the seven delegates in the Transylvanian group. In the negotiations, he had the opportunity to negotiate with leaders such as George Clemenceau, Lloyd George, Tommaso Tittoni, Herbert Hoover, Arthur Balfour and Ferdinand Foch. However, all his foreign activity gave leeway to his opponents. In 1920, when he was abroad to obtain the international recognition for the acts of the Union, he left Ștefan Cicio Pop as his deputy. However, during this time, Brătianu managed to pull the strings in such a way that when Vaida Voevod returned he discovered that he was no longer prime minister.