How many Romanian prisoners were repatriated from Germany at the end of the First World War? 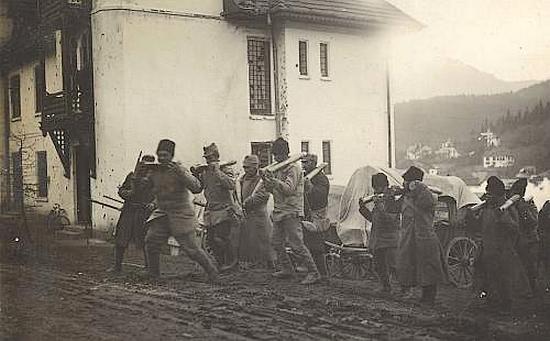 During the First World War, 142.653 Romanian prisoners were held in German camps. Most of them were released and repatriated in February 1919, following the efforts of the Romanian Military Mission in Berlin and the support provided by the Inter-Allied Commission in the German capital. Of the Romanian prisoners in Germany, only 99.197 returned home, the rest were declared dead, missing or had escaped.

In this regard, the head of the Romanian Military Mission in Berlin, Lieutenant-Colonel Emanoil Lupașcu, informed the Romanian military attaché in Paris, in the no. 266 report of February 10, 1919 that “the first sanitary train, that departed from Koenigsberg on 4 February, left Germany on February 7 through Annaberg-Oderberg, with 303 sick and infirm, to Bucharest. A second sanitary train left on February 7 from Danzig and the third is scheduled to leave on February 12 from Goettingen. In addition to these we have obtained two more German sanitary trains which will be sent by February 20 as well.”

This report also contains other information concerning the repatriation of Romanian prisoners in Germany at the end of the First World War:

“In general, the repatriation of prisoners has been delayed so far for the following reasons:

1. Lack of goodwill on the part of the German government and authorities who hoped to secure the release of prisoners from Mackensen‘s army;

2. The opposition of the Hungarian government to allow the passage of transports of Romanian prisoners, which was overcome by our intervention through Mr. General Dupont;

3. Lack of rolling stock and especially coal. This issue presented the greatest difficulties, as the German government wanted to supply the wagons and fuel only up to the German border, even though the Hungarian and Austro-German states were in the most daunting coal shortage.

The issue of rolling stock has been resolved by:

a) The German government declaring it would put at our disposal train carriages up to Brașov.

b) Obtaining Czechoslovak and Austro-German material for the transport of our prisoners from Oderberg to Brașov, in case Germany would reconsider its obligations or if would not be able to fulfil them. The first Czechoslovak trains, each carrying 800 prisoners, will leave Oderberg on February 11 and 12.

The coal issue is also about to be resolved, as we have so far collected 36 cars at Oderberg; they will be attached to each train separately, as the deposits setup in Hungary would not present a guarantee. Proof of the importance of the coal issue is that the Serbian transports, which started on February 1 and did not have such coal reserves, stopped in the Austro-Hungarian state because of a lack of fuel.

In addition, we are feverishly working so that the repatriation can be made on the Danube, with the preparation of barges for the transport of prisoners. The Inter-Allied Commission in Berlin asked Marshal Foch for approval to appoint an inter-allied sub-commission in Budapest to coordinate the movements of such vessels and to facilitate the passage through the various riparian states.

Through all the measures that were taken, we have real reasons to hope that the repatriation of prisoners from the camps will be completed by March 1, and then we will have to deal with the rounding up and the repatriation of the stragglers, whose number seems to be quite significant.”

In the spring of 1919, the Romanian military mission in Berlin mediated the repatriation, through the Oderberg centre, of 1.218 officers and 37.024 soldiers. The prisoners were quarantined in Brașov, Turnu Severin and Cotroceni-Bucharest.

Following the German revolution, a significant number of Romanian prisoners fled the camps, spreading to neighbouring countries, some of them being recovered at the stations established for this purpose in Oderberg, Krakow, Passan and Vienna, amounting to 1.614 officers and 6.000 soldiers.