How many Romanians fought for Austro-Hungary during the First World War? 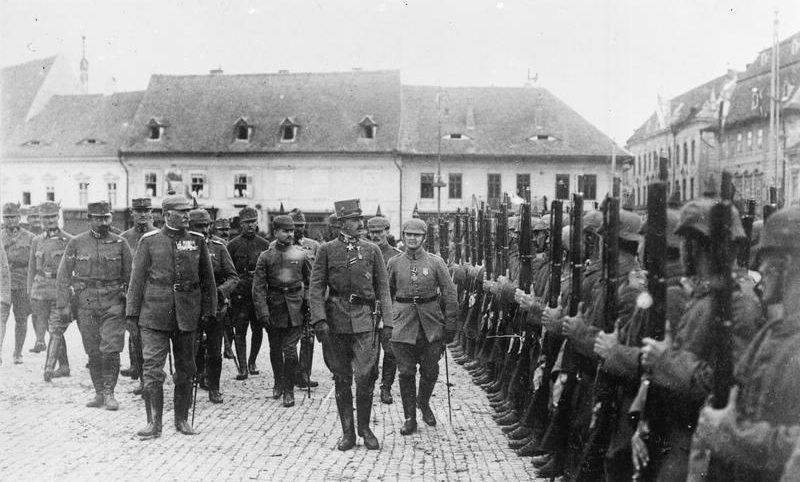 The First World War, besides the well-known political decisions and consequences, brought a great deal of suffering for many European peoples. We can include here those of the Romanian soldiers under foreign domination, who were forced to participate in this war fighting for the interests of the states of which they belonged to: the Romanian soldiers in the Austro-Hungarian army or those belonging to the Tsarist army, coming from Bessarabia. However, the Romanian prisoners in the Austro-Hungarian army will, as we shall see, form their own units and they will fight to bring their territories to Romania.

A special case in Romanian literature was Liviu Rebreanu’s novel Forest of the Hanged, in which we see not only the reaction to the death of the author’s brother Emil, who was executed for desertion for his attempt to pass into enemy territory at Ghimes Pass, but also the psychological drama of the young Transylvanian generation during the war. It was forced to choose between their oaths to the emperor or to fight for the unification of their territories with Romania.

An important statistic regarding the participation of Romanians from the Austro-Hungarian Empire in the First World War appears in Sibiu in 1922. We are talking about The Romanians sacrifices from Transylvania, Banat, Crisana, Satmar and Maramures in the World War by Teodor V. Pacatian, in which we find data regarding 22 counties, with 40 urban communes and 4,183 rural communes.

The work was started, according to the author, during the war, in 1915, and was meant to highlight, in the case of a victory of Austro-Hungary, that the Romanians did their duty to the emperor and that, in this context, a number of new national rights are not only deserved but required. Subsequently, questionnaires were prepared by the Romanian Association in Sibiu, intended for Greek Catholic and Orthodox priests in each of the Romanian settlements in the Empire. In 1921, after the war, the Association assembles again in Cluj. Under the Romanian administration, the data will be gathered with the help of county prefects and sub-prefects, who asked mayors from the villages and towns of their respective counties to draw up the local situation. In addition, a short report on inter-ethnic clashes in the autumn of 1918 was also requested.

One of the most well-known authors of the inter-war period who treated this painful matter was Octavian Talauanu. He describes his experience of World War I in three volumes. The first is about his participation in the war alongside the Austro-Hungarian Army, within the 23 Glotasi Regiment, belonging to the Honved or the national army of Hungary.

The authors statements about the beginning of the enlistment of the Romanian soldiers from Transylvania to go to the front are significant: “At this time, our attention was directed to Romania. We were waiting for a sign of hope, as the blind face waits for a ray of light. The news came about the Crown Council’s decision declaring Romania’s neutrality. We felt like a herd without a shepherd, which was to be directed any day now to the field of slaughter. All our plans collapsed like children-built fortresses, our soul darkened and our hearts bled. The Carpathians were close and it was not difficult to cross the border. This tempted our thoughts, but we could not leave Transylvania, to leave thousands of Romanians in the hands of strangers, only to save our own skins. We were tempted by the idea that the whole battalion should pass over the mountains, but the peasants seeing that Romania wont budge they wouldn’t have left their households, wives and children, to the revenge of the Hungarian state.”

However, among intellectuals, we find a most confusing situation, provoked by the belief that Romania will enter into war on the part of the Central Powers to get Bessarabia. It should be noted that at the beginning, among the military songs of the Romanian formations, the present national anthem, “Awaken thee, Romanian!” could be found, as Romanians were viewed as future allies against Russia.

Also, for Romanian career officers, their loyalty to the Austro-Hungarian was unquestionable, as they made an oath to the emperor Franz Joseph. Thus, we can observe the attitude of Petre Nemoianu who, at the beginning of the war, declares: “Between the national feeling and the love for the throne I will choose the second.”

He will, however, end up fighting in the Romanian Army in 1917. The Romanian National Party in Transylvania appealed, with the help of the Orthodox and Greek Catholic Churches, to the soldiers to do their duty for the country and emperor.

Romanian National Party leader Teodor Mihali publishes a call, “For the sons of the Romanian nation!”. Following this, Octavian Goga and Vasile Lucaciu cross the border in the Old Kingdom. Coming here, King Carol I intervenes, urging them to remain loyal to Emperor Franz Joseph.

“We fought, then, the Transylvanians and the Bukovinians against the Bessarabians”

Mobilization of the 2nd Austro-Hungarian Army took longer than the Central Powers expected, and the German 8th Army was forced to fight against two Russian armies, being permanently in danger of being encircled. After the regiments of the 2nd Army reached the Dniester line, on August 30 – September 1, the troops begin to be thrown into battle one after the other, so that each battalion, as it arrived in Galicia, was thrown into the fire, and the soldiers attacking the line of machine gunners were very easily cut down by the Russians.

The sight seen by the soldiers of Octavian Tuslauanu’s regiment were the stuff of nightmares, and the morale diminished every day: “The crippled that marched before us, the roar of battle all around us, the news that we were beaten, the debacle of the Halici withdrawal totally demoralized us before we even faced the enemy. It was said that our men, unable to carry all the food from the warehouses, blew it up. Only the price of the flour rose to over half a million crowns. The railroad and the beautiful bridge over the Dniester were destroyed […] You could see only fresh tombs with small crosses from the branches, Russian weapons destroyed, heaps of ammunition and dead bodies. ”

Occupying Lemberg, reaching the San River and encircling the Przemysl fortress, the Russian army took possession of Galicia and cut off the southern withdrawal routes of the Austro-Hungarian army.

On September 11, Octavian Tuslauanu’s regiment were attacked by the Russians in the Dimitrize area, attack that was made with soldiers from Bessarabia: “There were many Bessarabians among the Russians, according to prisoners. So, we fought, the Transylvanians and the Bukovinians against the Bessarabians. I cursed the forest and the fate that made brothers kill brothers!”

Beginning with September 16th, the 2nd Austrian-Hungarian Army suffered a defeat in front of Sambor and most of the regiments that defended the city were made up of Romanians: “From Halici onwards we have met only Romanians, Transylvania has moved into Galicia.”

The military formations made up of Romanian prisoners

The year of 1916 represented a crucial moment for the Romanian military in the Austro-Hungarian army, the death of Emperor Franz Joseph and Romania’s entry into war, causing a considerable increase in the number of deserters.

In 1917, the Romanian government began gathering a number of Romanian prisoners from the Austro-Hungarian army at the Darnita camp (Ukraine). They received here new instructions from a Romanian military mission headed by Colonel Pietraru. The number of those who joined these formations was about 15,000-20,000 people.

The departure of the first volunteer transport took place on June 15 in Kiev under the assistance of some Romanian personalities from Bessarabia, such as D. Hallip, Captain Popovici and C. Florian. Prior to arriving in the country, the train was received with great pomp in Chisinau. On June 8, the train arrived at the railway station in Iasi and was met by a number of personalities, including Vintila Bratianu, general Prezan and general Nicolae Petala. The Transylvanian soldiers participated afterwards in the battles of Marasti, Marasesti and Oituz.

Octavian C. Taslauanu, Three Months on the Field of War (The Newspaper of a Romanian Officer in the Austro-Hungarian Army), Bucharest, 1915