How the Treaty of Versailles ended WWI and started WWII 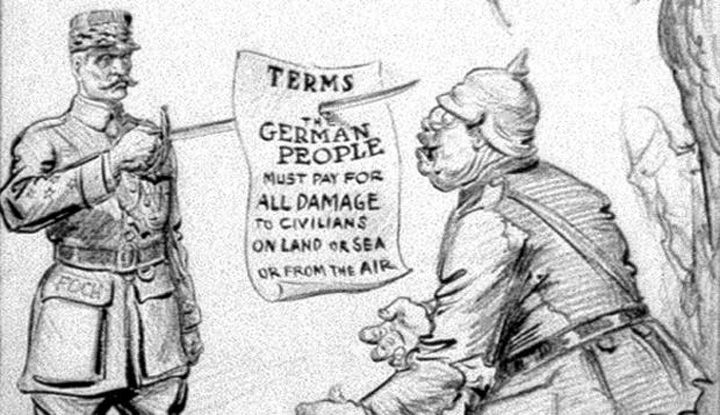 European countries dealt a harsh punishment to Germany for its role in the First World War—a move that would soon come back to haunt the world.

On June 28, 1919, on the outskirts of Paris, European dignitaries crowded into the Palace of Versailles to sign one of history’s most hated treaties. Known as the Treaty of Versailles, it formally ended World War I—and at the same time laid the foundation for the Second World War. Though it was preceded by a peace conference that lasted over a year, the treaty was disliked by every nation that signed it.

Over 65 million people had fought in World War I, and more than 8.5 million military members and at least 6.6 million civilians died. The war decimated farmland, towns, and battlefields around Europe. And according to many, Germany was to blame. Though contemporary historians are still split on who should be held responsible for World War I, the treaty blamed and punished Germany.

From idealism to punishment

During World War I, President Woodrow Wilson had proposed the Fourteen Points, a blueprint for world peace that included establishing an association of nations to ensure European security and prevent nations’ abilities to enter into secretive mutual protection treaties. Much of that idealistic plan was scuttled during negotiations when the other Allied nations shifted their priorities toward reparations.

The treaty itself was predicated on Germany’s guilt for the war. The document stripped Germany of 13 percent of its territory and one tenth of its population. The Rhineland was occupied and demilitarized, and German colonies were taken over by the new League of Nations. The German army was diminished to 100,000 men and the country was forbidden to draft soldiers. Its weapons were largely confiscated, and its navy stripped of large vessels. Germany was forced to put Wilhelm II, its emperor, on trial for war crimes. And the treaty required Germany to pay 269 billion gold marks—the equivalent of $37 billion.

European leaders signed the treaty in the Palace of Versailles’ Hall of Mirrors—the very place where the German Empire had been created, and Wilhelm II’s father made emperor, in 1871. It was a slap in the face to Germany, whose residents saw the famous “war guilt” clause as a humiliation. (The United States did not ratify the treaty due to political division between Democrats and Republicans.)

Though there was a real desire for peace in the wake of the disastrous war, the treaty did not achieve its intended effects. Furious at what they saw as a harsh “diktat” (a dictated peace), right-wing German politicians used the treaty as a nationalist rallying point. The staggering reparations payments reduced the country’s industrial output, and other forces thrust Germany into hyperinflation in the 1920s, which played into the economic instability of the Great Depression.

European leaders were dissatisfied with the redrawn map of Europe and the concessions they each had made in the name of an uneasy peace, with some disappointed that Germany hadn’t been treated even more harshly.