How to restore the morale of an army that has suffered great defeat? 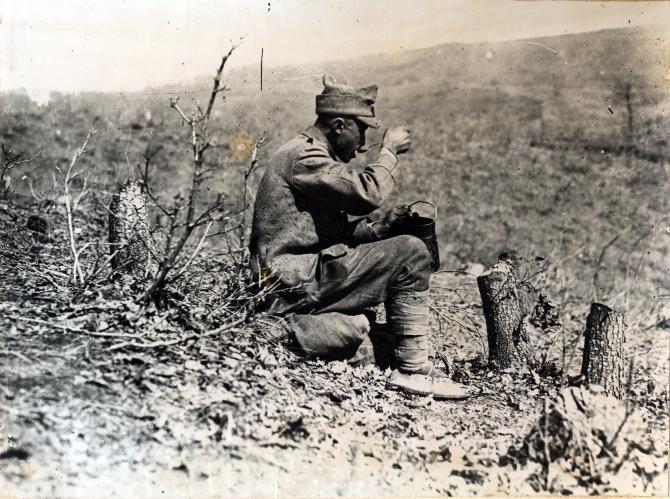 Soundly beaten in the fall of 1916, the Romanian army was preparing to take its revenge in the summer of 1917. The objectives were numerous, but they were all subsumed to one all-encompassing goal: saving the Romanian state from certain destruction, regaining as many lost territories as possible, while also building up the confidence of the army. All this could only be done after the morale of the Romanian soldiers was restored. In the first part of 1917, political, military and cultural personalities made it their mission to help restore the morale of the Romanian soldier.

Romania also had to cope with the unexpected. The abdication of Tsar Nicholas II, the spread of Bolshevik ideals and the agitation of Bolshevik elements in Romania threatened the cohesion of the Romanian army. In order to strengthen the morale and the cohesion of the Romanian soldiers, King Ferdinand, during an inspection of the Romanian Second Army in the spring of 1917, held a speech to the Romanian soldiers: “To you, sons of farmers, who defended with your bare hands the land where you were born, where you grew up, I, your king, am telling you that besides the great reward of your victory, that ensures the gratitude of our entire nation, you have also gained the right to master the land you have fought for. You will be given land. I, your king, will be the first to give an example. You will also be given broad participation in the affairs of the state”. The king’s promise brought renewed hope into the hearts and minds of the troops. It did not only give them a goal to fight for, but also the concrete possibility of achieving this goal, as they could now measure up with the enemy in terms of arms and ammunition.The reputed Romanian historian Florin Constantiniu writes that “the king’s speech had an extraordinary effect in strengthening and amplifying the motivation of peasant soldiers to continue fighting. For them, the end of the war meant, first of all, that they will be given land. This is what explains the resilience of the « home front»- the absence of any unrest among the population and the army- as well as the immunity it showed in face of communist propaganda, propagated by Russian soldiers won over by Lenin’s ideas”.

A common effort to restore morale

Personalities of Romanian literature such as Mihail Sadoveanu, Octavian Goga, Barbu Delavrancea, Radu Rosetti, etc. regularly wrote for the newspaper “România”, founded by the Romanian Great General Headquarters, meant to strengthen morale. Another example is that of George Enescu, the great composer and rhapsode, who sang for the wounded in military hospitals.

Military commanders also joined in the effort to improve morale. For example, officer Radu Rosetti used “two measures that weren’t in military textbooks: music and cigarettes […] I made musicians perform for the regiment and they sang love songs in the alleys and in open spaces and even dancing”. A French officer of the French Military Mission would note: “It is easy enough to influence the soldier’s morale: a whistle, a violin, and the dance can begin. Every night in the reserve battalion we have music and dancing”.

Queen Marie of Romania also joined in the effort. She would tirelessly visit hospitals and encourage the sick and console the dying. Her embodiment as the “Mother of the Wounded” was highly appreciated. The politician and writer Constantin Argetoianu described her in these words: “… the war wrote its own page of history, the page with which to boast, the page that will be placed in history in a place of honour. We find it in the trenches, among the combatants, in the frontlines; we find it in hospitals and in all sanitary posts; among the wounded, among the sick; we find it in all the meetings that had tried to do a little good. It did not know the fear of bullets and bombs, as it did not know the fear and the misery of the plague, or the impatience with the often-useless efforts that desired for the better. Queen Marie fulfilled her duty on all the fronts of her multiple activities, but above all that there was the encouragement and moral uplifting of those who were around her that would ultimately decide, in the most tragic moments, the fate of the country and of the nation. It can be said that during our time in Moldavia, Queen Marie beautifully embodied the highest aspirations of the Romanian conscience […] she was one of the founders of a united Romania and was one of the greatest figures of our national history”.