John Norton-Griffiths, the Englishman who destroyed the Romanian oil refineries and reserves 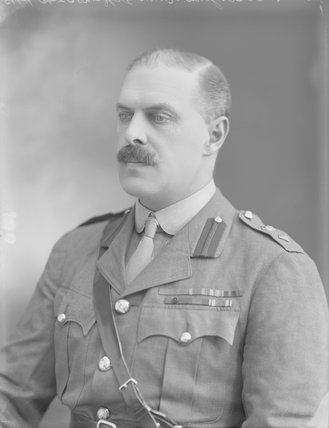 The end of 1916 found Romania in an extremely difficult situation. After a series of painful defeats at the hands of the Central Powers, the Romanian Government had to abandon Bucharest and withdraw to Iași. In addition to the capital of the country, it had to abandon much of its national territory and with it many economic resources crucial to the war effort, mainly oil wells and refineries. In these dire circumstances, a plan was set in motion by the British Government: Lieutenant-Colonel John Norton-Griffiths (1871-1930) received the mission to destroy the Romanian oil refineries, reserves and grain stores to prevent the fall of these vital resources into German hands.

Romania entered the Great War in August 1916, with the upmost enthusiasm and confidence that it will succeed in the realization of the national ideal: the unification with Transylvania, that was at that time under Austro-Hungarian rule. But neither the heroism of soldiers, the press supported propaganda or fiery speeches given by politicians and generals could not hide the reality that the Romanian army was unprepared for war and was not supplied with proper weapons and equipment. Even though they achieved several small successes in Transylvania, the Romanian Front collapsed under the pressure of the German, Bulgarian and Austro-Hungarian troops. In this context, the Romanian Government was forced to make some extremely painful decisions: withdrawing to Moldavia, sending the Treasure of the National Bank of Romania to Moscow, and accepting the English plan to destroy the country’s most important industrial capabilities.

The British government discussed the need for the destruction of Romanian oil and grain on October 31, 1916. General George Macdonogh, head of MI7b of British Military Intelligence, proposed sending Lieutenant-Colonel John Norton-Griffiths to lead the operations of destroying the Romanian oil refineries, reserves and wheat stores. Norton-Griffiths was a very competent engineer, specialized in the construction of tunnels, mine galleries, railways, and civil and industrial buildings.

A man with a mission: Lieutenant-Colonel John Norton-Griffiths

Macdonogh and Griffiths met on November 4. Learning the general’s plan, Griffiths asked, “But what regiments do I take, sir?” The answer was unequivocal: “You will go alone!” Immediately after receiving this assignment, Griffiths went to Norway. From here, through Sweden and Finland, he reached Saint Petersburg, where he took the train to Bucharest. He arrived in the capital of Romania on November 18. Two days later, Sir George Barclay, the ambassador of England in Bucharest, asked the Romanian Government to authorize the destruction of refineries, oil wells and reserves, promising that the Allies would provide compensation at the end of the war.

The Norton-Griffiths report, written in Iași and dated January 22, 1917, described the destruction of Romanian oil fields and it was declassified in 2010 and published online. The document extensively describes his mission in Romania and the destruction of the refineries in Târgovişte, Răzvad, Moreni, Filipesti, Ploieşti, Băicoi, Câmpina, Buştenari, Arbănaşi, Berca, Buzău, Gura Ocniţei, Ţintea and Monteoru.

Although Romanians have accepted the English plan and have lent Norton-Griffiths their support, a joint Franco-Romanian commission was created at the same time, in which he was also co-opted, the purpose of which was to oversee the destruction of oil manufacturing capabilities. In fact, this committee tried its best to stall for time, hoping in the improvement of the situation on the front. Conscious of this, the Englishman did not expect a hypothetical halt of the German advance but went to Ploieşti where he contacted the British engineers working in the Romanian oil industry to join his mission.

Norton-Griffiths formed a team that he split in two: a group led by him dealt with the destruction of refineries and oil fields, and another group led by Captain J. Pitt dealt with the destruction of grain stores and of machines and equipment that could have been used by the Germans. In his mission, Griffiths was assisted by British colonel Christopher Thomson (1875-1930), an attaché of the British Legation in Bucharest.

The next day, on November 26, he went to Târgovişte, where, among other things, he met the representatives of the government commission that was tasked with deciding how oil installations would to be destroyed. The Commission wanted to destroy only oil deposits, not refineries, relying on the fact that at one point the Romanian army would recover the area. Griffiths insisted that it was a mistake and sent a telegram to General Dumitru Iliescu, in which he stressed the need for total destruction of the refineries in Târgovişte but did not receive any clear answer. Both Griffiths and Colonel Thomson held talks with the French side to intervene so that the Romanian authorities would agree to the destruction process. Such a conversation with Thomson is reported by General Berthelot in his memoirs.

In the absence of an order by the Romanians to authorize the dismantling of refineries, Griffiths began the preparation of the operation, helped by seven British officers, a French officer, a Romanian, Prince Valentin George Bibescu and a number of Romanian engineers. The whole action took place in an obviously hostile atmosphere, especially from the locals.

The operation was started by burning down the refineries in Târgovişte on 26 and 27 November. On November 28, the refineries at Moreni were burned. The destruction of the Steaua Română refinery in Câmpina was made difficult by the fact that it was adjacent to the inhabited part of ​​the city. The fire started on December 5, practically simultaneously with the entrance of the German troops into the city. In Ploiești, preparations for the operation began on December 3, with the permission of General Alexandru Averescu. The destruction of the 13 refineries in the Ploiești area began on December 5 and 6.

Norton-Griffiths Griffiths mentioned in his report the names of the refineries and the amount of oil destroyed. His figures show that almost half of the total oil was destroyed in Ploiești: 398,500 tons. The result of this operation was perhaps the largest ecological disaster on Romanian territory. The catastrophe is difficult to quantify in the absence of modern measurements, but the contemporary witnesses were terrified, comparing the event with a true apocalypse. Priest Constantin Hodoroabă, eye witness of the event, noted in his diary:

“We go to Ploiesti… we see huge flames rising from the burning of the great oil deposits. The sight grows even more terrible the closer we come to Ploiești. Flocks of ravens fly hurriedly away from the city. Giant clouds of black smoke twist and bend like nervous dragons, as monsters from stories, that darken the horizon. Like heavenly lightning, like tongues of fire, the flames are rising to hundreds of meters high… the city is surrounded by this blazing girdle that seems like a giant volcano during an eruption raging with lava and tongues of fire into the sky. There’s a suffocating stench, of gas and pitch… The sight is so horrible and terrible that it cannot be described. That’s something I never could have imagined. It is like the burning of the Biblical cities of Sodom and Gomorrah, over which God has brought down fire from heaven… You have the impression that the world is over, that the earth is dying. It’s an apocalyptic view, pure and simple. From time to time, you can hear blasts that are louder than any shell that I’ve heard exploding, a thunder so great that the earth shakes underfoot…”.

Norton-Griffiths and his team filled in 1,500 wells with debris and burned another 1,000. 70 refineries were destroyed in the counties of Prahova, Dâmboviţa and Buzău, and the quantity of oil and petroleum derivatives was estimated at 830,000 tons. In January 1917, in a letter to his wife, Griffiths noted that they had worked day and night in the terrible hell of explosions, smoke and gas. The fires, in addition to massive material damage, has led to human casualties. Even Griffiths nearly lost his life at Moreni.

On December 10, Griffiths was in Brăila, where he destroyed the grain silos so as to not fall into German hands, then in January he was in Iași, where he was received by the Royal Family and was decorated by King Ferdinand with the “Star of Romania” medal.

The consequences of the mission

For several months, Germany had no access to Romanian oil. The Steaua Română refinery in Câmpina started functioning in February 1917. During 1917, the amount of oil used by the Germans amounted to 461,491 tons, just over half of the amount destroyed by Griffiths’ action.

The refineries and oil wells destroyed at the end of 1916 represented an important objective to the German emperor Wilhelm II in his visit in occupied Romania in September of the following year. The Kaiser came to see with his own eyes the destruction “provoked by the English”, according to the Germanophile press in Bucharest, who reported on the visit. After one year, the damages caused by this sabotage were still visible.

On September 23, 1917, “the emperor left from Ploieşti to Câmpina, where the English detachments in charge of the destruction of the petroleum fields […] have in the past caused such terrible ravage. The land, simmering with flames, covered by clouds of smoke […] last year, is now no longer recognizable. German diligence and tenacity have managed so far in healing many of the wounds. In other places they are just now starting to undo the heavy damage done to the country by the English Allies. […] The emperor also visited the collection of iron debris, bailing spoons, stones, and bricks, which German engineers managed to remove out of the wells plugged by the English with ill will”.

Ion Cristoiu, Vizita împăratului Germaniei, Wilhelm al II-lea, în România ocupată [The visit of the Emperor of Germany, Wilhelm II, to occupied in Romania], in the “Historia” magazine, no. 189, October 2017.