Liberation of Balkans and new rivalries between the Allies 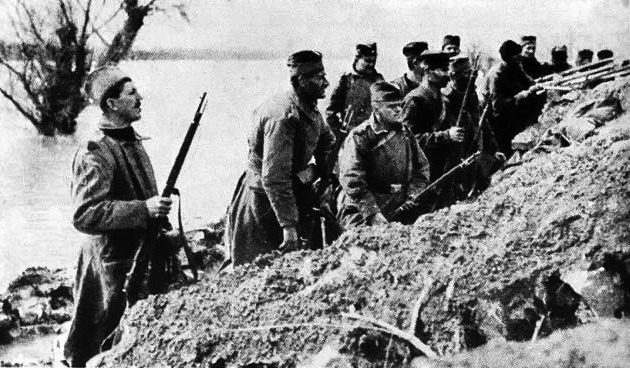 The story of kingdom of Serbia is fabulous. After a series of remarkable successes against Austria-Hungary in 1914, Serbia was ultimately defeated during the autumn of 1915 by German, Bulgarian and Austro-Hungarian forces. The entire country was occupied, but remnants of the Serbian army succeeded in reaching the Adriatic harbours of Albania, from where they were evacuated by the Allied powers.

Albania was also occupied by the Central Powers, as was Montenegro after a short campaign in January 1916. These events prompted France and Britain to transfer troops from the Gallipoli Campaign to Greek Macedonia. The Macedonian Front was thus established in an effort to support the Serbian army to reconquer Vardar Macedonia.

Despite several Allied offensives, the Macedonian Front remained more or less fixed until September 1918, when the Vardar Offensive succeeded in piercing the enemy lines at the Battle of Dobro Pole on 15 September 1918. This was actually the beginning of the war’s end.

As Bulgaria did not have the forces to conduct a defense in depth, the Allies advanced quickly into Vardar Macedonia. On 29 September, Skopje (was taken, and on the same day Bulgaria capitulated.

This meant the total collapse in the Balkans for the Central Powers, as Bulgarian soldiers formed the overwhelming part of their forces there. The only units left were the German 11th Army, which also contained an important number of Bulgarian soldiers who decided to side with the Allies, and the Austrian-Hungarian XIX Corps in Albania. They had no option but to withdraw to the north, pursued by the Allies. Especially the Serbians were highly motivated to liberate their country and take revenge for their crushing defeat in the winter of 1915.

Liberation of Serbia, Albania and Montenegro

In the center, the 1st Serbian Army under Petar Bojovic and parts of the French Armée d’Orient under Paul Prosper Henrys marched straight towards Belgrade. The Germans tried to block the advance at Niš, but to no avail. Vranje was liberated on 5 October, Niš on 11 October and Belgrade by the Serbian Army on 1 November 1918. Here, the Serbian Army halted their advance, because further north, Austrian-Hungarian authority had already evaporated and the State of Slovenes, Croats and Serbs had officially been proclaimed on 29 October 1918.

The 2nd Serbian Army under Stepa Stepanovic, together with French troops headed towards Kosovo. Pristina was liberated by the 11th French colonial division on 10 October, and Peć on 17 October. By 3 November, the border with Bosnia was reached.

Colonel Dragutin Milutinović was appointed at the head of a Serbian force, named the Scutari troops to liberate Montenegro. But when he advanced into Montenegro, he found the country already freed by Montenegrin paramilitary forces. The Serbians under Milutinović arrived in Podgorica on October 31, and after a last skirmish, the Austrian-Hungarian occupation force also evacuated Cetinje and the rest of the country on November 4th

In Albania, the Austrian-Hungarian XIX Corps under Karl von Pflanzer-Baltin had no choice but to withdraw to the north, to avoid being surrounded by the advancing French and Serbians on their left flank. Furthermore, evacuation over sea had become impossible after the Allied bombing of Durrës on 2 October. The Italian 16th Army corps (CSIO) supported by the French 57th division advanced from the south. They conquered Berat on 1 October, Durrës on 16 October, and finally Shkodër on 30 October. From the east the French 11th colonial division, 30th infantry division, Italian 35th infantry division and Greek 3rd and 4th infantry division crossed into Albania and took Elbasan on 8 October. The Austrian-Hungarian XIX Corps withdrew to Kotor where they laid down their arms after the Armistice on 3 November.

After the capitulation of Bulgaria, three French, one Greek and one British, the 26th Division, together called the Army of the Danube (AD) under command of Henri Mathias Berthelot, marched through Bulgaria towards the Romanian border. By the end of October, they had reached Ruse, Pleven and Veliko Tarnovo. This encouraged Romania to reenter the war on 10 November 1918. On that day Allied troops also crossed the Danube at Svishtov and Nikopol.

When the Bulgarians laid down their arms on the Struma front, there were no more major Central forces left to prevent the Allies from marching towards Istanbul. British, Greek and French troops advanced and reached Makri, Evros, at some 30 km from the Turkish border, on 28 October. The Ottoman Empire capitulated two days later.

New rivalries between the Allies

With the collapse of Bulgaria, Turkey and Austria-Hungary, old and new rivalries between the Allies re-emerged. Italy wanted full control over Albania and had for that reason opposed any participation of the Serbian Army in the liberation of Albania. Italy and Serbia also clashed in what became known as the Adriatic Question. In Montenegro a civil war broke out between supporters of independence supported by Italy (Greens) and supporters of a union with Serbia (Whites). Serbia and Romania disputed each other’s influence in the Banat region, which even led France to interpose some of its troops between the Serbian and Romanian Armies until the border was fixed on 10 September 1919 in the Treaty of Saint-Germain-en-Laye.