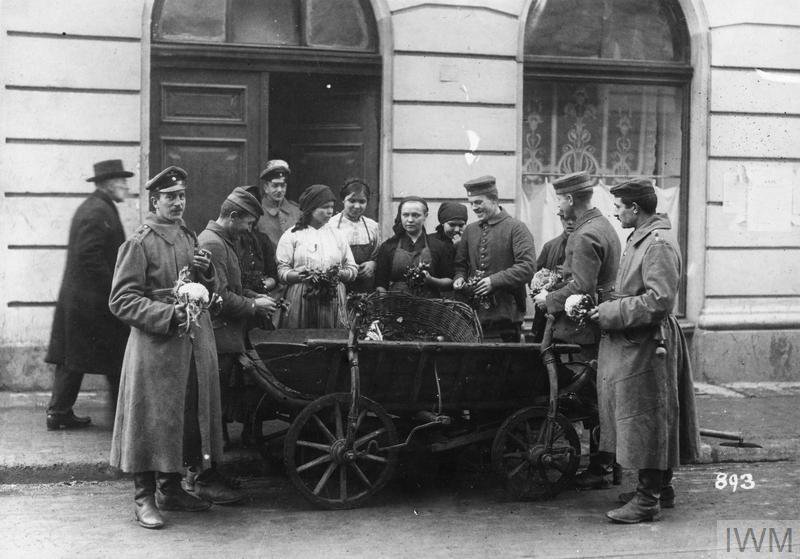 Published in 1930, the journal of Gerhard Velburg (most likely a pseudonym used by Bogislav Tilka, a German author of several international law manuals and a two-volume monography on the German occupation of Romania during the First World War) offers a unique perspective on occupied Romania and on the lives of German soldiers behind the front line.

According to his testimony, Velburg did not take part in the fighting of the Romanian Front, but was sent to Romania a few days after the conclusion of the Battle for Bucharest, in December 1916. Arriving in the occupied Romanian capital, he discovered a surprisingly rich city, before being sent to a village on the Borcea Arm of the Danube. Here, Velburg spent most of his time while in Romania, before returning for several months to Bucharest. From there he was sent to the Western Front.

After a week spent in Bucharest, where he also celebrated the Christmas of 1916, along with other German and Austro-Hungarian soldiers, the reservist battalion of which Velburg was a member went to Fetești, which at that time was a slightly larger village, located on the Borcea Arm of the Danube.

On January 3, 1917, “at eight o’clock we found ourselves before our new homeland. We arrived at the Danube, where the long bridge to Dobrogea begins. At our feet is the small arm of the Danube, the Borcea Arm. It is five hundred meters wide. The bridge here was blown up”.

The German battalion had the task of controlling the crossing of the river and the surrounding territory. Velburg spent most of his stay in Romania here, isolated from the turmoil of the war, enjoying a rare abundance:

“We bought from the slaughterhouse beef with thirty-seven pfennigs and pork with sixty pfennigs a pound. A whole pig’s head costs eighty pfennigs. In this cup of joy there is however one regret, namely that we can only send to our loved ones back home only a small bit of this bounty. […] The bellies that had become soft in Germany have now gained a tense roundness. Many of our comrades probably have not had in their entire lives a meal as good as the ones of the last few weeks” (January 19, 1917).

Velburg had two main duties, guarding the ferry that provided transportation over the Danube and working for the local registry office. In exceptional cases, he was summoned to clear the snow off the railway that led to Bucharest. On March 21, 1917, the German soldier noted in his diary:

“I’m assigned to guard the ferry again. Endless is the line of carts with refugees who want to cross to the other side, endlessly is the grief that accompanies them: hunger, poverty, disease. […] Only two carts and four cattle can fit on those miserable ferries. Because of the wind and the strong waves, loading, unloading and returning the ferry to the other bank takes one hour. The line of carts grows continuously. There are families waiting for three weeks to pass”.

The days of the German soldiers behind the front were passing monotonously, detached from the history unfolding all around them. Velburg notes the usual disagreements he had with his obtuse superiors and the strained relations the Germans had with their Bulgarian allies. However, history reached Fetești, on October 14, 1917, when Kaiser Wilhelm II of Germany passed through the village, during his visit to occupied Romania:

“[…] a man whose steps make the world tremble was in Fetești. When the Japanese Mikado passes the street, all the windows on the first floor must be closed, so that no ordinary man can look upon him from above. Because in Fetești there are no houses on the first floor, the locals were strictly forbidden to go out on the street during the day when the man that I’m about to talk about to you passed, for several minutes, through the village. This man was Emperor Wilhelm. His arrival had been announced for the morning. All the soldiers in the garrison and the pencil pushers of the registry office had to form, all day long, an unbroken and impeccable line on the road that connects the motorboat station to the railway. But His Majesty appeared only at 7 o’clock in the evening. Thus, about two thousand people were taken away, for a whole day, from their activities: the troops stood upright until their feet went numb, and the peasants had to lounge in their homes.

At the end of November 1917, Velburg was moved to Bucharest, where he worked at the central records office, organized by the German army. In the capital of occupied Romania he lived through the tensions of the negotiations that ultimately led to the conclusion of the peace treaty between Romania and the Central Powers, on May 7, 1918. By the end of that month, Velburg learned that he will be sent to the Western Front, where he arrived after an extremely difficult journey, which lasted two weeks. Here, he found a reality very different from the one left behind in Romania: misery, hunger, disease and open hostility from the locals.