Marshal Averescu and Queen Marie, visiting the front.” I felt, more than ever, how ardently I love this country!” 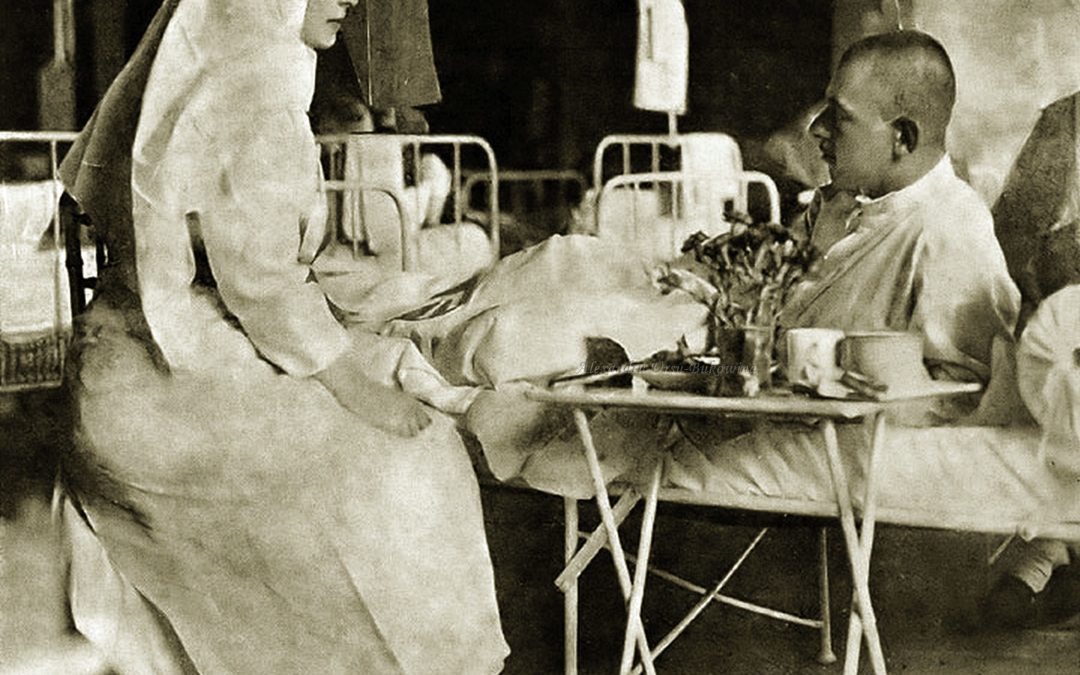 During the war, Queen Marie was of real help not only in hospitals or as a strategist in the political discussions of the time, but also as a moral support for the troops. She often went to the front and encouraged the soldiers in difficult moments, especially when the Romanian army was abandoned by its main ally, the Russians. During these visits when she was accompanied by Marshal Alexandru Averescu, she discussed with generals the strategies and tactics that were used, she offered decorations and medals to the soldiers, but the most important thing was that the soldiers received these personal encouragements from the queen herself.

[. . .] I left at half past nine for the hospitals and I worked tirelessly until half past twelve, when I quickly had lunch, and then I took off running, in some riding clothes that I managed to improvise on the spot, because Averescu had invited me to make a visit to the front. I got into the car with Eliza Suțu and Ballif and went to Onești, on a beautiful, but awfully bad road, over hills with thick forests in places, with beautiful sights at every turn. We arrived at Oneşti on time, at four o’clock, as we arranged. Guns could be heard from the hills. Averescu greeted us there and we went nearer to the hills. The women in the villages were very happy to see me passing by.

Averescu took us to a hill in front of the position occupied by our Romanians and by the Boche, from where we could see Târgu Ocna, the city that the enemy tries to take and which is constantly bombed. I went by car as far as I could, then I climbed onto a saddle and rode to the top of the hill. The panorama was wonderful, all our positions were stretched at our feet, amazingly close. There was no intense fighting going on right then, just sporadic cannonades on both sides. General Văitoianu joined us, who, together with Averescu, explained the positions and what they hoped to achieve- they have plenty of hope! The heat was great, but the view was really charming, and I was deeply moved by the closeness to the places where my brave soldiers were giving their lives, building a grand barrier between the places that still belong to us and the invading enemy; I felt, more than ever, how ardently I love this country!

After carefully looking over the details of our positions and explaining me the manoeuvres the generals hope to make, I left that hill and went down to the place where a company of «Mountain Hunters» was gathered while waiting for their decorations for bravery in battle. Averescu asked me to hand over the decorations he was entitled to give. I did it with pleasure- my darling brave soldiers! With head caps and sunburned faces, it was a pleasure to look at them, for they smiled at me one after another with great joy, telling me where they came from- they called out the name of a dear place, and you could see it in our eyes that we understood we shared the same longing- the desire for places that are no longer ours; and yet, lately, we felt a new hope being born in us, thanks to the courage of our army, which defends with so much heroism as much as we have left to defend.

It was an emotionally charged hour, in which I deeply felt the love that now binds us so tightly. The surroundings were gorgeous, the blue skies, the meadows sprinkled with countless flowers, and the thundering of guns rolled up to us from the remote mountains.”

“14. VIII. Since yesterday I was in the area of the 4th Army Corps, where I made a small reconnoitre with General Văitoianu. Prime Minister Brătianu came here, accompanied by Minister Constantinescu Alexandru. […] In the afternoon, at about four o’clock, Her Majesty the Queen arrived and we accompanied her on horseback to the Straja C.P., where I could show her the front. Then we went to the detachment of the Mountain Hunting Battalion, from which a few officers and soldiers were to be decorated for the bravery shown on the eve of battle. Her Majesty the Queen even personally placed the decorations on the soldiers’ chest. At seven o’clock we went by car with the Queen at Bucium, at the 1st Division, to have lunch with the officers of the division. After the meal we returned to the train, where we found the Prime Minister (that came unannounced). I left with the Royal train to Adjud. On the way I had a long and interesting conversation with the Queen. I returned by car to the train for Rădvana and sent from there to the General Headquarters the operation plan for the future action. […]

The papers in the envelope have a very interesting history, at least for me, and I think it is worth telling. Some time ago, being in the train with the Queen, I spoke more broadly about some of my personal issues. Among these, I told the Queen that I felt deeply offended by some suspicions, which were always far from my soul. The suspicions that I was very ambitious, that I had very high aspirations and that I had no scruples in accomplishing my aspirations.

Seeing that the Queen was obviously reluctant, I told her that in order to prove that this defamation had no merit, I would entrust her with an undated resignation, with the explicit statement that the resignation can be used when it will be considered fit. «Vous feriez celà? » the Queen asked me. «Mais certainement, Madame» I replied, and I sent her the next day the envelope through Colonel Ressel with the resignation and the promised statement.

This was the envelope that she returned to me as a birthday present.”