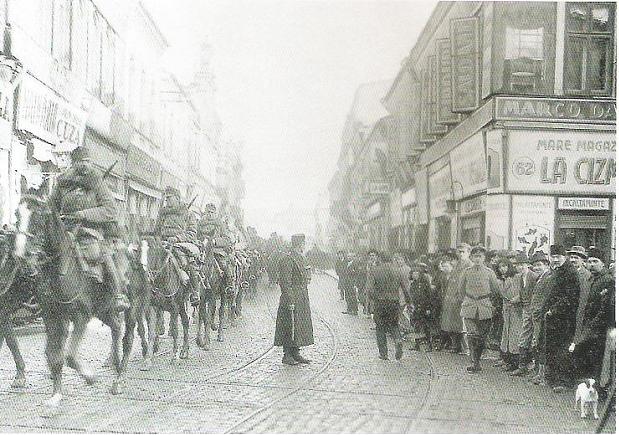 The process of squeezing Romania between the claws of the Teutonic machine is proceeding with notable rapidity. German troops have broken Romanian resistance in the valley of the lower Alt and apparently already have turned the supposedly strong line of defense across western Romania to which the Romanians had retreated.

The campaign against Romania is developing rapidly with a converging drive on Bucharest from three directions. The immediate threat to the capital seems to be greatest on the Southwest, where the invaders have approach to within less than 50 miles after Field Marshal von Mackensen forced the Danube at two points and effected a junction with the armies of General Falkenhayn, which are pressing rapidly eastward after having broken the Romanian resistance on the lower Alt.

Defending Bucharest appears increasingly critical. Only to the northwest of the capital does the Romanian line seemed to be holding at all firmly, and even here on the Argenchu River, although 80 miles distance from Bucharest, indications are that there is a weakening of the Romanian resistance in this direction. News dispatches have reported that the Romanian government and diplomatic officials are leaving Bucharest for Jassy, 200 miles northeast of the capital, near the Russian frontier.

The retreat of the Romanians, according to the Germans, is a precipitate one as indicated by the disorderly retirement of the Romanian forces along the entire Wallachian front. The Romanians have destroyed the railway from Tchernovoda to Bucharest and are burning all the villages and stores of food in the course of the retreat.

It is impossible to doubt that the deteriorating situation in Romania is viewed in the Allied capitals with the greatest misgivings. The question is being frankly asked whether the accession of Romania to the Allied cause has brought strength or weakness, whether Russia has rendered the assistance which might have been expected from her and whether the Allies might have shown more initiative in attacking from Saloniki; whether the collapse in Romania is due to any lack of unity of the allies plan or strategy, or whether it is due in large part to Romania’s hasty invasion of Transylvania.

On the western front, extremely bad weather has brought the great Somme battle to a hold. Attacks have been minimal, and mostly confined to artillery exchanges, however even they prove to be futile as a large number of shells failed to explode, instead, they buried themselves in the moist soil. Troops meanwhile are suffering from the wet and cold.

The Germans have charged the British with employing contingents of colonial troops, notably Australians, instead of their home forces in the first line, during what is alluded to as the “Battle for Practice”. The Germans declare that Australians and New Zealanders lost 40,000 men in the Somme fighting, three divisions having been completely wiped out. The Canadians after suffering heavy losses in the Ypres fighting in June were thrown into the Somme battle in September and have been in the front line on all the days of great attacks since September 9. Colonial troops also have been lavishly employed by the French. In total the losses of French and English forces now exceed more than 600,000.

There is a growing belief in Washington that Germany means to evade promises to this country and shortly begin upon a merciless campaign of submarine warfare on the commerce of her enemies. German officials believe that the only way Germany will be able to bring England to her knees is through the steady destruction of her food and ammunition supplies. “If England begins to feel the pinch of hunger her statesmen and people”, according to what is said to be German opinion, “will begin to look with favor upon peace negotiations, and such negotiations are what Germany wants.”

The submarine is the weapon Germany depends upon to do this job. Each succeeding foray of submarines upon shipping commerce is expected to grow in intensity, and eventually reach the point explanations are no longer to be accepted by the United States. By that time, though, Germany hopes to have frightened England and her allies into consideration of peace that will bring about terms at least as satisfactory to Germany as to the Allies.