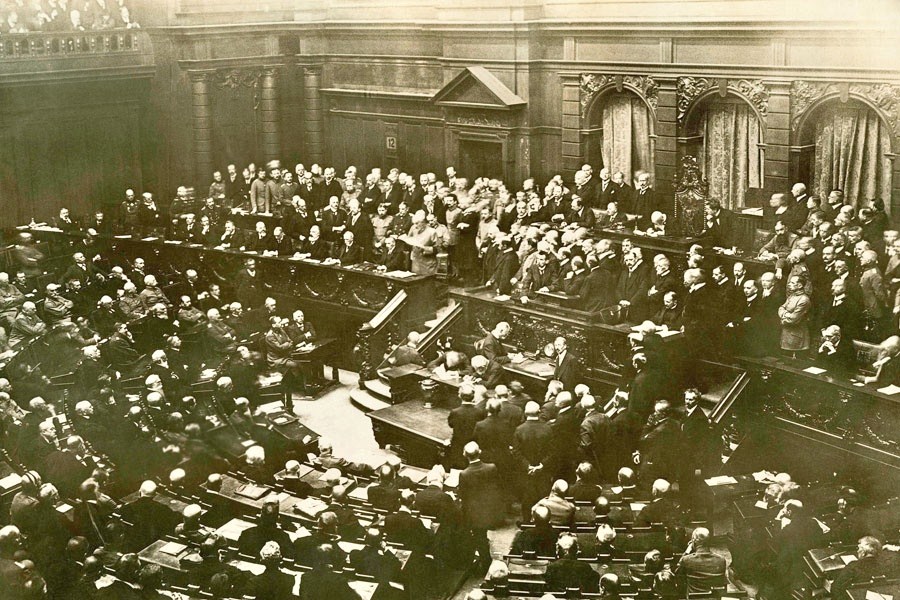 On Monday, the German Chancellor proposed peace negotiations. The German peace terms, in general, proposed the reestablishment of the status quo before the war with the exception of the establishment of independent Kingdoms of Poland and Lithuania. They are understood to propose the complete restoration of the occupied portions of Belgium and France in return for Germany’s captured colonies and to dispose of the Balkan situation, because it’s extremely complicated nature, in the peace conference.

In a speech before the German Reichstag, the German Chancellor said: “The situation was serious, but military operations progress, and that by strokes of the sword a firm foundations for our economic needs have been laid. Great stocks of grain, oil, and another goods fell into our hands with the capture of Romania. We could have lived on our own supplies, but now our safety is beyond question.”

“To these great events on land, the chance for continued military success of equal importance are added by our submarines. The specter of famine which are enemies intended to appear before us now pursues them without mercy.”

“The Empire it’s not a besieged fortress, as our adversaries imagine, but one gigantic and firmly disciplined camp with inexhaustible resources. That is the German Empire, which is firmly and faithfully united with his brothers in arms, who have been tested in battle under Austrian-Hungarian, Turkish, and Bulgarian flags.”

“Our strength however has not made our ears deaf to our responsibility before God, before our own nation and before humanity. His Majesty, therefore, in complete harmony with our allies, decided to propose to the hostile powers to enter into peace negotiations.”

The coming of winter and the lull in the fighting are given as reasons for making the peace proposal at this time. It is declared that the success of the German arms in Rumania should convince the Allied powers that the offer is not made because of any military weakness. By making the offer now, it is said, Germany feels that all sides may be saved the preparations for a spring campaign. Should the offer be declined, it is said it will be made again next Fall and if necessary the Fall after that.

Another of the objects of the peace proposal, German diplomats say, is to establish whether the Allies are willing to make peace, or whether it is their intention to crush Germany and dismember her. Germany, they say, is convinced of the ability and strength of her enemies to continue the war on its present or even greater scale for 10 years, if necessary, and is no less confident of her own ability to do so.

Among the Allied diplomats Germany’s offer was pronounced to be of double purpose an unlikely of acceptance. The first purpose, the Allied representatives declare is to affect the world opinion of neutrals and place upon the Allied powers the responsibility for continuing the war in the face of offers for peace. The second, they declare, is for the internal effect in Germany, to give evidence to the people that the government was ready to end the war, but was forced to continue by her enemies.

The piece offer, the Allied diplomats say, has been timed to follow the fall of Bucharest, to convince the German people that they should have confidence in the ability of their government to continue the war, if peace offers are declined.

Indications are that the various governments of the Allies do not intend to act hastily in making responses to the peace proposals of the Central Powers. The view expressed in London is that Germany would have the most to gain from an armistice owing to recent losses on the various fighting fronts. For that reason the prospect of an armistice it is not regarded with favor in London, and the suggestion is advanced in some quarters that one of the chief motives prompting the proposals was to gain time for Germany to reposition its forces from Romania back to the Western front.