Partitions of Poland – How ceased to exist a state! 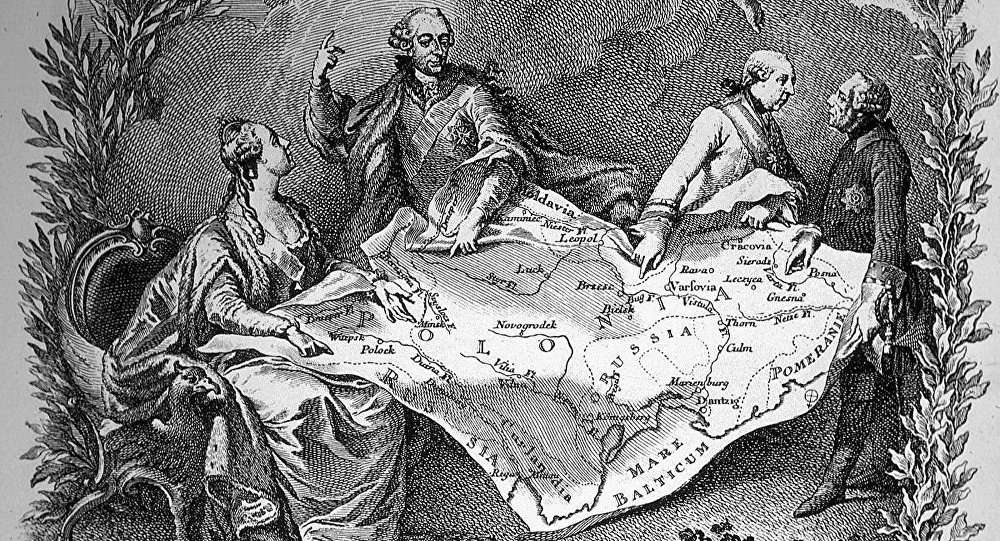 The First Partition occurred after Russia became involved in a war against the Ottoman Turks (1768) and won such impressive victories, particularly in the Danubian principalities, that Austria became alarmed and threatened to enter the war against Russia. Frederick II (the Great) of Prussia, however, in order to avoid an escalation of the Russo-Turkish War, determined to calm Austro-Russian relations by shifting the direction of Russia’s expansion from the Turkish provinces to Poland, which not only had a structurally weak government but also, since 1768, had been devastated by a civil war and by Russian intervention and was, therefore, incapable of resisting territorial seizures. 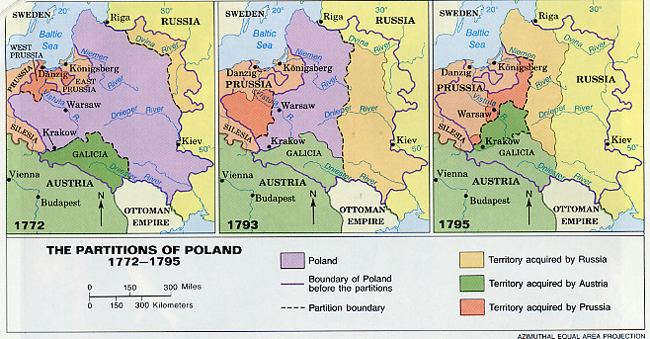 On August 5, 1772, Russia, Prussia and Austria signed a treaty that partitioned Poland. Ratified by the Polish Sejm (legislature) on September 30, 1773, the agreement deprived Poland of approximately half of its population and almost one-third (about 81,500 square miles [211,000 square km]) of its land area. Russia received all the Polish territory east of the line formed roughly by the Dvina and Dnieper rivers. Prussia gained the economically valuable province of Royal Prussia, excluding the cities of Gdańsk (Danzig) and Toruń, and also gained the northern portion of the region of Great Poland (Wielkopolska). Austria acquired the regions of Little Poland (Małopolska) south of the Vistula River, western Podolia, and the area that subsequently became known as Galicia.

Almost 20 years later Poland, which had made efforts to strengthen itself through internal reforms, adopted a new, liberal constitution (May 3, 1791). That action, however, resulted in the formation of the conservative Confederation of Targowica (May 14, 1792), which asked Russia to intervene to restore the former Polish constitution. Not only did Russia accept the confederates’ invitation, but Prussia also sent troops into Poland, and on January 23, 1793, the two powers agreed upon the Second Partition of Poland. Confirmed in August and September 1793 by the Polish Sejm—surrounded by Russian troops—the Second Partition transferred to Russia the major remnant of Lithuanian Belorussia and the western Ukraine, including Podolia and part of Volhynia, and allowed Prussia to absorb the cities of Gdańsk and Toruń as well as Great Poland and part of Mazovia. The Second Partition accounted for an area of about 115,000 square miles (300,000 square km).

In response to the Second Partition, the Polish officer Tadeusz Kościuszko led a national uprising (March–November 1794). Russia and Prussia intervened to suppress the insurgents, and on October 24, 1795, they concluded an agreement with Austria that divided the remnants of Poland (about 83,000 square miles [215,000 square km]) between themselves.

By the Third Partition of Poland, which was not finally settled until January 26, 1797, Russia incorporated Courland, all Lithuanian territory east of the Neman (Nieman) River, and the rest of the Volhynian Ukraine; Prussia acquired the remainder of Mazovia, including Warsaw, and a section of Lithuania west of the Neman; and Austria took the remaining section of Little Poland, from Kraków northeastward to the arc of the Northern Bug River.

Those territorial divisions were altered in 1807, when the emperor Napoleon of France created the duchy of Warsaw out of the central provinces of Prussian Poland, and in 1815, when the Congress of Vienna created the Congress Kingdom of Poland. However, the main result of the partitions— the elimination of the sovereign state of Poland—was in effect until after World War I, when the Polish republic was finally restored (November 11, 1918).