Peleș Castle, the summer residence of the Royal Family of Romania, occupied by the German troops 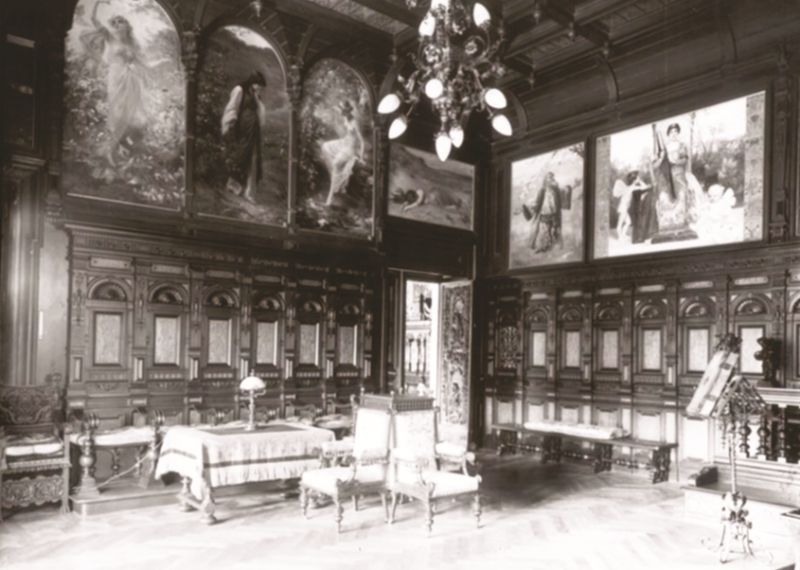 Built between 1873 and 1914 in Sinaia, in an extremely picturesque mountainous area, about 125 kilometres from Bucharest, Peleş Castle was used as a summer residence by the Royal Family of Romania until the end of 1947. During the First World War the castle went through some difficult moments as it was abandoned in a hurry in the wake of Romania’s disastrous 1916 campaign and occupied by German troops.

The history of the edifice, which became one of the symbols of Romania, began in 1873, when the ruling prince Carol (King Carol I from 1881) ordered the commencement of works on what would be known as Peles Castle. In that year, the site was cleared for construction and in 1875 the foundation stone was laid. The construction was done in several stages and was completed in 1914, even if the official inauguration took place on 7 October 1883. The plans of the royal residence were made by architects Wilhelm von Doderer, Johannes Schultz and Karel Liman. The castle stretches over an area of ​​3.200 square meters and is built in the style of German renaissance, but for the decoration of the 160 rooms different styles were chosen: Baroque, Rococo, Moorish, Turkish, Italian renaissance, etc. The central tower has a height of 66 meters.

Romania entered the war on the side of the Entente on August 14, 1916, after two years of neutrality. The royal family left Bucharest on the day of general mobilization. Queen Marie and the children of the royal couple headed for a palace at Buftea, near the capital, while King Ferdinand moved to Scroviştea in a pavilion built during the reign of Carol I, located closer to the Great General Headquarters. The Royal Family of Romania had not spent its summers at Peleș Castle since the death of King Carol I in 1914.

On September 26, 1916, the German offensive began in Transylvania. Soon the Germans occupied the main cities in southern Transylvania, Sibiu (29 September) and Brașov (9 October), thus having free access to the main passes crossing the Carpathian Mountains. At the beginning of the German siege of Brașov (October 1), the evacuation of Peleş was ordered. In a hurry, many art pieces were packed, primarily the painting collection, but also everyday items, for a total of 64 crates, which were loaded into three wagons. Subsequently, several small items, from silverware to pieces of furniture, as well as the entire inventory of King Carol I’s office, were collected. It is not known exactly where these objects were stored during the war but it is clear that they were taken into in Moldavia and returned, after the conflict ended.

Requisitions and thefts at Peleș Castle

The summer residence of the Royal Family of Romania was occupied by the German troops from October 1916 to December 1918. During those two years, the castle was inhabited by General Mackensen and other German officers. They were only content to make use of the residence, without looking after the edifice and without even changing anything, not even its administration and staff.

During the two years of occupation, Peleș Castle suffered from requisitions, damages, and theft. Even the administration of the Royal House requisitioned 30 beds and mattresses for the Queen Marie Hospital in Bucharest at the start of the war. When the Romanian capital was occupied by the German troops, the beds and mattresses were sent to a Moldavian hospital, but never reached their destination. The German army also made requisitions, taking from Peleș 104 meters of rail track and three wagons.

In his correspondence with the administration of the Royal House in Bucharest, the chief architect of the castle, Karel Liman, writes on December 30, 1918, after the departure of the Germans, that: “… we will deal with all the needs of the castle and everything will be put in order although we found everything on the ground floor and the first floor of the castle in the greatest disorder and uncleanness. […] In these two years, only the Marshal’s dwellings, the reception halls and the Kaiser’s apartment at the castle and only the rooms for the German officers were cleaned, the rest remained in these two years in an unbelievable state”.

To the damage suffered by the castle during the German administration, as a result of requisitions and negligence, thefts were added, whose supposed author was the one man who ought to have taken care of Peleș, castellan Willke. He left the castle after the withdrawal of the German troops, and the architect Liman noticed many objects. Suspecting Willke, Liman and a few employees of the castle descended to his home where they found several objects taken from the royal residence, some even packed in boxes and ready to be sent to addresses in Germany. Among these objects were books of Queen Elizabeth, curtains, paintings, and so on.