Photos Of Holodomor — The Ukrainian Famine That Killed Millions 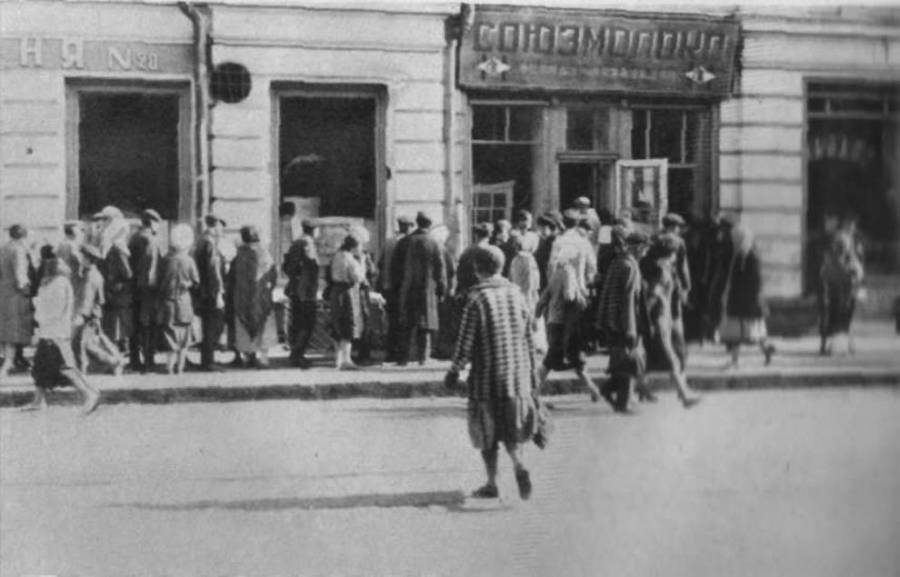 The Ukrainians call the famine the “Holodomor,” a name that means “murder through starvation.”

In 1932 and 1933, millions died in the Ukraine. The country was hit by the Holodomor, a famine so terrible that, for the people caught in the middle of it, seeing an emaciated body collapsed on the side of the road had become an everyday sight. 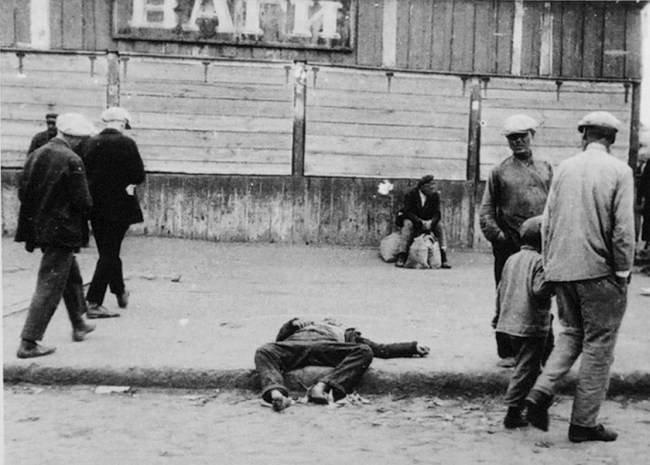 “The sympathy shrinks,” the photographer of this picture notes in his original caption. Kharkov, Ukraine. 1933.

The country became a living nightmare; a place where thousands of starving people had turned to cannibalism to survive. And yet, in the news outside of the Ukraine, newspapers denied it was even happening. 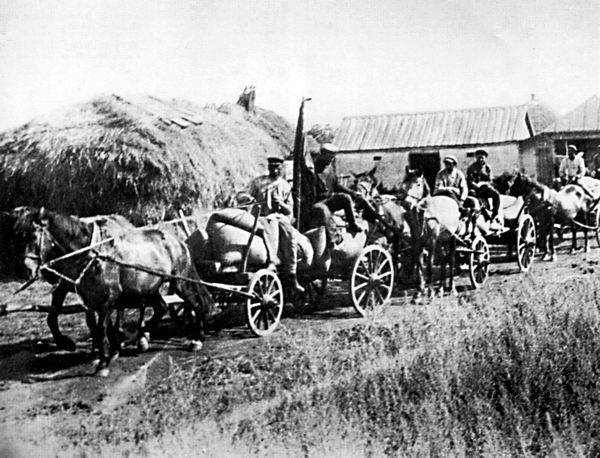 A “Red Train” of carts is sent out by the Soviet government to take food away from the Ukrainian people. Oleksiyivka, Ukraine. 1932.

The Ukrainians call the famine the “Holodomor,” a name that means “murder through starvation.” The Holodomor, they believe, wasn’t just a natural disaster, it was deliberately planned to starve them out. 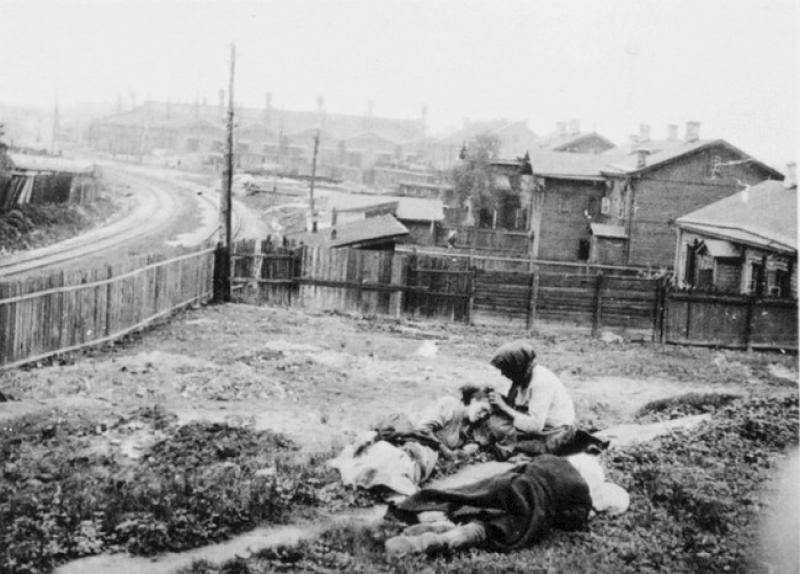 A family starves in their own yard. Ukraine. 1933.

Soviet leader Joseph Stalin had been warned that the country would be hit with a famine two years before the Holodomor started, but he did little to stop it from happening. He was bent on industrializing the Soviet Union. Even with a famine coming, he kept moving workers into the city and out of the farms of the countryside. 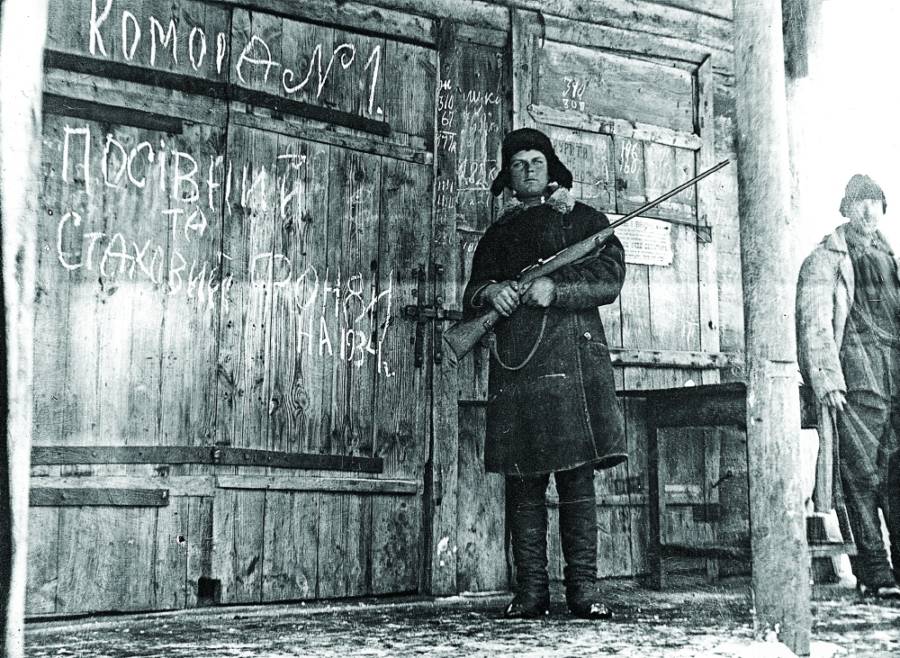 An armed guard stands in front of the grain warehouse, ready to shoot anyone who tries to steal the food inside. USSR. Circa 1934.

When the Ukraine famine started, Stalin actively made things worse. He exported almost two million tons of food out of the Ukraine, pulling away the little food the people had to survive. Then he barred the people there from moving to any other part of the country. They had no food; they had no way to escape – nothing to do but wait and die. 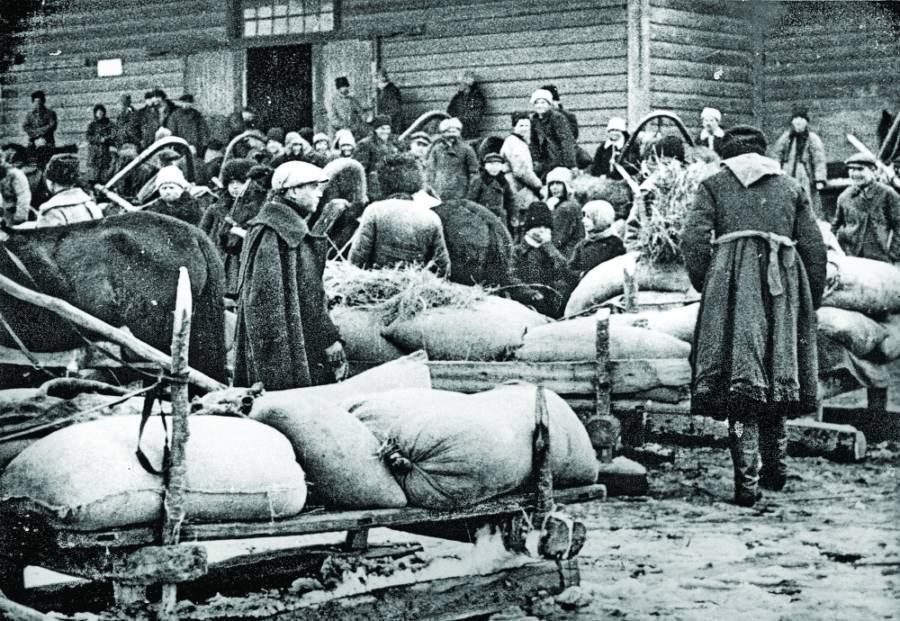 People did what they had to do to survive. Men became thieves, women became prostitutes, and countless people did things far, far worse. Some turned to cannibalism. 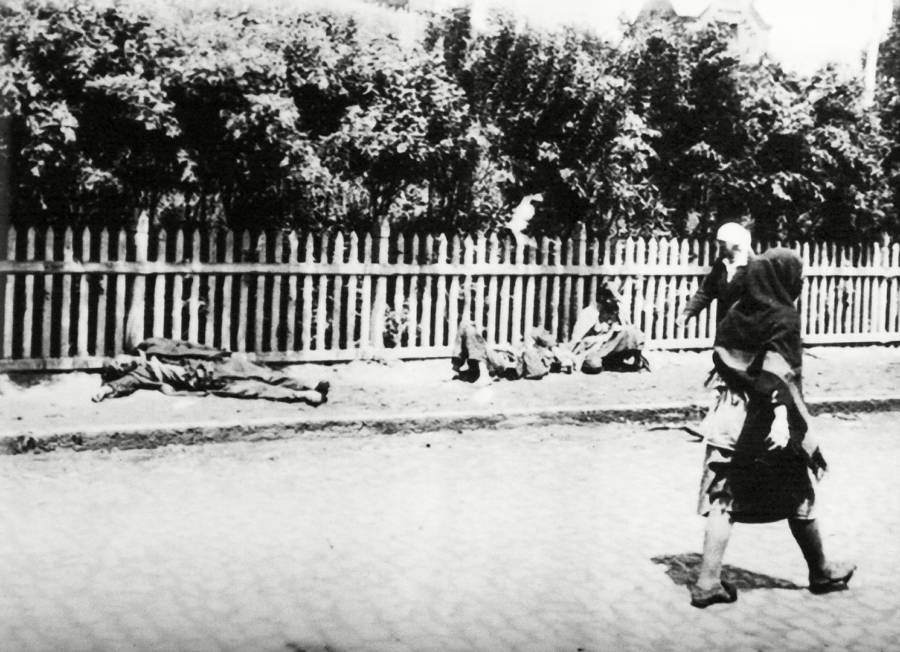 A woman walks by two starving peasants, dying on the streets. At this point, the sight of dying men has become so commonplace that it no longer warrants a second glance. Kharkiv, Ukraine. 1932.

Life, during the Holodomor, was so harsh that 2,500 people were arrested and convicted for eating their neighbors’ flesh. The problem was so widespread that the Soviet government put up signs reminding the survivors: “To eat your own children is a barbarian act.” 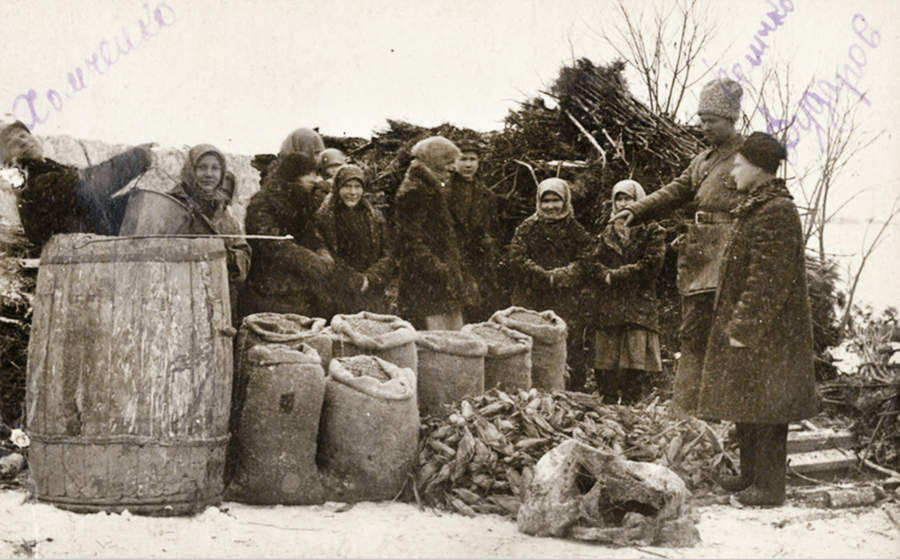 Soviet guards take crops from Ukranian farmers. The food they grew will be redistributed to others parts of the Soviet Union. Odessa, Ukraine. November 1932.

It seems impossible to throw a blind eye to these horrors but Stalin barely acknowledged that there anyone in the Soviet Union was hungry at all. He denied that the Ukraine famine was happening for years. 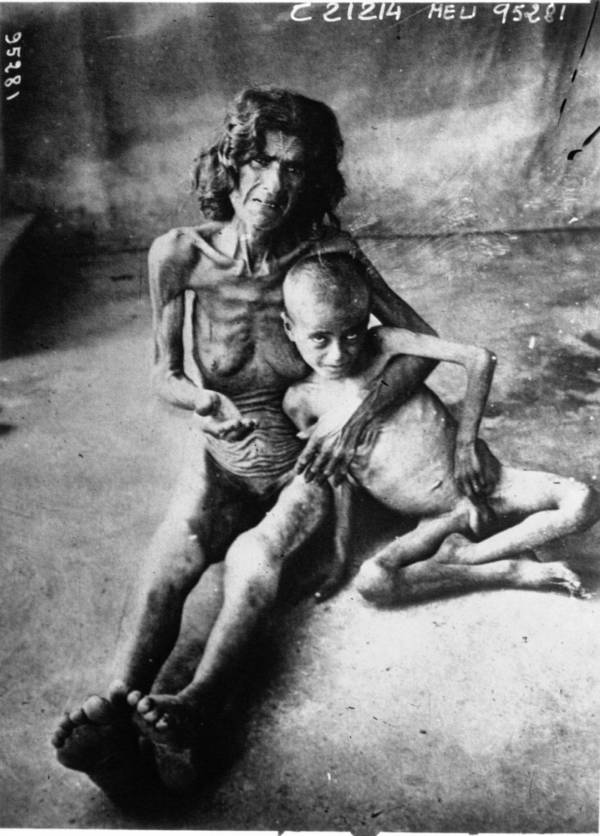 A starving mother holds her child at the height of Holodomor. USSR. Circa 1933.

The cover-up didn’t just happen in the USSR. The New York Times published long articles calling the Ukraine famine “mostly bunk,” once quipping, “You can’t make an omelet without breaking eggs.” The man writing them, Walter Duranty, had seen the horrors of the Holodomor first-hand – but he’d been pressured into silence and lies. For an article that covered up a genocide, he was awarded the Pulitzer Prize. 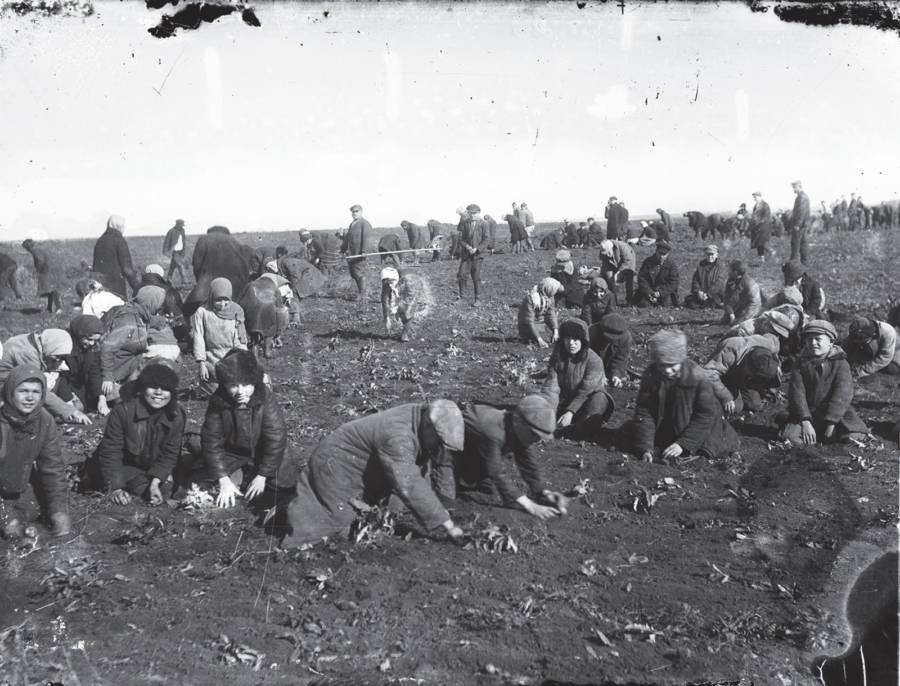 Children struggle to dig through the frozen earth for potatoes. Udachny, Ukraine. 1933.

Today, there’s no question the Ukraine famine really happened – the only thing in question is the specifics. Nobody knows for sure how many people died. The lowest guesses put the number at two million, while others rise well over 10 million dead. 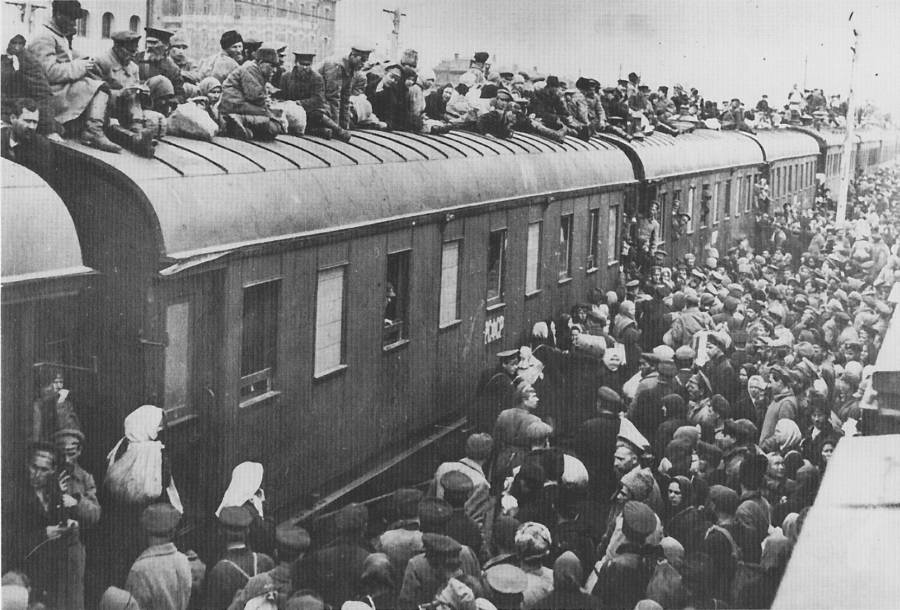 Refugees try to escape the Ukraine flood by hopping onto a train. Some cling to the roof to get out. Ukraine, USSR. 1933.

For Holodomor deniers, the exact number has become a fierce question of debate – but when millions of people die, does the number of millions really change whether it was a tragedy?

Whatever petty details we can debate, there is no question that the Ukraine went through a horror unlike any that can be imagined. Over two years, millions of people died in the worst way possible – by slowly starving to death and watching their neighbors turn to cannibalism. It’s also a fact that the people in power actively went out of their way not to help. 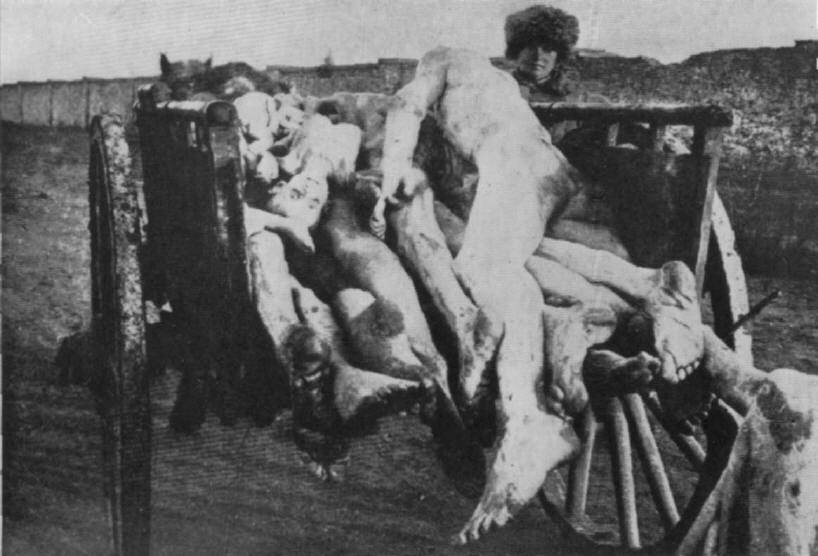 These things happened. The Holodomor happened. And it could have been prevented.