Queen Marie and Romania’s entry into war. “Of all the terrible fears, war was the worst” 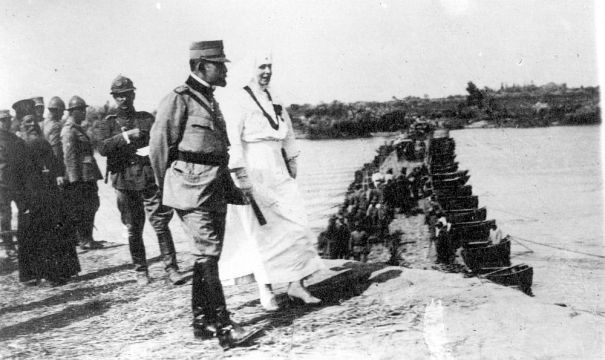 Romania decided to enter the war after two years of neutrality. It was August 27, 1916, and Queen Marie wrote in her diary: “What a beautiful morning, how silent and quiet is everything, but I know there will be war”. The Queen was determined to play her part in the war and wanted nothing else but to help Romania in every possible way. Here’s what the Queen wrote in her diary on the first official day of war:

I woke up this morning knowing what would come- I had known for many weeks- I am among the few who knew- I carried this terrible secret with me and I did not talk about it because no one had to know. I laughed and made plans, and I pretended everything was as always, but I knew.

What a beautiful morning, how silent and quiet it is, but I know there will be war.

For two years it has been avoided, for two long years, and now it comes- war!

The sun shines and there will be war! […]

But today I cannot think of anything but war- war.

We are a small country and we have enemies on one side and the other, but there will still be war!

Our poor aunt died! The Heavens took mercy on her so she wouldn’t see what was going to happen.

It is better that she went before it would have crushed her heart, if there was anything left to be crushed.

She was of the opinion that only Germans had the right to win, to exist, because it is their turn to lead the world, they are the chosen people, and so on. Yet, our country turns now to the other side, convinced of the Allied final victory, hoping to fulfil its great dream!

We are right, aren’t we? I do not know, but the moment has arrived. Oh, how many lost struggles, how many doubts, how much trouble, how many hesitations on one side or the other.

Poor Nando, I know how much he’s been through, I know so much. I was closely involved in everything, almost daily.

Although a woman, I was trusted from the very beginning, I was told many secrets, I knew everything that was happening- I hoped and despaired next to them, and now it’s time!

There has been much talk about this day that I didn’t think it would even come. For two years we have kept our neutrality, we were constrained, insulted, bribed by one side, or the other…Many took advantage, some have become rich, some have been impoverished, and now all the dice have been cast, it’s war- war on the side of the Entente.

Maybe war against Germany as well. Our country has become the ally of my beloved England, France, Russia, Italy, Serbia, Japan, the poor little heroic Belgium- and should I also count Montenegro?

In the north we go up against the Austrians and maybe the Germans… and to the south, we have the Bulgarians, although I have always been told that we are not strong enough to fight on two fronts- well, we will see!

From all sides, attempts were made to bribe us, to buy us- to win us to their cause. I think rivers of money were poured over us, but in the bottom of their hearts, my Romanians had only one true sympathy, France, and one ideal: Transylvania!

There were, of course, supporters of Germany, led by the old Carp, reasonable people, which only made Nando’s situation difficult, but they could not succeed in the face of the true direction towards the other side.

Once, before Serbia was destroyed, we were told that it was time to enter the great dance. At that time Serbia still existed, and Bulgaria had not yet joined Germany- but Sarrail did not have troops! In a way, the situation would have been more favourable, but then the Russians were defeated and we would have had no contact with their side.

I get dizzy when I think about what has happened, it already seems as past history! The only major reality of the moment is that we are at war! […]

Of all the terrible fears, war was the worst, but I knew the honour of the country was worth more than the fear. The circumstances have made me involved in this situation much more closely than most queens would have been. My shoulders are considered wide enough to carry some of the weight, my heart is considered large enough to have a measure of courage in it, so nothing was hidden, I was called in to help when it was needed.

That’s how I knew the date, August 14, well ahead of others. Secret preparations had to be made- everything was depending on secret. Thank God myself and Nando had two people we could rely on: Barbu Ştirbey and col. Ballif, our aide. […]”