Queen Marie in Cluj: “Even though the cities are very Hungarian, the rural area is almost entirely Romanian” 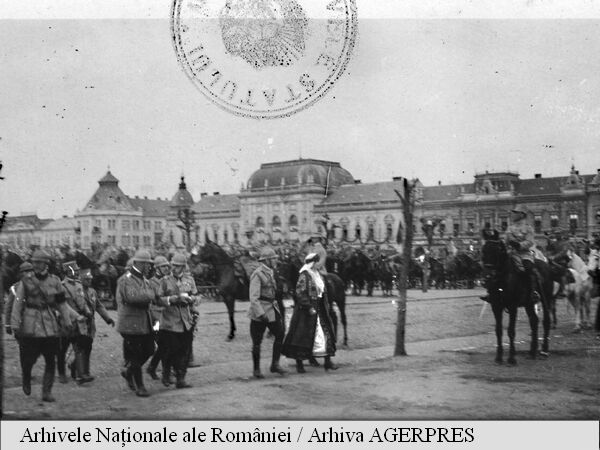 In their visit to Transylvania, in 1919, King Ferdinand and Queen Marie could not miss Cluj. The city welcomed them with open arms, Queen Marie writing in her journal the following:

“At 10:30 we arrived in Cluj, the largest city of the ones I visited. Even though the cities are very Hungarian, the rural area is almost entirely Romanian. The usual impressive reception at the train station and all the way through the city, to a large market, where a very beautiful statue of Matthias Corvinus riding a horse looked on the loud manifestation of the liberated people, which his Hungarians suppressed for centuries. The cities saddened me, there is something hostile in them and in their big houses, mostly German in style and not at all Romanian, beyond their walls one can feel sad hearts and hostile thoughts.

The parade was more numerous than the others, thousands upon thousands came from all the surrounding villages. There was also a huge cart pulled by 10 giant white oxen, filled with happy wedding goers. My regiment made an appearance here, I was very surprised and delighted, it made the best impression, and when the sun came out and shone on their horses, it made them look like metal. I was proud of my beloved 4th Roșiori Regiment and congratulated Moruzi. It seems that they have performed splendidly in the last few battles and killed many enemies. Generally the army made the best impression, many of them still have different kinds of uniforms, but the artillery and cavalry at least have splendid horses, which is a joy compared to what we had to see since our 1916 withdrawal.

At times it rained heavily in Cluj, but that did not dampen popular enthusiasm. After this wonderful parade I had to go at a reception with all the officials and then visit the hospitals where the wounded were. I spoiled them as usual with cigarettes and books.

We left at 6:00, we rested a little and at 7:30 we arrived in Turda, a small town where Mihai Viteazul was killed. Popular reception and an endless great dinner at the prefecture – very good food, but very much. I went to bed really late”.