Roland Garros, the aviation hero of the First World War 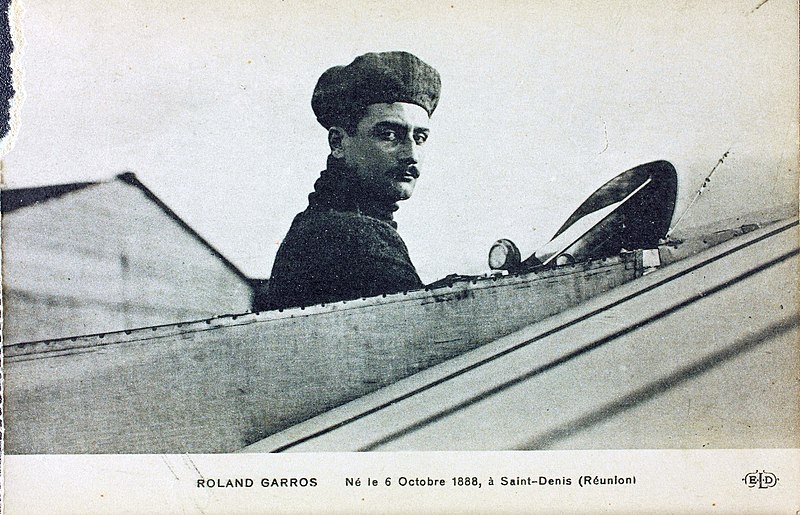 Even though one the most important international tennis tournament in the world bears his name, his story is not that well known. Roland Garros was a fan of the sport, but by no means a renowned tennis player, as one would suspect. He is one of the best known French airmen, a hero of the First World War. He was a man of records and firsts, and yet, what is the connection between the pilot who fought against the Germans and the Grand Slam tournament in Paris?

Eugène Adrien Roland Georges Garros was born on October 6, 1888, in Saint-Denis. He finished high school in Paris, where he also graduated from the School of High Commercial Studies. At the age of 21, he flew a plane for the first time: the Demoiselle monoplane. A year later he obtained the pilot’s patent, and started to take part in various competitions around Europe. Garros earned his fame before the First World War. In 1912 he won the Anjou Circuit. Then, he set a new world record for the highest altitude, flying at an impressive 5610 metres. In 1913, Roland Garros became a true pioneer of aviation, making the first nonstop flight over the entire Mediterranean, using a Morane-Saulnier monoplane. The flight started from the city of Frejus, located in the south of France and had for its destination Bizerte, a town in Tunisia.

By 1914, when the war began, Roland Garros was already a famous name in the world of aviation. On July 28, 1914, he was in Berlin and due to political events, he was put under house arrest. He knew that the war was coming and that the country needed him, so he managed to escape, boarded his plane, and flew back to France.

The first air battle in history

He enlisted in the army, convinced that the airplane will play an important role in the coming conflict. However, when the First World War started he only flew in reconnaissance missions. Proper air combat was deemed too difficult as the pilot was too busy steering the plane, and a co-pilot was needed to shoot at enemy planes. But Garros wasn’t one to be beaten and worked tirelessly to develop new air combat techniques. It is said that on August 3, 1914, Garros managed to shoot down a Zeppelin just above the German border, destroying the enemy airship. This seemed to answer the question of whether the Great War will also be fought in the air, as the Great Powers had at that moment over 2000 airplanes and dirigibles.

Based on research done by engineer Raymond Saulnier, Garros helped develop a timing system that would allow pilots to shoot through the propellers without hitting the blades. Thus, by spring 1915, his plane was equipped with this new firing system. The first aircraft he shot down using the new device was a German aircraft on April 1, 1915. Two other German aircraft were shot down on April 15 and April 18. It seemed that for Garros the fact that he was wearing eyeglasses behind his pilot goggles was indeed not an impediment.

From war prisoner back to the pilot’s seat

His passion for airplanes, but also the courage with which he fought made him famous. It’s just that the end came faster than expected. On April 18, 1915, due to a clogging engine, Garros was forced to land behind German lines and was captured. Because he was considered an intelligent soldier, the Germans moved him from one camp to another, hoping that he would not have time to plan an escape. In 1917, he was transferred to the prison camp at Magdeburg, where he met Lieutenant Anselme Marchal, and the two devised an escape plan. They got a hold of a couple of German military uniforms, and with the help of Anselme who was fluent in German, they managed to get past the sentries. Once they got out, they headed for France.

Once back home, he wanted to re-join the army. He is welcomed by the French leader, George Clemenceau, who offers him a position as an advisor. But Roland wanted to get back in the pilot’s seat. He was given this chance, but during the time he was imprisoned air-to-air tactics improved. He obtained two more victories before succumbing on October 5, just a day before he turned 30 and a month before the end of the Great War.

The tennis world pays tribute to him

In 1891 the first French tennis championship was held, the so called  ”Championat de France International de Tennis”, dedicated to players who were members of French clubs. Since 1925, the tennis tournament was open to foreigners as well. Three years later, the ”musketeers” Jacques Brugnon, Jean Borotra, Henri Cochet and Rene Lacoste won the Davis Cup for France, beating the US. In order to celebrate this success, but also to defend the title properly, the National Tennis Federation decided to build a new tennis venue. The French state offered three hectares of land near Porte d ‘Auteuil, Paris, with one condition: to name the new tennis field after Roland Garros, in honour of the pilot. Thus, the famous competition was named Les Internationaux de France de Roland Garros or Tournoi de Roland-Garros.