Romania after the Great War 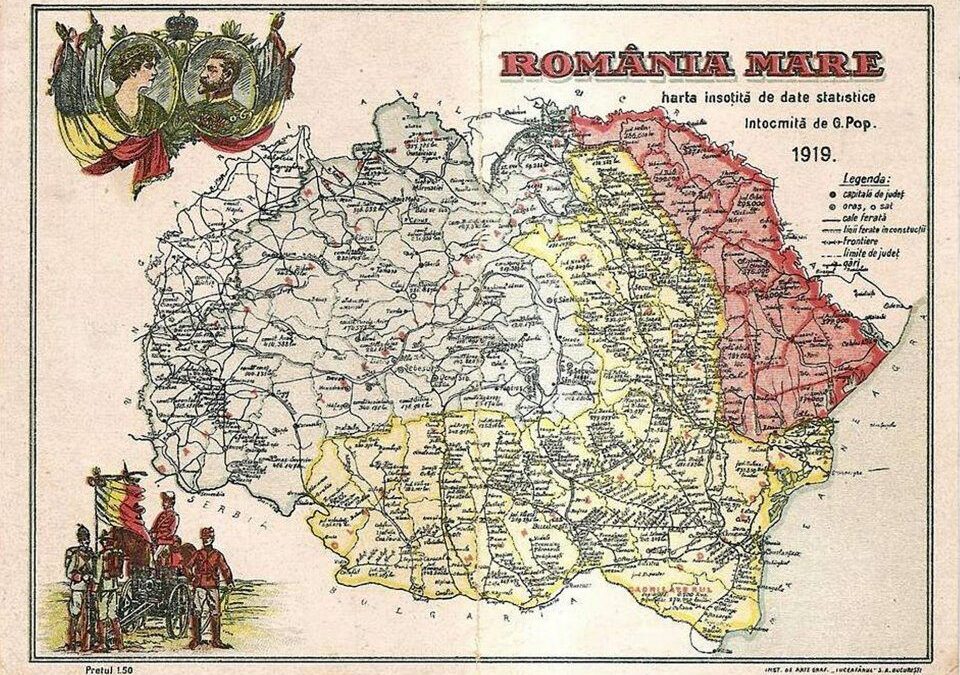 The fulfilment of Romania’s aspiration of national unity on December 1, 1918 opened a new chapter in the history of the country. Romania after the First World War was deeply transformed.

Figures and statistics reveal this change. If, in 1912, Romania had an area of ​​130.177 km² with a population of 7.160.682 inhabitants, in 1920 it had reached an area of ​​295.049 km², with 15.541.424 inhabitants, being the tenth country in Europe in size and second, in Central Europe, in terms of population numbers, after Poland. Transylvania and Banat brought significant industrial endowment, and the oil fields in the Old Kingdom promised to become a source of significant income, along with agriculture. Economic prospects seemed good at first sight for Romania, but at a deeper look at the interwar Romanian economy and society, important problems could be observed. The census of 1930 showed that the vast majority of Romania’s population (78.2%) dealt with agriculture, only 7.2% were employed in industry, 3.2% in commerce, 1.7% in transport, etc. The agrarian reform of 1921, one of the most radical in Eastern Europe, addressed the inequitable distribution of land (5.835 landowners held 47.7% of the arable land), but it resulted in a fragmentation of the property, which led to economic inefficiency.

During the interwar period the effort to develop the industry was intense, as can be seen from the increase of motive power, from 14.8 hp (horsepower) per thousand inhabitants in the Old Kingdom in 1915 to 30.5 hp per thousand inhabitants towards the end of the interwar period. Due to the structure and trends of the national economy, inter-war Romania was a country of contrasts: in agriculture, the small, poor peasant households were predominant; the industry had only a small share in the national economy. The contrasts and fractures between the economic and social sectors, and the different social classes were perfectly visible in Romania. Foreign observers are unanimous in revealing the strange juxtaposition between the luxury and western refinement of the elite and peasant living. Ivor Porter, who came as an English lecturer at the University of Bucharest in 1939, later, a British secret agent, said: “I will never see a country with so many contrasts and contradictions. Lagonda, Hispano-Suiza and Packard automobiles were driving on the national roads, but they had to avoid carts pulled by oxen, at night, in front of a bunch of Gypsies who made food on the hot asphalt”.

The first interwar decade was to be marked by two major political figures. Ion I.C. Brătianu, president of the National Liberal Party and Iuliu Maniu, president of the Romanian National Party, then after the 1926 merger with the Peasants’ Party, president of the Peasants’ National Party. The one who was to dominate the political scene, until his death in 1927, was Ionel Brătianu, both through the Great Liberal Government (1922-1926), and especially through back room politics. The basic economic principle of the liberals was “through ourselves”, the creation of a capitalist economy through the powers of “domestic capital”, competed by foreign capital. The craftsman of this economic policy was Vintilă Brătianu, Ionel’s brother. This economic policy delayed the development of the Romanian economy, which after the Great Union needed foreign capital and investment.

On January 4, 1926, the Crown Prince Carol II of Romania, after many conjugal escapades, is removed from the succession to the throne. “This playboy is a danger to the country and to us; we should thank Providence for getting rid of him”, Ionel Brătianu confessed to Gheorghe Tătărescu, shortly before the crown council meeting, which took note of Carol’s resignation to the throne. Just over a year later, after the death of King Ferdinand, six-year-old Mihai, the son of Carol and Princess Helen of Greece was proclaimed king. His prerogatives were taken over by a Regency composed of Prince Nicholas, Patriarch Miron Cristea, and the President of the High Court of Cassation and Justice. The death of King Ferdinand and Ionel Brătianu in the same year (1927), was to mark the beginning of a political crisis that would define Romania in the coming years.