Romania and the Little Entente 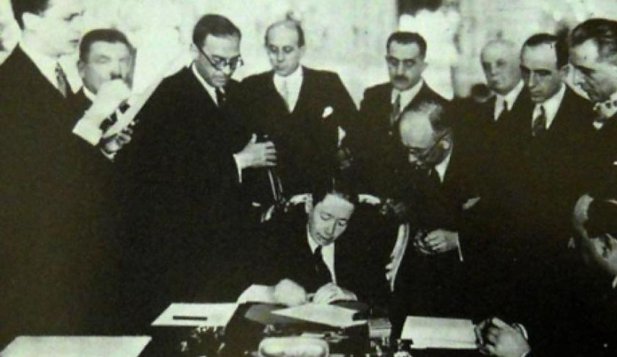 Through the treaties signed at the Versailles Peace Conference (1919-1920), Romania managed to obtain the international recognition of the Great Union. The leaders of Romania at that time had to preserve the integrity of the new borders by maintaining and observing the new Versailles international order. To defend itself against the revisionist states it was surrounded by, Romania created a system of alliances that counterbalanced the threats from Hungary, Bulgaria and the USSR. The Little Entente, the Balkan Pact, the strategic partnership with Poland and the collaboration with France, the most powerful western military force on the continent, were to strengthen Romania’s security.

Ever since 1918, foreseeing the danger represented by revanchist states, Take Ionescu proposed a project to establish a barrier to German expansion, from the Baltic Sea to the Aegean. His project was presented in September 1920, with the desire to obtain support from Western states: “For a general alliance we must be five, alongside Poland. An alliance of five would, in the true meaning of the word, be a great European alliance. Under the aegis of France and England, it would constitute a cross-border barrier in Europe that would protect order inside and prevent outside attacks.” The system of alliances in Eastern Europe was designed around the new political realities imposed by the Versailles treaties. Also, these alliances were contrary to the revisionist tendencies of the totalitarian powers and in close connection with the western democracies, their main guarantor being France.

Take Ionescu, together with Czechoslovak leader Edvard Beneš and Serbian Prime Minister Milenko Vesnić were the craftsmen of a program that pursued these goals through an alliance (in which Greece and Poland were to be attracted), known as the Little Entente. Thus, initially, in August 1920, the bilateral defensive treaty was signed between Czechoslovakia, on the one hand, and the Kingdom of the Serbs of Croats and Slovenes (the future Yugoslavia), on the other. On April 22, 1921, a convention of defensive alliance between Romania and the Czechoslovak Republic was signed in Bucharest, and on June 7, in Belgrade, Romania signed an alliance with Yugoslavia.

“Art. 1. In the event of an unprovoked attack by Hungary and Bulgaria against one of the High Contracting Parties, the other party undertakes to assist the assailed party in the manner decided by the arrangement provided in Article 2 of this Convention.

Art. 2. The competent technical authorities of the Kingdom of Serbs, Croats and Slovenes and the Kingdom of Romania shall jointly establish the necessary measures for the fulfilment of the present Convention in regards to a military convention which will be concluded later.

Art. 3. Neither one of the High Contracting Parties will be able to conclude any alliance with a third power without the prior approval of the other.

Art. 4. In order to coordinate their peaceful efforts, both governments are obliged to seek each other’s counsel on foreign policy issues that are related to their relations with Hungary and Bulgaria.

Art. 5. This Convention shall be valid for two years, starting from the day of the exchange of ratifications. At the expiry of this period, each of the parties may denounce the present agreement.

It will remain in effect six months after the date of termination.

Art. 6. The present convention will be communicated to the League of Nations, according to the pact.”

At the same time, many of the Eastern European states were under the protection of France, signing with it a series of treaties. However, the tendencies of the states within this system of alliances were often divergent, this being one of the factors that led to the failure of the collective security policy. From the very beginning, although Poland was intended to be a part to the Little Entente, it remained on the side-lines. Poland was already a signatory to a treaty with Czechoslovakia, although there were numerous disputes over the Teschen region, and a hostility to Czechoslovakia’s perceived closeness to the U.S.S.R.

The Little Entente was disbanded after the Munich agreement of 1938, where France abandoned its guarantee of the Czechoslovak borders. On March 14, 1939, Slovakia declared its independence and the rest of Czechoslovakia was divided between Germany, Hungary and Poland.