Romania and the military events of the summer of 1918 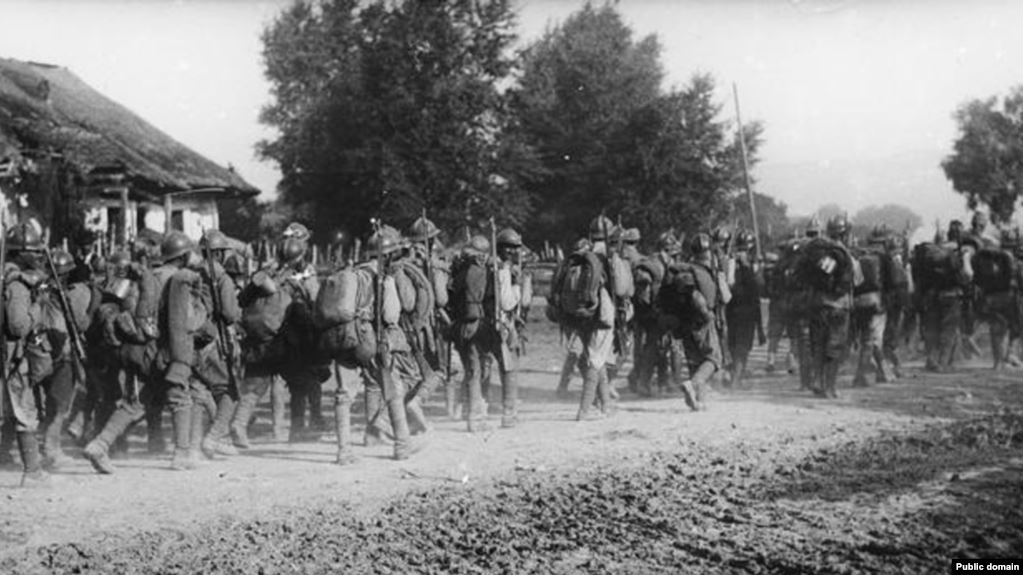 What Romania went through in 1918 can be characterised very well by a famous saying: from agony to ecstasy.

On August 27, 1916, Romania entered the First World War on the side of the Entente, with the purpose of uniting to the country the provinces inhabited by Romanians from the Austro-Hungarian monarchy. However, after only three months, most of the country, including the capital, was occupied by the Central Powers. The government and the rest of the country’s army withdrew to Moldavia.

Iași was to become the capital of Romania for the next two years. The winter of 1916 offered the Romanian army the respite it needed. Reorganized, properly equipped and trained, the Romanian army in the battles of the summer of 1917 from Mărăști, Mărășești and Oituz would write some of the most beautiful pages in its history. These victories were the Entente’s only auspicious events in 1917.

Unfortunately for Romania, the revolutionary movements in the Russian Empire were going to affect it dramatically. Following Lenin’s seizure of power in Russia and his decision to conclude peace under any conditions with the Central Powers, Romania’s fate seemed sealed. Left without its Russian ally, Romania was in turn forced by circumstances to seek peace. Led by the conservative Alexandru Marghiloman, the newly installed pro-German government of Romania had the mission to conclude peace with the Central Powers. By the Treaty of Bucharest, signed by Romania on May 7, 1918, the terms of peace were agreed upon. It was a humiliating peace that transformed Romania into a colony of Central Powers. Although the Romanian Parliament ratified the Treaty, King Ferdinand refused to promulgate the “peace”.

The beginning of the end for the Central Powers

In the meantime, things took a new turn on the Western Front. The Second Battle of the Marne in the summer of 1918 was the last major offensive of the Germans in the First World War. It did not take long for the news to reach Iași that the Germans were ultimately stopped and forced to retreat beyond the Marne, that thousands of US soldiers were arriving each day on the French front, and that the Austrians were reeling from the failure of their Piave offensive on the Italian Front. These developments gave hope to the Romanians that the fate of the war could change in favour of the Entente. Moreover, the Romanians were increasingly attentive to the changes taking place within the Austro-Hungarian Monarchy, the Czechs and the nationalities of the future Yugoslav monarchy proclaiming their right to national self-determination. Despite these changes, the Prime Minister of Romania, Alexandru Marghiloman, failed to predict the future evolution of the conflict. He remained convinced that the future of Romania still depended on the close relationship with Germany and Austria-Hungary. For this reason, he continued to put pressure on the King to ratify the Treaty of Bucharest. However, King Ferdinand and the majority of Romanian politicians were increasingly convinced that the Entente was close to victory. The events on the Western Front gave them hope. News from abroad was spreading faster and faster, both in the occupied territory and in Moldavia. Excerpts from German police reports are indicative for the situation. “The street life in Bucharest mirrors the deterioration of the state of mind: heated, open discussions about the war maps, the lack of respect from Romanian cleaning teams, which were until now respectful”; “When uniformed German and Austrian officers appear in the streets, insults are hurled, especially the word «Boche». Demobilized Romanian soldiers were again the provocateurs of resistance.

The non-ratification of the peace treaty by King Ferdinand and the ever increasing agitations in Romania provoked numerous debates in Berlin. The possibility of ousting the Hohenzollern dynasty from Romania under the threat of military action and the occupation of the country was discussed. Ludendorff met on August 14 with German army generals at Spa to plan a military operation under the codename “Fangstoss”, and an ultimatum was also prepared for the Romanian authorities. On September 13, Mackensen was ordered to prepare to march on Iași. However, three days later, Ludendorff was informed by generals in Vienna that following peace initiatives, the troops of the Austro-Hungarian Empire would not participate in the military action. Ludendorff cancelled the Fangstoss operation, but expressed his dissatisfaction, warning Austria-Hungary that it alone would bear the repercussions of a possible action by Romania. The beginning of the end for the Central Powers came on September 15, when General Louis Franchet d’Esperey launched the long awaited offensive of the Allied army on the Macedonian Front. Things would also change for Romania.