Romania, dissatisfied with the way negotiations were handled at the 1919 Paris Peace Conference 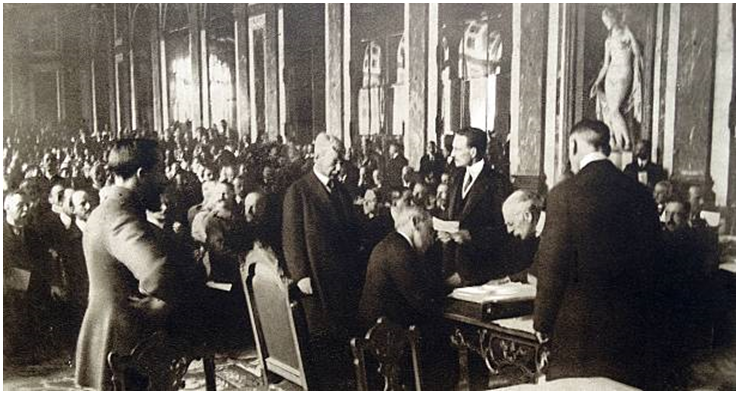 Ionel Brătianu, the Romanian prime minister, had a tumultuous relationship in Paris with the leaders of the Great Powers. He was deeply dissatisfied with the fact that the Great Powers did not recognize Romania’s equal status that would allow it to better promote the interests of the country he represented.

The first argument between Romania and the Great Powers broke out due to the number of representatives established for each participating state. Belgium and Serbia received three seats each, even though these two countries did not benefit from a written guarantee, like Romania, which received two seats. Brătianu complained to the Big Four: “I am treated as a poor bastard who deserves mercy and not as an ally who has the right to justice”. The bitterness was sweetened only by the welcoming message addressed to the Romanian delegation by French president Raymond Poincaré: “Romania decided to fight only to achieve its national unity, against which arbitrary forces acted. Abandoned, betrayed, suffocated, she had to submit to a horrible treaty, which you are now called to re-examine”.

Soon, Ionel Brătianu would receive other bad news. The Allied Powers had reserved the main issues that would be submitted for final approval in plenary sessions, and Romania was not given any place in the Commission discussing the formation of the League of Nations. “I do not want to lose sight of the fact that the issue of the League is currently being discussed, and it would be a weak proof of Romania’s interest in forming this League if I did not contribute to the explanations formulated by the representatives here. It is certain that in the representation of such a League the relative power of each state was taken into account, and it would be right, at the same time, to take into account the interests which determine each state to favour the formation of this League, as small states show more interest in it than large ones. Both points of view must be taken into account when determining the representatives of the League. Romania asks to be represented in this commission only to express its interest in the principles of this League”, Brătianu protested.

To secure the support of the US delegation, Brătianu had a meeting with Colonel House on January 27th. Edward M. House listened to a presentation of Romania’s history, including an account of what the country had to endure during the war. House interrupted Brătianu and told him that he was “entirely familiar” with the tragedy that Romania had gone through, expressing his sympathy for the Romanians’ wishes. Ionel Brătianu thanked him for his support, being the only message of “encouragement I had received since arriving in Paris”. The beautiful words of Colonel House made Brătianu hope that he could find in the United States the friend he did not find anywhere else. Brătianu summed up the meeting with Colonel House: “I could characterize the dialogue with him as the single ray of light on Romania’s darkened sky”.

Ionel Brătianu: “I have a reputation for being impossible”

House then arranged a meeting for him on January 28th with Douglas Johnson, the US geography expert. Brătianu tried to convince Johnson of one thing, that US was Romania’s best friend and that France, from which he had expected friendly help, “had lost a great opportunity to become the champion of the cause of smaller nations”. The Romanian prime minister assured Johnson of refraining from expressing his dissatisfaction: “I have a reputation for being impossible, which always causes confusion when I try to get too much. Therefore, I managed to show the Allies that, after all, I am not such a bad man and that I preferred to ignore the things I could have complained about”.

In the end, small states were given the opportunity by the Great Powers to support their demands through written memoranda and hearings before the Supreme Council. This was the solution put forward to resolve territorial disputes between some states that sided with the Entente in the war, especially Polish-Czechoslovak divergences regarding the Tschen region, but also the Romanian-Serbian ones regarding Banat.