Romania, the Republic of Councils in Hungary and the Great Powers 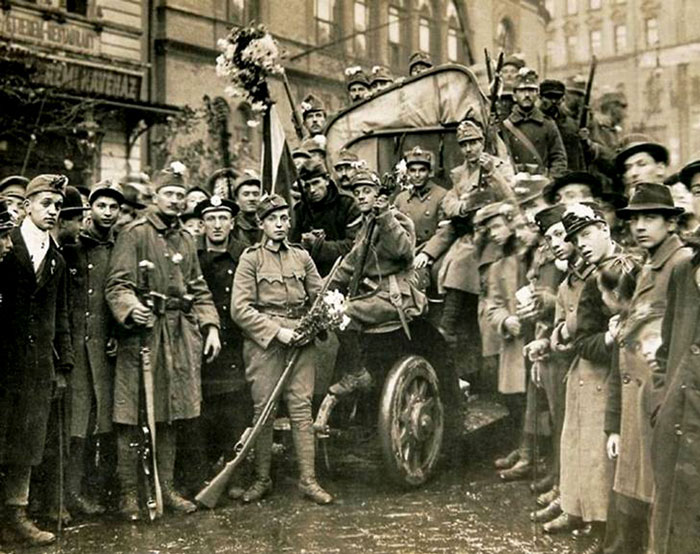 On March 21st, 1919, the Hungarian Bolsheviks, led by Béla Kun, seized power in Hungary. This was a clear warning sign for Romania, which was the first country severely affected by the Bolshevik threat.

Following the Bessarabian Country Council decision in early 1918 for the province to unite with Romania, the Russian Bolsheviks decided to take retaliatory measures against Romania. Moreover, Bolshevik troops attacked Romania across the Dniester in 1919. The Romanian army intercepted communications between the Hungarian and Russian Bolsheviks revealing plans for a joint Bolshevik offensive against Romania.

Fortunately, Bolshevik ideas did not gain traction in Romania and its government sounded the alarm at the Paris Peace Conference, but was ignored by the leaders of the Great Powers until the summer of 1919.

The Bolshevik seizure of power in Hungary also surprised the leaders of the Supreme Council, who did not have a well-defined policy towards the Bolsheviks. During the Peace Conference, Allied policy toward the Russian and then Hungarian Bolsheviks remained incoherent. It was not firm enough to remove the Bolsheviks, nor hostile enough to convince them that the Western powers were their fiercest enemies.

The installation of the Bolsheviks in Hungary severely strained relations with Romania. On April 16th, 1919, following an attack by Hungarian Bolshevik troops, the Romanian army, discreetly supported by several French generals, took the initiative and forced Hungarian troops to retreat beyond the Tisza River. However, Romania’s offensive provoked the protests of US president Wilson, who considered the action “a danger against peace”.

The failure of their initial military action against Romania did not discourage the Hungarian Bolsheviks, who changed tactics and, on May 30th, 1919, began a military offensive against the newly established Czechoslovak state. To everyone’s amazement, the success was on the Hungarian side. Within days, Hungarian Red Army troops managed to sever the link between the Romanian and Czechoslovak military forces and conquer about two-thirds of Slovakia, and a Slovak Soviet republic was proclaimed. The unfolding of hostilities frightened the Big Four in Paris, who decided on June 7th, 1919, to send a telegram to the Hungarian government calling for an end to the fighting, even suggesting that Hungarians could be invited to the Peace Conference.

The issue concerning the border between Romania and Hungary

On June 10th, the Council of Four invited Romanian Prime Minister Ionel Brătianu and other Czechoslovak leaders for talks in the wake of the Hungarian offensive. Interrogated by Lloyd George about the border established within the Commission for the Study of Territorial Issues Regarding Romania, Brătianu stated: “Nothing official was communicated, although there had been many rumours”. So, it was decided to finally communicate the boundaries set by the territorial commissions. The next day, the Council of Foreign Ministers sent the Romanian delegation the decision regarding the Romanian-Hungarian border.

On June 12th, the Council of Four reconfirmed the Romanian-Hungarian border, although Clemenceau drew everyone’s attention: “The Romanians will be dissatisfied and raise serious objections” suggesting “the temporary adoption of the Romanian border”. However, Lloyd George and Wilson decided that “Romanians should be threatened” in order to accept the border. Brătianu harshly criticized the border established with Hungary because the border was east of what the alliance treaty of 1916 stipulated; “Hungary retained railways and railway nodes essential for Romania’s defence”; “There was a prospect that Romanian trains would be forced to cross Hungary on the way to Czechoslovakia”; “The failure to draw a common Romanian-Czechoslovak border was necessary to cut off contacts between Bolshevik Hungary and Bolshevik Russia”. The Allies rejected his arguments again and again.

Romania puts an end to the Republic of Councils in Hungary

Romania’s fears, but also those of the Supreme Council regarding Bolshevik Hungary, were proven right by Kun himself, when he ordered the attack on Romanian troops on July 20th. Clemenceau and other Allied leaders were concerned at the start of the Hungarian Bolshevik offensive that “Romanians will not be able to resist”. But on July 24th, after four days of retreat, the Romanian army counterattacked, destroying Kun’s troops in just a few days. On the evening of August 3rd, 1919, the first Romanian soldiers entered the Hungarian capital abandoned by the Bolshevik government.

When Herbert Hoover announced the entry of the Romanian troops in Budapest, Georges Clemenceau expressed his astonishment plastically: “The Council can neither condemn nor congratulate the Romanians; it is best for it to not say anything”.