Romanian soldiers from Transylvania, in Vienna and Prague 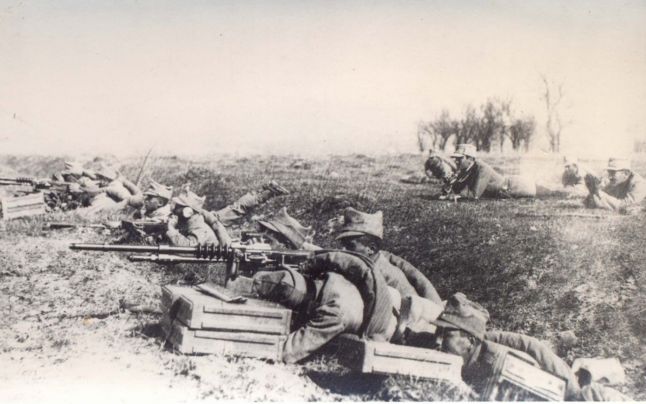 With the dismemberment of the Austro-Hungarian Empire, Romanian soldiers in Transylvania who were mobilized in the imperial army briefly kept the peace in the major cities of the Empire: Vienna, Prague, Bratislava and Budapest.

Before the First World War 2.8 million Romanians lived in Transylvania. Officially, Romanians accounted for slightly more than half of the total population, namely 53.74%. However, the 1910 census was disputed, with Romanians claiming that their number was higher, and that the statistics were skewed in favour of the Hungarians- which would have accounted for 31.6%, according to the same report. Another statistic suggested that Romanians represented 70.5% of the total population, the Hungarians- 18.9%, and the Germans- 5.1%. Romanians were the majority, but this was not reflected in their living conditions. Most of the Romanians were poor, peasants who practiced subsistence farming and had almost no political relevance.

At the outbreak of the First World War, Austria-Hungary mobilized 449.796 Transylvanian Romanians, with another 34.578 serving in auxiliary services.

In the autumn of 1918, tens of thousands of Romanian soldiers from Transylvania were withdrawn from the front to guard major cities- Vienna, Budapest, Prague- in order to eliminate Bolshevik agitation. Because the Transylvanian troops were not contaminated by Bolshevism, they were vital to police activities in these large cities and other areas. They were even more important as regular police units rebelled because of the government’s decision to send them to fight on the front. Thus, in Vienna there were about 50.000 Transylvanian soldiers, under the command of Romanian General Ioan Boeriu, about 25.000 soldiers commanded by Brigadier General Alexandru Hanzu, and about 15.000 soldiers in Budapest, under the command of Colonel Danila Papp.

In Vienna the 64th Orăștie Infantry Regiment and the 31st Sibiu Infantry Regiment ensured the security of the former imperial capital from November 12 to November 21, 1918 at a time when the Empire ceased to exist, and Transylvania declared its independence through the representatives of the Romanian National Party. On October 31, the Central Romanian National Council was established in Arad, a true Transylvanian government headed by Ştefan Ciceo-Pop, having under its command the Central Romanian Military Senate of the Officers and Soldiers of Vienna. The Romanian Legion in Prague was also subordinated to the Senate. The commanders of the troops asked the soldiers to take the following oath: “I swear faith to the Romanian nation and obedience in all to the Romanian National Council. I will only serve the Romanian people, which I will not forsake in no way and under no circumstances. So help me God”. The purpose of the Senate was to “gather and organize officers in a national military organization that would lead a continuous and solid struggle for the achievement of the Romanian ideals of freedom and national unity”. The other nationalities in the former empire had also created such national councils.

Iuliu Maniu, the only man with military experience in the leadership of the Romanian National Party, had a decisive role in organizing the Transylvanian soldiers coming from the front to join the already created troops. In Vienna, Maniu did not have a military role but his activities focused on the political-administrative areas and acted as a liaison to the Viennese authorities, his leading role in those troubled moments being vital for what will follow- the Military Senate emerged as a result of one of his initiatives.

The Romanians occupied the central barracks of Vienna and subsequently informed the Minister of War that the they took control of the capital. The new Viennese authorities recognized the Romanian organizations and provided them living quarters, office spaces and even money for their upkeep. When the Bolshevik Revolution began in Vienna, the Romanian troops had to intervene to disperse the demonstrations and prevented the looting and destruction of shops.

Iuliu Maniu and the other commanders managed to obtain rail transport for their troops from the Austrian authorities. They left for home after November 27 via the Kingdom of the south Slavs, but were disarmed by the Serbs. When they finally arrived in Transylvania, the troops were recruited in the National Guards and the Royal Romanian Army.

The Romanian Legion in Prague was formed on October 30, 1918 and consisted of troops from the 2nd Regiment of Braşov, the 37th Regiment of Oradea and the 51th Regiment of Cluj. The Czech authorities, who had just declared their country’s independence and had no troops recruited from the Czech Republic, had to rely on the Romanians to maintain order. The soldiers returned later in Transylvania by train through Austria and through the Kingdom of Serbs, Croats, and Slovenes. The returning Romanian soldiers were yet again disarmed by the Serbian authorities who wanted to prevent the formation of a strong, well-armed and well-equipped Romanian army that would’ve presented a challenge to their planned takeover of Banat. Once they arrived in Transylvania, the soldiers either joined the National Guard in Transylvania or the Romanian Royal Army, fighting well into 1919 until the occupation of Budapest by the Romanians.