Romanian war prisoners in the camps of the Central Powers 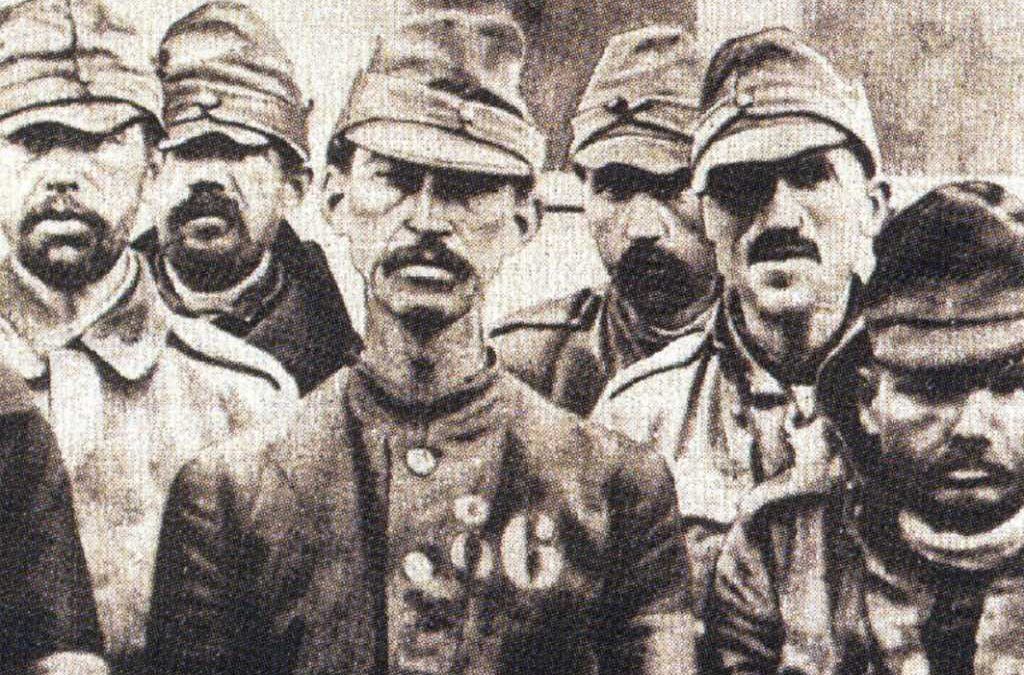 The initial victories following Romania’s entrance in the First World War were overshadowed by a string of defeats that led to the capture of tens of thousands of Romanian soldiers. These men were then marched off behind the barbed wire fences of the prisoner-of-war camps in Bulgaria to endure years of imprisonment.

War prisoners or persons considered hostile to the regime were imprisoned and kept under strict surveillance in camps. The Germans, in particular, began to take more and more prisoners as the war progressed. Thus, by 1915, they had over 600.000 captured prisoners. Due to their ever-increasing number, the German authorities created a system of camps where prisoners were used as a free labour force to meet the demands of the war economy. Soon the number of camps grew even more, spreading all around Germany, Bulgaria and Austria-Hungary. In Bulgaria, the government had established a system of over 20 camps, such as those in Sofia, Haskovo and Sliven.

Thousands of Romanians were held in the central and western part of Bulgaria, more precisely in the Stara Planina mountain region. When the war with Romania started, about 16.500 people were sent to the camps. Those usually were able-bodied men, former soldiers, had a suspicious political past, or were members of political, cultural or sports organizations. Women and children were sent also to the camps for suspicious behaviour, for their connections with people already taken prisoners, or if they were related to families opposing the Central Powers.

The largest number of Romanian prisoners came in September 1916 in the aftermath of the Turtucaia military disaster. Then, about 28.000 men arrived in the Bulgarian camps, where they were held captive until June 1918. George Topîrceanu, a personality of Romanian literature was also captured and taken to a camp in the Planina region, where he spent a year and a half. He was finally released due to the intervention of Constantin Stere, a writer and politician with great influence in Germany. In his memoirs of the imprisonment, Pirin Planina, episoduri tragice și comice din captivitate [Pirin-Planina, tragic and comedic episodes from captivity], the poet tells of the daily hardships he had to endure on Bulgarian territory.

From the very beginning, the tensions ran high between the Bulgarian and the Romanian soldiers: “I was made aware that the Bulgarians hated us. I already knew by heart their stubborn refrain, which I on so many occasions later, as a leitmotif of their simple and primitive hatred: Triniasi godina …”.

The soldiers also tried, by any means, to instil fear in the Romanian prisoners, exhausting them mentally and treating them with cruelty.

“From behind them, a few machine guns were then brought ostentatiously and directed towards us. When they were all prepared, an officer of theirs, with a frown on his face, stepped in the front of the ranks and shouted to us in Romanian:

Everyone that was around me is making the sign of the cross, in a brief and hurriedly manner. The moments were passing slowly, the nature’s pulse was beating ever harder. A few sparrows who were preparing to sleep in a nearby willow stung the great silence with their dreary chirping…

With my hand clenched on the revolver, I await the first flurry of bullets so that I can throw myself in the back of an earth mound that I noticed on the left – and from there to run back to the Danube through the reeds. Thus, I would still have a chance in one thousand to escape untouched…

Eventually minutes pass and no shots were fired from the ones in front of us. Was it perhaps, on their part, only a means of intimidation? …”

The living conditions of the camp described by Topîrceanu were terrible- the barracks resembled some “primitive African huts” being built of willow and alder branches. Drinking water was difficult because of contamination of the Struma River leading to cholera epidemics and dysentery. Prisoners had at their disposal some “narrow pipes with rusty and sallow water”. People preferred to drink water directly from the river even at the risk of getting sick.

The poet presents the atmosphere in the camp and how prisoners managed to live day by day, but also the multitude of different nationalities there.

“The Italians were singing, the French were talking, the Russians- because a couple of Russians also came right after us- were talking the whole day about politics and making great plans. Only the four English men, sitting on a log, to one side, were smoking out of the pipe and stood silently for hours at a time.

The Serbs were busy housekeeping. Prisoners for a long time, they had slowly adapted to this life of captivity. They got along easier with the Bulgarians, because they spoke a similar language, their shelters were more well-tended on the inside, and knew small crafts and were working for them in their spare time. (…)

On Sunday morning, the weekly fair was in the middle of the camp- a kind of exotic bazaar where, besides small articles of clothing or immediate utility, all sorts of curiosities were seen. Sitting like a Turk on the ground, every prisoner turned shopkeeper placed an object that he had for sale in front of him on a napkin. Money was hardly seen through the camp- the exchange was in nature. This kind of merchandise is called a ‹‹trampa›› [ barter]. The most extraordinary trampa that I witnessed was between a Serb from the Moravica valley and a Frenchman from upper Normandy: the Serbian offered an icon carved in walnut wood- for which he received an irrigation cannula that he turned into a cigarette. In order to make his merchandise worthwhile, the Frenchman swore that the object represents to him the most endearing and loving reminder of his homeland…”

In addition to his volume dedicated to his captivity, George Topîrceanu composed the poem “De profundis” in which he light-heartedly treats the subject of the Battle of Turtucaia, the first stanza probably being significant for the months in which he was a prisoner.

“No, this I cannot stand!

Soon, it will be a year and a half

Since you said I was unanimously

George Topîrceanu was not the only one to leave testimonies from that terrible time. Some 10.000 Romanians were also detained in the Lamsdorf camp (Poland), including sergeant Fălculete Ion from the 30 Muscel Regiment.

“We worked all day in the gravel, the ice, in the furrows, on the plough. 200 hectares were tilled by our Romanians, tied to the ploughs as oxen … The food was awfully bad; the bread was made of boiled potatoes and then mixed with sawdust. They also had only a bag of black flour for 1,000 loaves. We were entitled to 150 gr. of bread per day; I was actually getting only 100 gr. Our people were weak and drowsy. When they came from work, 20-30 of them fell regularly at the side of the road. If they happened to find a piece of bread or a cigarette butt, 10-15 of them would pile on each other, which to get it first. In the winter of 1916-1917, many died; there were days when 100-200 died and they were burying all of them together naked.”

Captives often stood 50-100 in the barracks, some even being forced to wait outside until their barracks were built. They were subjected to daily beatings and forced to work all day without water and medical care.

British and French prisoners were better treated than Romanians and Serbs as they received packages from their homes. Also, Romanians and Serbs were getting sick at a higher rate- in Germany, the Romanians had the highest mortality rate per 1.000 prisoners – 180. Thus, in German custody there were 142.326 Romanian prisoners, out of which 25.622 died in the camps.

The First World War did not just consist of the bloody battles on the fronts. A terrible struggle for life and death was fought far beyond the trenches: in inhospitable and cold camps, where hundreds of thousands of prisoners met their end.

DEX [The Explanatory Dictionary of the Romanian Language]