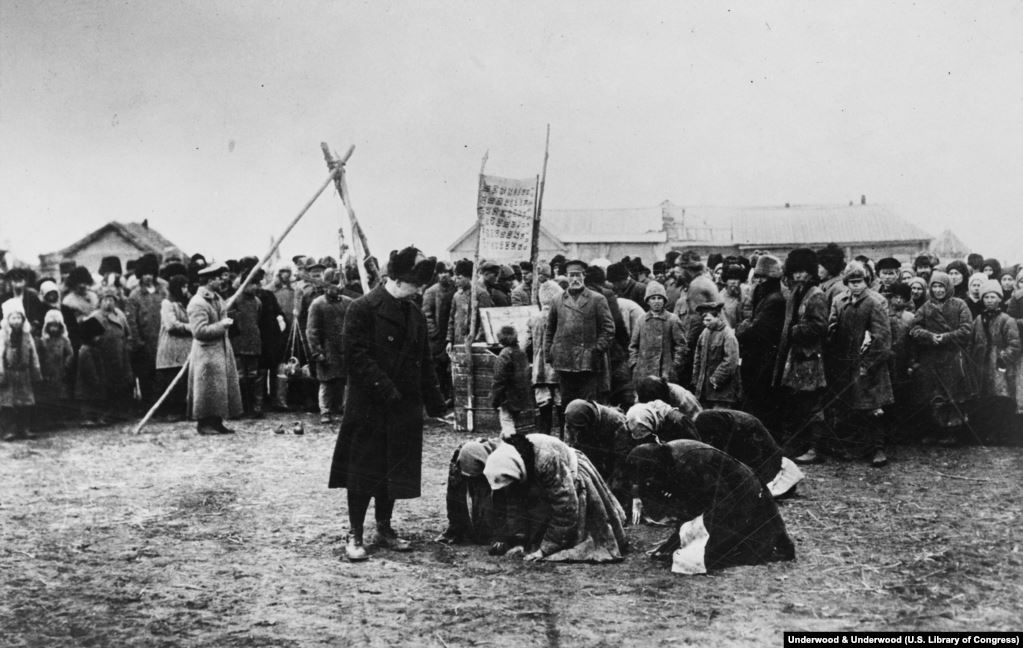 Seeds Of Conflict
Russia’s disastrous performance in World War I was one of the primary causes of the Russian Revolution of 1917, which swept aside the Romanov dynasty and installed a government that was eager to end the fighting.

The Treaty of Brest-Litovsk (1918) whereby Russia yielded large portions of its territory to Germany caused a breach between the Bolsheviks (Communists) and the Left Socialist Revolutionaries, who thereupon left the coalition. In the next months there was a marked drawing together of two main groups of Russian opponents of Lenin:

(1) the non-Bolshevik left, who had been finally alienated from Lenin by his dissolution of the Constituent Assembly and

(2) the rightist whites, whose main asset was the Volunteer Army in the Kuban steppes. This army, which had survived great hardships in the winter of 1917–18 and which came under the command of Gen. Anton I. Denikin (April 1918), was now a fine fighting force, though small in numbers.

At the same time, the Western Allies, desperately pressed by a new German offensive in northern France in the spring of 1918, were eager to create another front in the east by reviving at least a part of the Russian army. In March 1918 a small British force was landed at Murmansk with the consent of the local soviet. On April 5 Japanese forces landed at Vladivostok, without any approval.

A further factor was the Czechoslovak Legion, composed of Czech and Slovak deserters from the Austro-Hungarian army, whom previous Russian governments had allowed to form their own units.

In March 1918 the Bolshevik government agreed to let these units leave Russia by the Far East, but in May violent incidents took place during the evacuation, and on May 29 Leon Trotsky, commissar for war, ordered them to surrender their arms. They refused, defeated attempts of the local soviets to disarm them, and took control of the Trans-Siberian Railroad.

In the vacuum created by this action, two anti-Bolshevik authorities appeared: the West Siberian Commissariat, of predominantly liberal complexion, based at Omsk; and the Committee of Members of the Constituent Assembly, composed of Socialist Revolutionaries, based at Samara.

These events caused the Moscow government to crack down heavily on non-Bolshevik socialists. The Menshevik and Socialist Revolutionary deputies were expelled from the central and local soviets and prevented from engaging in any organized political activity. Eventually, in September, the government proclaimed a campaign of “Red terror,” including shooting hostages and giving increased powers to the Cheka (political police) of summary arrest, trial, and execution of suspects.

Assassination Of The Tsar And The Battle For Ukraine

Among the early victims of the civil war, which may be considered to have begun in earnest in June 1918, were the former imperial family. Tsar Nicholas II, his wife, and his children had been moved in August 1917 to Tobolsk and in the spring of 1918 to Yekaterinburg. With the development of anti-Bolshevik forces in Siberia, the local soviet feared that Nicholas might be liberated. In the night of July 16–17, 1918, all the members of the family were taken to the cellar of their prison house and shot.

In the late summer the Communists’ hastily reorganized armed forces, the Red Army, recovered most of eastern European Russia. At Omsk, which became the centre of the anti-Communists, a new army was hastily trained under the command of Adm. Aleksandr V. Kolchak, with the assistance of British and U.S. military missions.

Meanwhile the British forces at Murmansk were at war with the Communists. In August further British forces landed at Arkhangelsk, and the Japanese forces in the Far Eastern territories of Russia had been greatly reinforced.

In Omsk relations between the Socialist Revolutionaries and Kolchak steadily deteriorated. Kolchak and his officers disliked the left-wing views of the politicians and found it difficult to distinguish between Socialist Revolutionaries and Communists, lumping together all “Reds” as enemies. The conflict came to a head when, on November 18, 1918, Kolchak set up his own dictatorship. Kolchak’s coup d’état coincided with the collapse of Germany and the end of the European war.

At the beginning of 1919 Red Army forces invaded Ukraine. The remnants of the forces of the Socialist Revolutionaries, headed by Symon Petlyura, retreated westward, where they joined forces with Ukrainian nationalist forces from formerly Austrian Galicia.

For the next months the mixed Petlyurist-Galician forces held parts of Ukraine; other areas were in the hands of anarchist bands led by Nestor Makhno; and the main cities were held by the Communists, ruling not directly from Moscow but through a puppet Ukrainian “government” in Kharkov (now Kharkiv).

The defeat of Germany had also opened the Black Sea to the Allies, and in mid-December 1918 some mixed forces under French command were landed at Odessa and Sevastopol, and in the next months at Kherson and Nikolayev.

The Allied governments now had to decide on their policy in the confused Russian situation. The original purpose of intervention, to revive an eastern front against Germany, was now meaningless. Russian exiles argued that, since the pre-Bolshevik governments of Russia had remained loyal to the Allies, the Allies were bound to help them. To this moral argument was added the political argument that the Communist regime in Moscow was a menace to the whole of Europe, with its subversive propaganda and its determination to spread revolution.

At the beginning of 1919 the French and Italian governments favoured strong support (in the form of munitions and supplies rather than in men) to the Whites (as the anti-Communist forces now came to be called), while the British and U.S. governments were more cautious and even hoped to reconcile the warring Russian parties.

In January the Allies, on U.S. initiative, proposed to all Russian belligerents to hold armistice talks on the island of Prinkipo in the Sea of Marmara. The Communists accepted, but the Whites refused. In March the U.S. diplomat William C. Bullitt went to Moscow and returned with peace proposals from the Communists, which were not accepted by the Allies. After this the Allies ceased trying to come to terms with the Communists and gave increased assistance to Kolchak and Denikin.

Direct intervention by Allied military forces was, however, on a very small scale, involving a total of perhaps 200,000 soldiers. The French in Ukraine were bewildered by the confused struggle between Russian Communists, Russian Whites, and Ukrainian nationalists, and they withdrew their forces during March and April 1919, having hardly fired a shot. The British in the Arkhangelsk and Murmansk areas did some fighting, but the northern front was of only minor importance to the civil war as a whole.

The last British forces were withdrawn from Arkhangelsk and from Murmansk in the early fall of 1919. The only “interventionists” who represented a real danger were the Japanese, who established themselves systematically in the Far Eastern provinces.

Victory Of The Red Army
In the first half of 1919 the main fighting was in the east. Kolchak advanced in the Urals and had attained his greatest success by April. On April 28 the Red Army’s counteroffensive began. Ufa fell in June, and Kolchak’s armies retreated through Siberia, harassed by partisans. By the end of summer the retreat had become a rout.

Kolchak set up an administration in November at Irkutsk, but it was overthrown in December by Socialist Revolutionaries. He himself was handed over to the Communists in January 1920 and shot on February 7.

Meanwhile, in the late summer of 1919, Denikin had made a last effort in European Russia. By the end of August most of Ukraine was in White hands. The Communists had been driven out, and the Ukrainian nationalists were divided in their attitude to Denikin, Petlyura being hostile to him, but the Galicians preferring him to the Poles, whom they considered their main enemy. In September the White forces moved northward from Ukraine and from the lower Volga toward Moscow.

On October 13 they took Oryol. At the same time, Gen. Nikolay N. Yudenich advanced from Estonia to the outskirts of Petrograd (St. Petersburg). But both cities were saved by Red Army counterattacks. Yudenich retreated into Estonia, and Denikin, his communications greatly overextended, was driven back from Oryol in an increasingly disorderly march, which ended with the evacuation of the remnants of his army, in March 1920, from Novorossiysk. In April 1920 an alliance between Petlyura and Polish leader Józef Piłsudski led to a joint offensive that overran much of Ukraine and sparked the Russo-Polish War.

In 1920 there was still an organized White force in Crimea, under Gen. Pyotr N. Wrangel, who struck northward at the Red Army and, for a time, occupied part of Ukraine and Kuban. The Red Army eventually battered Wrangel’s forces, whose rearguards held out long enough to ensure the evacuation of 150,000 soldiers and civilians by sea from Crimea. This ended the Russian Civil War in November 1920.

Consequences Of The War

The Communist victory was at the same time a defeat for the various nationalist movements of the non-Russian peoples. The hopes of the Tatars and Bashkirs, between the Kazan area and the southern Urals, were ruined in the course of the civil war. The Communists proclaimed the right of self-determination, but in practice they imposed the dictatorship of the Russian Communist Party on them.

In Tashkent the Muslim population remained mistrustful of any Russian authorities, and for some years guerrilla bands of nationalists, known as Basmachi, harassed the Communist authorities.

Russia had ceded parts of Transcaucasia to the Ottoman Empire as part of the Treaty of Brest-Litovsk, but this only served to spark a temporary revival of the three separate Transcaucasian republics—Azerbaijan, Armenia, and Georgia—in May 1918.

The Moscow government did not intend to respect Transcaucasian independence for long. In April 1920 the Azerbaijan government surrendered to the double threat of invasion by the Red Army and rebellion in Baku. In December 1920 the formerly Russian portion of Armenia was incorporated into Soviet Russia, and the Moscow government recognized the rest of Armenia as part of Turkey. From February to April 1921 the Red Army invaded and conquered Georgia.

For the territory around Lake Baikal and east of it, from the spring of 1920, the fiction of a Far Eastern Republic, independent of Soviet Russia, was maintained. This government was in practice fully controlled from Moscow. The Japanese delegates at the Washington Conference of 1921–22 promised the U.S. government that they would withdraw all their troops from Russian territory.

This they did at the end of October 1922. The Far Eastern Republic had now served its purpose, and its assembly in November formally voted it out of existence and united it to Soviet Russia.

The political system that emerged victorious from the civil war bore the name Russian Soviet Federated Socialist Republic. In fact the soviets were of small importance.

All power belonged to the Communist Party, members of which occupied all the posts in the Soviet of People’s Commissars and the key posts at all lower levels of the machinery of government. The party itself was governed by its Central Committee, which Lenin dominated.

Second only to Lenin was Trotsky, who as commissar for war not only had supreme command of the armed forces but was also largely responsible for organizing supplies and for the mobilization of manpower. By 1919 the Red Army had become much better than the armies of its White opponents. The victory of the Communists in the civil war is indeed mainly due to this simple fact of military superiority, reinforced by the fact that, holding the central core of European Russia throughout the war, they could plan operations and move men more easily than their enemies, whose bases were on the periphery and cut off from one another.