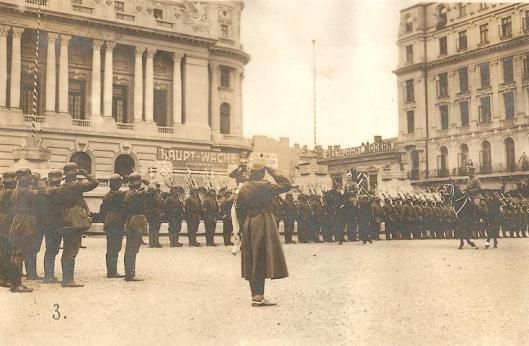 Between 1916 and 1918, the countless forced requisitions by the German occupation forces and the cruel exploitation of Romania’s resources took its toll on the civilian population. In order to export to Germany as many Romanian agricultural products as it could, the military administration introduced a strict rationalization of food consumption.

Occupation forces introduced bread and meat cards. In cities with over 5.000 inhabitants, the population was entitled to 400 grams of bread per capita and 200 grams of meat per week. From April 1, 1917, the meat ration was reduced to 150 grams per week. In order to be supplied with the necessary food for its survival, the urban population tried to evade the watchful eyes of the German administration and bought food directly from the peasants, bypassing regulations put in place.

However, peasants were also confronted with restrictions imposed by the military administration. They were required to declare and hand over milk and eggs on certain days of the week and were allowed to keep for themselves only a small portion, just barely to feed their families. In addition to cereals, milk and eggs, the occupation forces gradually started requisitioning other products, such as sugar and wine. In addition, the slaughter of domestic animals and poultry was also prohibited, leading to a decline in meat consumption in the occupied territory. Still, the sources for textile fibres (flax, hemp, wool) were also requisitioned by the occupants, so the peasants were forced to wear rags.

In addition to foodstuffs, the civilian population in the occupied territory suffered from a lack of industrial products. All industrial enterprises were seized by the occupiers, and countless industrial products and machinery were shipped to Austria-Hungary and Germany. According to a “Secret publication by the Austrian War Ministry”, printed by the Vienna State Printing House in 1918, the decision to ship oil products to the Austro-Hungarian Empire was taken as early as October 1916. Quantities required for monthly shipment were 2285 tonnes of gasoline and 4150 tonnes of petroleum.

Dead domestic animals, handed over to the occupation forces

Writer and politician Vasile Th. Cancicov, a witness of the German occupation, noted, with understandable revolt in his diary, the numerous restrictions imposed on the Romanian civilian population: