The 1914 Miraculous Battle of the Marne 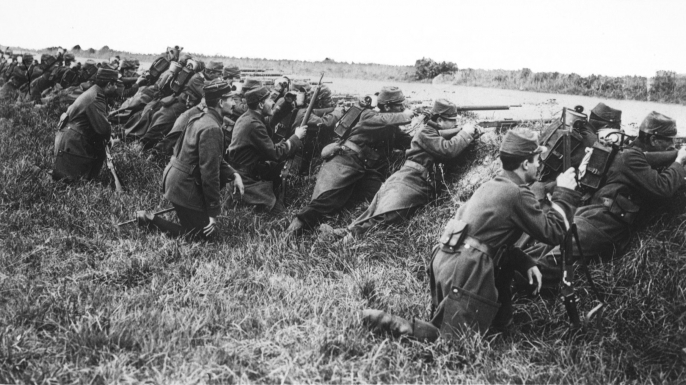 One of the most spectacular battles of the Great War was consummated on the Marne where the Entente inflicted a great loss on the troops of the Central Powers. The fight on the Marne followed the battle of the frontiers of August 1914 which represented the foremost advance of the German troops on French soil. A Franco – British coalition managed to deter the German Imperial Army to abandon its plans to attack Paris and to retire north, thus creating the conditions to the trench warfare of the following four years on the Western Front.

The battle for the frontiers is a general name given to a series of operations which began on August 4th, 1914 on the Franco – German border and in Southern Belgium. These battles preceded the Battle of the Marne which enabled the German Army to invade Belgium and North – East France thus managing to strategically place themselves within 50 km of Paris. The German operations were carried out according to the Schlieffen Plan which imagined objective a speedy defeat of France in the West so as to enable the German Army to turn eastwards against Imperial Russia.

As Berlin’s troops were approaching the French Capital, Paris was expecting to face the German siege. The 5thand 6thFrench Armies led by Joseph Joffre and the British Expeditionary Force (BEF) arrived at the south of the river Marne after 12 continuous days of withdrawal from the Central Powers. At that time, the commander of the 1stGerman Army Alexander von Kluck received instructions to encircle Paris from the East. The Germans and the French thought it was only a matter of time before the Central Powers would be victorious and because of this, the French Government moved to Bordeaux.

The Allies gathered from the information their reconnaissance troops sent that between the 1stand 2ndArmy, Von Kluck opened a 48 km breach in the German line. On September 4th, a very calm Joseph Joffre decided to take on Gallieni’s (the military governor of Paris) recommendation of launching a counter-offensive against the German troops with the aid of the British led by Sir John French. Some troops of the BEF as well as the 5thFrench Army were sent to bridge the gap between the German Armies while the right wing of the 5thArmy attacked the 2ndGerman Army.

The German forces still hoped to breach the line of the 6thFrench Army during the time between 6thand 8thSeptember. The 6thArmy had been supplemented on September 7thwith almost 10.000 French reservists brought by ship from Paris. Also, General Joseph Gallieni sent 6.000 by taxi from Paris. Besides their strategic role in the battle, the “Taxis de la Marne” would become a French symbol of unity and national solidarity. On the evening of September 8th, general Franchet d’Esperey led the 5thArmy in a surprise attack against the 2ndGerman Army thus widening the gap between the two Armies of the Kaiserreich.

On September 9th, it seemed that the 1stand 2ndGerman Armies would be encircled and destroyed. When General von Moltke heard that the German Armies were facing such a danger, he suffered a nervous breakdown. His subordinates took the command and ordered the troops to retire to Aisne, in order to regroup and organize a new offensive. The Germans were followed by the French and British troops, even though they reduced the advance to 19 km per day. After 64 km, the German troops stopped north of the river Aisne where they prepared the trenches which would be used in the following years of the war. Yet, the German withdrawal of September 9th– 13thwas, in effect, the abandonment of the Schlieffen plan thus making von Moltke report to the Kaiser that “Your Majesty, we lost the war.”

Over 2 million soldiers fought in the Battle of the Marne in 1914 and almost 500.000 were either killed or wounded. The French ended up with 250.000 casualties of which 80.000 were murdered. The British lost 1.700 soldiers of 13.000 people fighting in the BEF. The Germans suffered as many casualties as the Germans. No other battle on the Western Front would have as many casualties per day as the Battle of the Marne did.