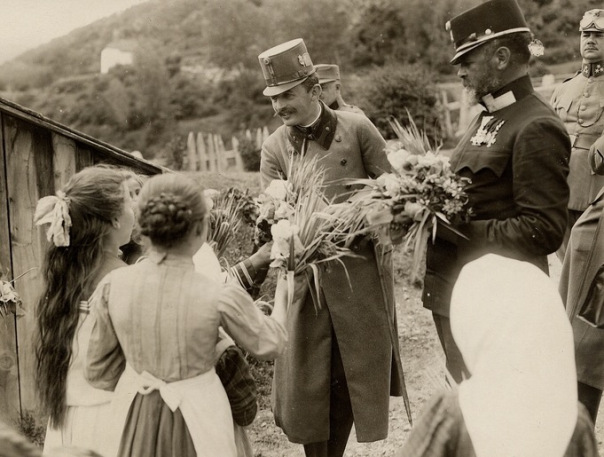 Between October 28 and November 3, 1916, the city of Cluj received the visit of the last member of the Habsburg dynasty to become Emperor: Archduke Charles, the crown prince of the Austro-Hungarian Empire.

At the time of the visit, Romania had already entered the war and fighting was underway on an alignment between Orșova and Vatra Dornei, most of Transylvania being once again under Austro-Hungarian control. The Austro-Hungarian troops in Transylvania were reinforced by German troops led by General Erich von Falkenhayn, who would later have a decisive role in the offensive against Romania.

The Austro-Hungarian forces on this front were under the supreme command of the Archduke Carol, and under the direct command of General Ars von Straussenburg, who first installed his headquarters in Cluj, then moved it closer to the front line in Odorheiu Secuiesc.

In this context, the Archduke went on an inspection of the troops under his command starting from the north and going as far as to the south. He was in Cluj between October 28 and November 3, 1916. From here he went to Petroșani, where he arrived on November 5.

According to the newspapers of the time, Archduke Charles used the visit to Cluj to talk to the Transylvanian officials, and even to enjoy a movie theatre show while his wife, Zita, who visited the hospitals, encouraging and consoling the wounded.

Thus, on the second day of his visit, the Archduke received a delegation of important people from the city and the county, including politicians, aristocrats, academics and magistrates. During the meeting, the crown prince inquired on the harvest in Transylvania, the fate of the refugees on the front, the majority of them Székely, the state of the courts, the university’s activity, but also on the hunting possibilities in the area. From among the prelates, the archduke spoke, in Hungarian, with the Greek-Catholic deacon Tullius Roșescu.

From the hospital to the theatre

As for Princess Zita, she visited a hospital each day, avoiding any protocol and going to the bed of every sick person, as the local press reports.

Romanian soldiers of the Austro-Hungarian army were not present in Cluj, because the imperial regiments with Romanian troops had been moved from Transylvania to the Italian front, in order to prevent any conflict of loyalty and conscience. However, there were Romanian troops in the hospitals, wounded prisoners caught during the battles with the Romanian army units that crossed the Carpathians. Twenty soldiers and six officers were hospitalized at one of the hospitals visited by the princess. In a remarkable gesture, she visited not only the wounded imperial troops, but also the six Romanian officers, and it seems that she spoke to them in Romanian. In addition to hospitals, Princess Zita also stopped at the Franciscan monastery.

During the visit, the princely couple walked at one point through the central square of the city, now Unirii Square, but the climax of the visit was the participation at a performance at the National Theatre on Thursday, November 2. During this show, the director of the theatre, the legendary Janovics Jenő, a pioneer of cinematography, “presented the latest images from the battlefield”.

On November 21, 1916, 17 days after the visit of Archduke Charles to Cluj, Emperor Franz Joseph died at the age of 86. The Archduke succeeded him at the throne, being crowned as Charles I as Emperor of Austria, and Charles IV as King of Hungary. Also, in November 1916, German troops broke the front in the South Carpathians, and in early December, Bucharest was occupied by German troops.